The rain final stopped late morning so enabling me to take a walk up the Hamble River to the conservation area and back, even though with the tide only on the ebb for the past hour or so no beach to provide food albeit some of the river’s grassy banks were now exposed.  Cloudy and breezy but nor dull as I started out.  Initially, nothing but a few Black-headed Gulls but once at the grassy banks not only more resting individuals but also a couple of Herring Gulls.  Then, to my delight, over a score of sleeping Black-tailed Godwits.

Once up at the conservation area a few more Black-headed and Herring Gulls but also the remaining flock of Black-tailed Godwits to bring the number present up to just over an hundred compared to the 70 plus Black-headed Gulls.  Also present a trio of Grey Plover and a single Oystercatcher along with a Heron and quartet of Little Egrets.  Time to start the return journey and before reaching the grassy banks in the river an encounter on the path with a very close pair of male Northern Wheatears,  Then, on the grassy banks, a couple of Dunlin and no less than 30 Ringed Plovers.  Add the occasional Carrion Crow, a pair of Mallard and a quintet of Wood Pigeon and it proved to be an enjoyable fifty minutes or so.

Lunch finished, car packed and all sorted so time to make my way to Portsmouth to catch the evening ferry to Bilbao.  A beautiful bright and sunny evening as we set off and rounded the Isle of Wight with many Black-headed and Herring Gulls to be seen.  Then time to settle down for the evening and prepare of the two night journey.

Friday morning saw me in front of the foremost window in the dining room just north of Finistere in the Bay of Biscay. No camera or bins of course and, therefore, through the clean (for a change) window not just the occasional Manx Shearwater but suddenly many score all gathered together along with a handful of Gannets in what appeared to be a feeding frenzy,  And, at the same time, the arrival of eight Dolphin (or were they Porpoises?) to join in the entertainment.  Most of the mid-morning was then spent relaxing on the aft deck watching the many Gannets circling around the back of the ship.  The great majority seemed to be immatures with their mottled plumage with just the occasional adult and juvenile. 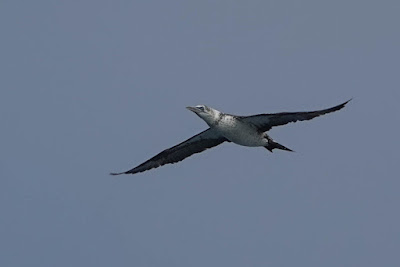 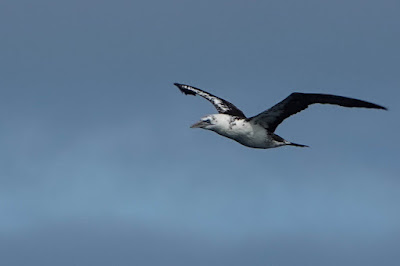 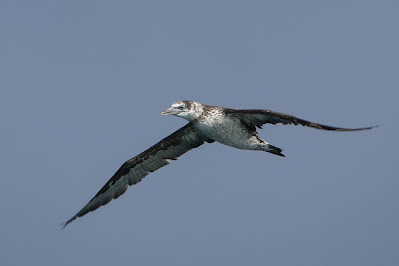 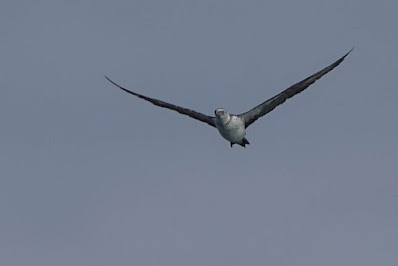 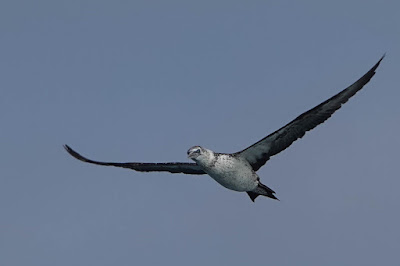 Posted by Bob Wright - The Axarquia Birder at 08:59