At last, finally to not only try out the new, waterproof walking shoes but actually go for a walk with virtually no pain.  Hopefully, now fully fit by the time the present few rainy days are completed.  So gone noon when I set out along the shore at Warsash and on past the Spit to the "Scrape" and "Meandering Pool" behind the shore on Southampton Water.  The temperature said 9C but in the strong wind, and sun in my face as I walked southwards, it felt more like 3 or 4C!  All very quiet initially with just the odd Redshank and occasional Black-headed Gull plus a Carrion Crow.

However, reaching the School of Navigation a flock of 18 foraging Ringed Plover on the exposed mud at low tide and then, approaching the spit with the channel in front, the first of the massed packs of feeding birds.  A few Oystercatchers, Curlews and Redshank along with a couple of Grey Plover and scores of Black-headed Gulls.  Just the single Turnstone but a dozen of Shelduck feeding in the distance.

On the stream itself a large flock of Wigeon which were later joined by a handful of Teal.  In addition to the Black-headed Gulls, a few Herring and a couple of Common Gulls. 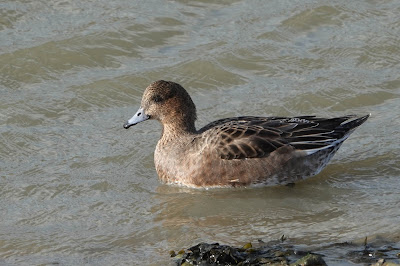 Once at the Spit and able to check the uncovered beach on the seaward side, a large flock of Brent Geese and very many Oystercatchers along with mainly Herring Gulls.

The walk along the shore to the Scrape, noting the singing Sky Lark on the way, produced not only a couple of Mute Swans and Canada Geese but also 26 Pintail.  Also on the water a Coot and a few Brent Geese.  By contrast, the Meandering Pool held just a trio of Shoveler.

So back the same way to Warsash.  A visiting group from the Wokingham Bird Club had informed me at the Spit  that there was a feeding Red-breasted Merganser in the stream I had just passed when they were passing less than thirty minutes previous.  A keen watch-out as I walked around the track and then, just before reaching the School on Navigation pier, my scanning paid off as I found the bird way out at the edge of the main water. Way to far away to photograph, especially as it was spending most of the time below water but, nevertheless, seen through the bins.  No sooner seen than I added both Wood Pigeon and Cormorant and a female Kestrel came to rest in the tree immediately in front of me.  Strangely, the raptor remained long enough for me to actually get  photograph; what an obliging lady!

Posted by Bob Wright - The Axarquia Birder at 03:20