The phrase, "It's an ill wind......." comes to mind as I write this report on the visit to the Charca de Suarez in Motril.  Having left later than I intended for the afternoon opening and only a quick dash down Camino Patria to the entrance I arrived just a few minutes after 4 to only discover that come February the opening times go back an hour and, as a result, I now had just about an hour to occupy myself before the gates were opened by Manu.  No brainer really as it meant I could both visit the entrance to Salobrena golf course and check out the lake and then carry on and make a much slower drive down my favourite camino, even a one way drive down Turtle, hence forth Crap, Alley and back to the Charca entrance.  And all in brilliant sunshine, calm and very warm.

Entering Camino Patria I had a Kestrel on the wires quickly followed by a couple of Collared Doves. Making a short stop near the recently planted fields I picked a lovely male Stonechat and watched the mixed feeding flock of Serin and Goldfinches. My attention was drawn to the dark specs in the sky which gradually lost height and came closer and not only identified the raptors as a Booted Eagle and a Buzzard but the former seemed determined to drive the latter away.  Then moving on the Charca I passed both Blackbird and Spotless Starlings and discovered that the gates were firmly locked.

Back in the car and the very short drive along the beach front to the golf course.  The site looked beautiful as I counted about 50 Black-headed and maybe a dozen Yellow-legged Gulls. Grazing on the grass at least three score Common Coot and the occasional White Wagtail.  On the far side a score of Spotless Starlings and then, on the water at the far side, a Little Grebe.

No sooner had I restarted my drive eastwards along Camino Patria than I had Rock Doves and a regular supply of Chiffchaff.  Stopping at the same spot as less than thirty minutes ago the Goldfinches and Serins were still active and there were a couple of Stonechat on display.  The larger raptors had moved on but I was pleased to welcome a quartering Marsh Harrier on my left. A stop just before Crap Alley produced a good-sized feeding flock of mainly Common Waxbill but including a few Red Avadavats. All very quiet making my way down Crap Alley trying to avoid the massive amount of fly-tipping and rewarded with both Collared Doves and House Sparrows as I reached the main road.

Before entering the reserve I took a quick look at the beach which now seemed to hold a number of large, shallow ponds; from whence they came who knows!  But nothing to add other than more White Wagtails. As soon as the gates were opened I went straight to the Laguna Taraje where I found a very large flock of Mallard. Also present a couple of Shoveler and both Moorhen and Coot along with a single Little Grebe.  Even the lone Purple Swamphen was resting at the top of the tall reeds.

Just a handful of Shoveler at the far end hide so straight on the Laguna del Alamo Blanco.  Not the sunning Terrapin in front of the hide but a resting Muscovey Duck.  First time I have seen this species here or anywhere else nearby so can only presume it has flown in rather than escaped some local property.  At the back a couple of Teal and then the Snipe relocated from hidden grasses giving a better view.  Searching the far back I found a lone Heron and then watched a dark shape swimming, mainly submerged across the water to the far right.  What on Earth could it possibly be; an Otter perhaps?  (See pictures below and draw your own conclusions.)

Walking towards the main hide overlooking the Laguna de las Aneas I had a Robin on the path and upon arriving was surprised to see well over sixty Cormorants on the water, taking up every perching spot available.  Los of Common and few Red-knobbed Coots plus more Moorhen and a couple of Little Grebe.  Duck species were mainly Mallard but also a good number of Shoveler and a single Pochard at the back.  However, centre of attention was the island immediately on front of the hide where, in addition to Mallards and Shoveler there rested three Glossy Ibis.  To their right a quartet of Little Egret and another individual towards the back along with a Heron. 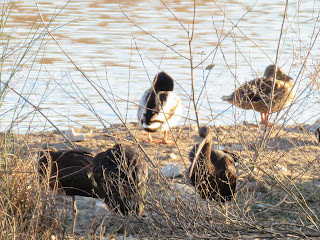 Leaving the main hide I stopped to admire the Chameleon that was so completely camouflaged it took me ages to see it even though its was barely four feet away.  About six inches, fifteen centimetres, in length and completely green amongst the similar coloured leaves. So on to the northern hide overlooking the Laguna del Trebol where I found mainly Red-knobbed rather than Common Coot.  More Moorhen and lots of Chiffchaff in addition to a plentiful supply of White Wagtails.  Not too many Shoveler but then the appearance of three Ferruginous Duck to liven up the early evening. On the far island with the Shoveler a resting Green Sandpiper and then the arrival of a Grey Wagtail before I walked round to the hide at the other side of the water.

Relatively quiet other than the White Wagtails and occasional Red-knobbed Coot but, after patiently waiting, a Cetti's Warbler put in an appearance.  The final hide at the Laguna del Lirio not only produced a half-dozen Gadwall but also a further four Ferruginous Ducks - not to mention White Wagtails and Chiffchaff.

Finally. on my way back to the exit I stopped to join a few others observing three tiny Leaf Frogs, no larger than half the size of little finger.  At this point, and with the light going, the camera battery gave up so took a chance with the phone, the result of which looked fine on the phone but poor when emailed over.  And as I left the reserve two large flocks of Cattle Egret were entering for their night roost. Nevertheless, a most enjoyable afternoon with 40 species recorded. 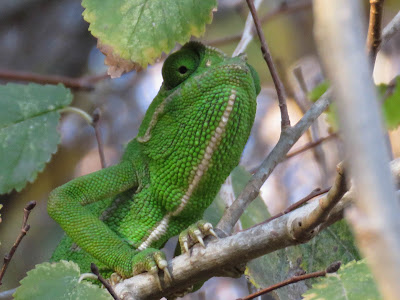 Is it or is it not an Otter? 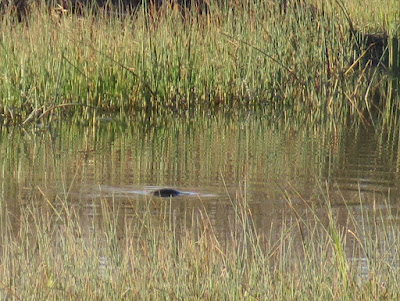 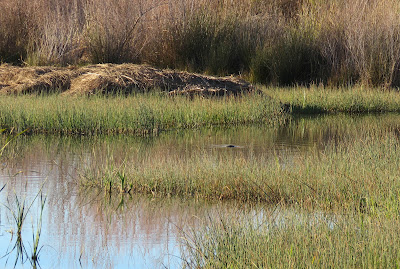 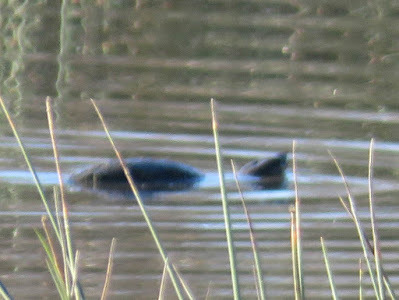 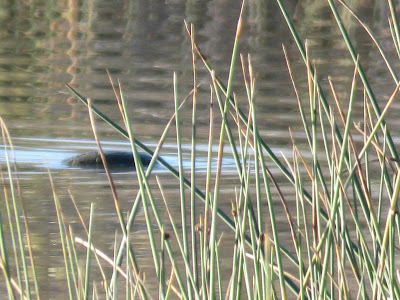 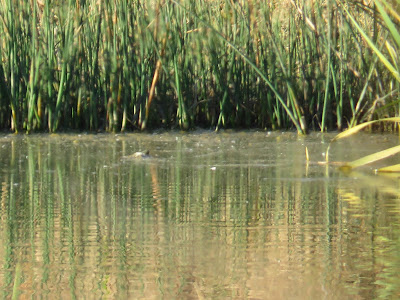 Posted by Bob Wright - The Axarquia Birder at 10:12