Different walk this morning. Took the bus to A27 bridge over the River Hamble and then walked back down steam to Warsash,  The main problem was that once at the riverside it was neither that much warmer nor less windy than I had previously thought.  Perhaps not the best choice of clothes but at least I was wearing an extra body-warmer! On the hand, at least it was dry rather than the expected further rain and the Sun did try and put in an appearance.  Once at the water's edge the first observation was that it seems to be only further upsteam and away from the mud flats that I find both Mallard and Gadwall and, further on down the river, most noticeable that the large flocks of both Wigeon and Teal seem to have split up into smaller groups, but still good numbers of both.  Brent Geese were both the first and last sighting along the river complete with small groups all the way south.

Having seen the first handful of Brent Geese they were quickly followed by a small flock of resting Black-headed with a couple of Herring Gulls.  Moving round the first bend I found a pair of Mallard, and another pair a few hundred metres on, followed by a pair of Gadwall.  Indeed, just a few minutes later another quartet of Gadwall resting with a first year Mute Swan rapidly coming into its white feathering.  Meanwhile, on the land side of the track, a first Wood Pigeon before find a larger group  later on, whist foraging under a slipway a lone Turnstone.  But the biggest surprise was the bare tree in the adjoining wood that held a collection of dark shapes at the top.  Without a scope, the birds appeared too small to be Carrion Crows which are found in abundance yet too large to be Starlings. having counted a dozen and conformed jackdaws I was somewhat surprised to see the end bird on the left (see photograph) appeared to have a white front.  Most odd.  But all was revealed when I enlarged the photograph on the computer upon returning home to discover a male Peregrine Falcon. Now that really was a great find for the morning.

So back on the trail and not only more Brent but a handful of Canada Geese, one on the water and the others in a field on the opposite side of the track.  The first Redshanks were recorded and soon after the first of the many small groups of Teal.

By now I had reached the conservation area which was surprisingly quiet with just a couple of Teal and a few Black-headed and single Herring Gull. On the water the first of the Wigeon and also a first Curlew of the morning.  Watching the Curlew feeding around a large rock I could not but help smiling as the bird crossed its legs performing some perfect dance steps!

Black-tailed Godwits were then seen including a good-sized collection just off the shore. After more and more Wigeon were encountered I was near the muddy islands where I first found a single Grey Plover ad below it a few of the hundred plus feeding Dunlin.  On the meadow side of the path a lone Greenshank appeared right in front of me and at the same time I discovered the camera battery was flat.  Now isn't that just typical birding!

There was only the one Oystercatcher to be seen all morning but the first Carrion Crow was next to put in an appearance.  A single Little Grebe was working the now flooded bay and leaving the waterside and more Brent Geese I took the narrow path back towards the house noting the Magpie sitting atop a chimney on a neighbouring house. 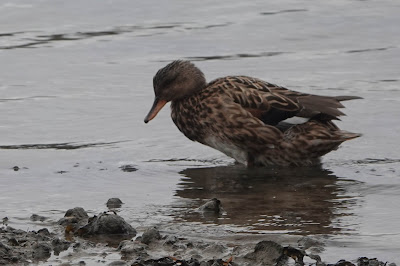 Posted by Bob Wright - The Axarquia Birder at 13:32