Following a n early morning coffee with my dear friend, Mick Richardson near Moraleda, we set off for a morning's birding in the Upper Cacin Valley with a number of target species in mind and by the time we returned to Huetor Tajar all and more had been recorded. The morning was calm and completely clear with a warming sun, albeit only 1C when we set off but by mid-afternoon in the mid-twenties.  As soon as we left the small road and headed along our first track we immediately had a bush full of Blackcaps, House Sparrows and Serin. Collared Doves on the roof of the neighbouring building and then on to quickly stop as we recorded both Greenfinch and the fist o very many Chaffinch for the day.  Next the first Great Tit then many Goldfinches along with a Sardinian Warbler as we made our way through the open almond fields and olive groves.

Stopping to observe both Black Redstart and Robin along with more Blackcaps our attention was drawn to the small raptor in the sky immediately on front of the car.  Normally a Merlin is off like greased-lightening but this individual seemed to cope with the mobbing by a couple of Jackdaw and then a Magpie by circling, flying up then down as it tried to get rid of the pesky individuals.  All, of course, to our benefit a we had long and clear views of the nearby action.  Continuing on we were to see many more Magpies plus numerous Linnets and Goldfinches along with Corn Bunting and even three Iberian Grey Shrikes.  A few Mistle Thrushes made a change along with Stonechat, Thekla Lark and Meadow Pipit.

Approaching the old farm ruin I was able to spot the resident Little Owl as we searched for the local Black-bellied Sandgrouse we had many White Wagtails and Calandra Larks.  Then the Sandgrouse were in the air.  First a trio followed by a quartet and finally a singleton.   As you will see from my attempt using a small bridge camera, nothing more than a distant record shot but Mick managed to get some gorgeous shots and even identify all the birds as female other than the singleton male.  My thanks to Mick for permitting me to use some of his shots.

Now for those taken by Mick Richardson: 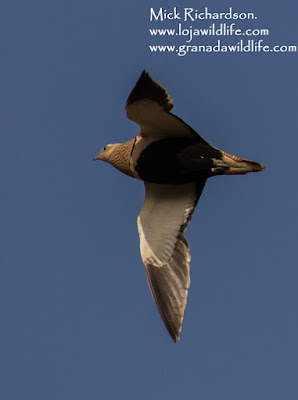 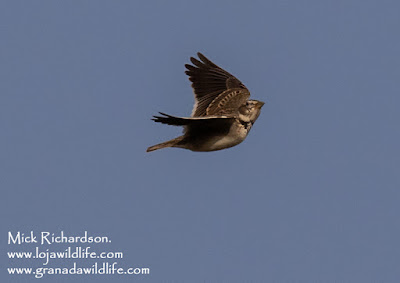 Moving on we came across a single, looking lost, Lapwing and then the first Sky Lark. By now we seemed to be seeing more Song Thrushes than we might otherwise have thought and then stopped to check a large mixed gather of starlings on the wires at a crossroad.  Mainly Spotless but at least eight Common Starlings. A Jay flashed across the narrow road and then we were at the next ruined farm with open views around.. Not so much the many Jackdaws, a couple of Black Redstarts but the distant soaring Golden Eagle was the main talking point.  A stop at a favourite site on this occasion only produced one Little Owl to add t the four already observed. 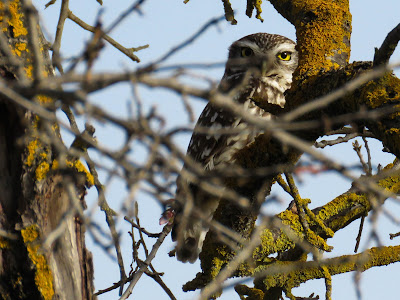 The usual viewpoint produced no raptors but, rather than many Feral Pigeons, we had the sight of over a dozen "pure" Rock Doves on the roof of an isolated farm building.  Needless to say we had already seen hundreds of Wood Pigeons during our travels.  Leaving a Hoopoe watching us from afar we set off but then stopped to check the small shape atop a pylon and, sure enough, a Black-winged Kite. The bird even remained whilst we circled round and found a concealed track amongst the olive trees to get a closer look. 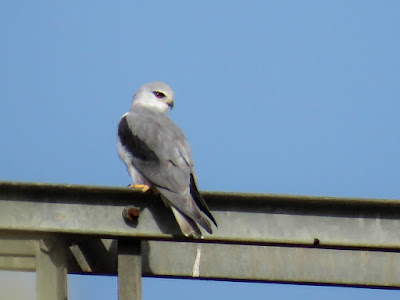 Working our way round the hill tops above Cacin we eventually found a number of Buzzards and even a Sparrowhawk.  Finally a Kestrel and then, on very close study, the only Blue Rock Thrush of the day.  Lots of Chiffchaff about along with our first Blackbird but just the one Crag Martin.  Finally, a few more Blue Tits before heading towards the reservoir and thank goodness we had been fortunate enough to also see a Bonelli's Eagle.

Looking at the water immediately after an Iberian Green Woodpecker had crossed the road in front of us, the most obvious observation was that of the large number of White Wagtails, but soon we had added a trio of Green Sandpiper along with both Moorhens and Coots.  The first of three Marsh Harriers drifted across and, using the scope, picked out good numbers of Shoveler, Pochard and Teal.  Double-checking, we found that the single Snipe had now increased to seventeen individuals.  After much searching to find the calling bird we did both get a short but clear of the Water Rail.  At the far end just the single Cormorant.

heading on to stop at the bridge over the outflow, we picked up our first "obvious" Redwing along with Long-tailed, Great and Blue Tit.  There were also many Blackcaps as we walked the edges of the track. The final stop in this area was to check for small birds amongst the pine trees but not before finding a Brambling watching us as we got out of the car.  Firecrests, Crossbill and Crested Tits were added to our sightings of the day.  Lovely to see the many flowering Broad-leaved Irises in the hills.

Time to head back to Huetor Tajar where we stopped to find a pair of Stone Curlew before travelling up past Mick's house to Cerro Hacho. Here we heard Red-legged Partridge bur saw numerous Chaffinches along with many Serin and Siskins.  A Wren and Sardinian Warbler put in appearances along with both Meadow Pipit and Stonechat.  Naturally, there were also many Blackcaps and a plentiful supply of Great Tits.  We could hear the Crossbill and finally located a pair on the very high wire above us.  This was also the site that finally delivered a supply of Iberian Magpies along with Coal Tits, a Short-toed Tree-creeper and a Rock Bunting.

Time to head back down to Huetor Tajar for our final bird of the day.  No sooner had we started to cross the river than we met John and Jenny Wainwright driving down the riverbed.  Time for a welcome break and exchange sightings and views, etc before parking up to find a trio of Little Bustards just past the single Grey Heron.  The riverbed behind us held many Chiffchaff and White wagtails plus another Green Sandpiper.  Apart form the small number of Lapwing we also found a single Cattle Egret.  This area also produced a Tree Sparrow and many Crested Larks and whilst looking for a possible Great Woodpecker I noticed the Bluethroat foraging further on at the side of the road.

Discovering that we were only two short of eighty species for the da and John and Jenny had seen a pair of Mallards near the parking are above the ford, we moved back in the hope that the site would also provide a local Cetti's Warbler.  Neither was forthcoming so we decided to end our day in the town near the main bridge across the river where there was bound to be a Mallard.  As we set off we stopped to identify the Reed Bunting perched just above a Goldfinch on a roadside bush and noted the pair of Red-legged Partridges next to the ploughed field.  Arriving at the river still no Mallard but we did find the Cetti's Warbler and the added bonus of six Muscovey Ducks resting alongside the resident feral geese.  So all targets achieved with 82 species and 22 new additions to the the list.

Posted by Bob Wright - The Axarquia Birder at 09:30