Off early at 7.40 to make a first visit to the Oysterbeds at Hayling Island by walking the "Billy Trail."  Or, at least, I would have been had I not opened the front door to discover that we had had a serious frost overnight and the car was now a white-out!  A good ten minutes later I finally got under way and was still at the site's car park at the the very north of the island.  Other than being very cold, still only about 6C, it was a glorious, clear and sunny morning and the temperature did finally creep up to double figures albeit I was only on site for a couple of hours.

As can be seen from the above photograph the Billy Trail follows the line of the former railway branch line from Havant to the south of Hayling island.  To the right you can see the present road bridge from the mainland to the island with Langstone Harbour, beyond the bank on the left, to the left and Chichester harbour to the right beyond the road bridge.  The line has long ben lifted (I last visited by train as a schoolboy around 1955) and although the wooden railway bridge has now been removed it is rather nostalgic to see the signal still in place.)

The tide was on its way out leaving much exposed mud upon which numerous Brent Geese were feeding.  Also present many Redshank, a few Oystercatchers and the occasional Curlew. A single Little Egret was also in sight.  No shortage of Back-headed Gulls and as I started off on the trail a Carrion Crow passed inland overhead.

Looking at the first enclosure between bank and the main harbour a small flock of Shelduck and Shoveler were feeding.  Still more Black-headed but also a few Herring Gulls in addition to the constant supply  Redshank.

The next bed held similar birds but now the first of a good number of Pintail.  A trio of House Sparrows were flitting around in the bushes behind m but below by the water my first sighting of the many Black-tailed Godwits that I was about to see. 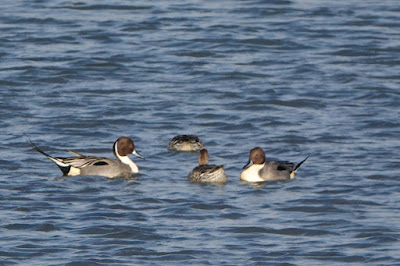 Reaching within sight of the lower car park I now had a series of earth barriers separating the pools with a path that would also take me to the end of  spit with views over the open water.  Some time spent searching these banks with their numerous Black-headed Gulls but then I was on to the main flock of Mediterranean Gulls.  What a lovely sight and so missed since moving back from the Spanish coast in Malaga province where they were the de facto gull of the area.  But still Redshank, Oystercatcher and Curlew to be found.  Nevermind the magpie foraging the ground in front of me my attention was completely focused on the seven Red-breasted Mergansers that had entered the enclosure at the far end.  And yet by the time I had reached the far end for a closer look these birds had moved to the opposite end behind me!

Still checking the shore I found more Black-tailed Godwits and a small flock of Dunlin which also included a few Ringed Plovers. A view of a close Curlew and Oystercatcher before retracing my steps and taking more photographs of the Mediterranean Gulls, finding another quintet of Red-breasted Mergansers and so on to the end of the spit.  The tide was now retreating at a quicker pace and it took some searching before finding the pair of Black-necked Grebes diving in and out of the water about ten metres off shore. 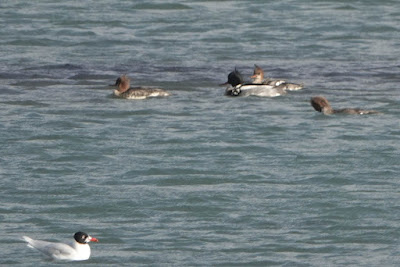 Continuing my walk back to the car park I continued to find the above mixture of waders, gulls and geese including more Little Egrets with both Wood Pigeon and Starling seen on the inland side of the trail.  A lovely experience and next time I shall know to try and visit on the incoming rather than outgoing tide.  Only 21 species but what a lovely selection.

Check out the accompanying website at http://www.birdingaxarquia.weebly.com for the latest sightings, photographs and additional information
Posted by Bob Wright - The Axarquia Birder at 11:13