Hampshire Gales on the Hamble River

It may be that mad dogs and Englishmen go out in the midday sun but we Welshman also go out in gale force winds!  Having survived both Dudley and Eunice as we await the arrival of Franklin, with the sun shining brightley and more blue sky than the little white fluffy clouds Jenny and I ventures out to walk up the Hamble river in Warsash as far as the conservation area.  As soon as we reached the shore with the high water make less than an hour away, we had a small group of Brent Geese along with both Black-headed Gull and Turnstone feeding at the close water's edge.  But that was it for Jenny as she was finding it hard to even stand, so made a hasty retreat back home whilst I carried on.

Very difficult walking with gale force winds and the sun diagonally streaking straight into my face accompanied by the screaming wind wind as it rattled and forced its way through the rigging of the moored yachts on the river itself.  However, there were small groups of both Brent Geese and Wigeon feeding at the water's edge and tucked into the bank of a nearby island a few Redshank and a Curlew along with a couple of Herring Gull.

On the opposite side as the mud flats began to be covered by the incoming tide a number of Teal and our seemingly resident Little Egret. A Kestrel laboured across the path just ahead of me and much of my time was spent trying to stay on said path rather than blown onto the muddy and watery wastes to my right.  A lone Carrion Crow seemed to be facing the same problem whereas at least the few Wood Pigeons remained in the shelter of the earlier trees.

The large shallow water covering the main mudflat to the right in front of Bunny Meadows held not only Brent Geese but a total of 24 Shelduck.  More Teal were found and looking at the large wader at the back in front of the tall grass I realised that I was observing my first Whimbrel of the year.  The conservation held a large gathering of sheltering Black-headed Gulls.  Just outside this tiny harbour a pair of Oystercatchers and both Teal and Wigeon.

Even another Curlew was feeding on a grassy bank to the left. On the river side of the path a single Grey Plover stood out next to the Redshank.  It was whilst walking this last stretch of the path that I encountered the two Rock Pipits.

With the help of the onshore wind the tide was just about in as I made my way back and stopped to watcha gull trying to make headway.  Looked so white that I smiled thinking I had found a Mediterranean Gull but only upon processing the photograph, seemed a shame to waste the opportunity with the bird struggling to make any progress, did I finally find a very thin black edge to the wing so had to reluctantly record another Black-headed Gull.  So just the sixteen species in very difficult weather conditions but telling myself that the exercise did me good! 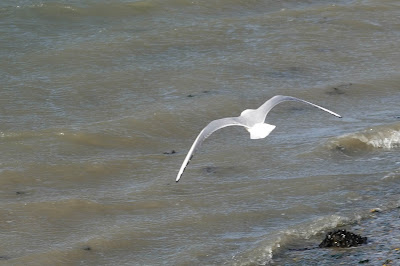 Check out the accompanying website at http://www.birdingaxarquia.weebly.com for the latest sightings, photographs and additional information
Posted by Bob Wright - The Axarquia Birder at 07:42