Up early and down at the mouth of the River Meon on Southampton Water by 7 o'clock with the sun shining, very little cloud and generally calm if somewhat cool for the time of year.  Approaching the shore I had both Wood Pigeons and a Blackbird but the bad news was that, having not checked last night, it was virtually high tide and no exposed mud for feeding waders and water birds. However, parking the ar on the sea wall I could see a small group of Turnstone on the nearest groyne ahead but with he low sun also in the same direction.  Taking a leisurely walk along the top of the bank towards the mouth of the Mean to have the sun behind proved most worthwhile as not only were the neighbouring groynes holding small numbers but on the shore line immediately below numerous resting Turnstones.  Having counted 110 it was time to take a photograph or two and when walking back to the road obvious that there other individuals in the area.  One can only guess at the total number present. 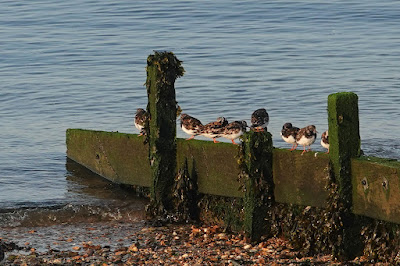 Over the road to the the bridge from where I could see a couple of Mallard and a pair of Great Crested Grebe on the pool in front which forms the lowest point of the adjacent Titchfield Haven bird reserve. In the distance just showing above the tall grasses a single Canada Goose.  As I was about to move on a pair of Gadwall appeared out of the reeds on my right.

Arriving at the viewing point over said pool it was soon obvious that the breeding Common Terns had now departed but still a good number of Black-headed Gulls.  Both Coot and Moorhen on the open water but the few Mallard present seemed to be taken a sleep on the island in front of me.  Whilst a pair of Gadwall moved to the right a couple of resting Cormorant and a Great Black-backed Gull rested on top of the island. The peace was suddenly shattered by the raucus call of a Cetti's Warbler below me that then showed briefly form a bush in front.

The tide was now on the turn and the sea level in the small harbour was rapidly dropping revealing more Mallard and a feeding Rock Dove.  Moving  northwards along the front I noticed that the Turnstones were beginning to disperse so decided time to return home for an early breakfast.  Passing through the outskirts of Titchfield on the narrow, country lane I then recorded a number of Magpie along with a couple of Collared Dove plus Wren, Carrion Crow and an early-feeding Barn Swallow. 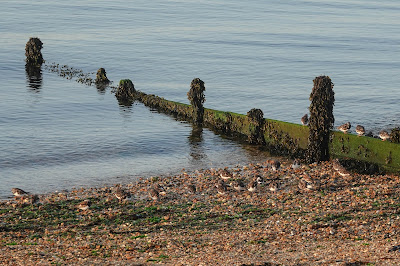 Check out the accompanying website at http://www.birdingaxarquia.weebly.com for the latest sightings, photographs and additional information
Posted by Bob Wright - The Axarquia Birder at 02:11