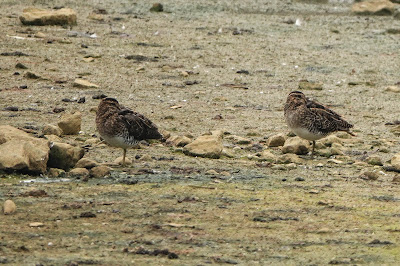 Up with the lark and over to Rutland Water where by 6.30 I was checking out the approach fields and finding scores of Rook, dozens of Carrion Crow and the occasional Magpie.  Naturally, no shortage of Wood Pigeon and tremendous local movement of mainly Greylag Geese but also some Canada Geese. Approaching Egleton church a Pheasant in the field to my left and scores of Jackdaws in the tall trees next to the church itself.  Then I was greeted by the first Blackbird as I entered the car par at the Visitors Centre.  The one advantage of arriving so early in the morning is that you can usually be assured of no other people present and so birds feeding and undisturbed.

Checking out the Feeding Station it was lovely to find that, at last, the feeders have been filled and a little (very little!) management work undertaken.  As a result, Blackbirds feeding below and both Blue and Great Tits on the feeders along with both Dunnock and Robin.  Just a handful of Chaffinch but more will surely arrive as winter approaches.

First stop the Redshank Hide overlooking Lagoon 2 to confirm both the local Sand Martins and a few Mallard.  Off to the right the first Mute Swans of the morning.  Straight on to the Osprey Hide at the far end but nothing new so time to cross over to Lagoon 4.  Walking up to the entrance to Sandpiper Hide a pair of Jay made their way along the hedge to my left; first for many a month.  Once ensconced in the hide, Moorhen close by along with more Mallard.  A large number of Back-headed Gulls and a few Common Tern fishing for their breakfast. Towards the back both Little and a Great White Egret whilst in between a small number of Teal.  Lapwing in smaller numbers were spread out across much of the lagoon.

Moving on to the Dunlin Hide to check the birds at the western end of the water I soon added many Great Black-backed and a few Lesser Black-backed Gulls.  It was now easier to see the many Coot and a good-sized flock of Canada Geese.  More Great Crested Grebe and even a couple of distant Egyptian Geese.  A Chiffchaff or two were calling as I departed and made my way back along the track to my next hide.

Arriving at the Shoveler Hide overlooking Lagoon 3, having observed the feeding House Martins and Barn Swallows above me, there were very many Black-headed Gulls resting on the water along with Lapwing and Mallards.  A single Green Sandpiper to my near left was soon joined a by a further three and then I found the handful of Black-tailed Godwit.   Not just a single Snipe feeding below me but, after checking the whole area, a further ten were discovered. To the far side a Common Sandpiper and then the sudden arrival in the open water in front of the island (where had it been hiding for the past fifteen minutes?) a single Avocet.  It was whilst following the feeding rather than resting Common Tern that I noticed the reed disturbance away to my left and discovered the feeding Sedge Warbler and the newly-arrived lone Heron.  In the meantime, the single Little and pair of Great White Egrets remained at rest.

Next round the corner to the Buzzard Hide to see what might have been at the back of Lagoon 3 and discovered the scores of Tufted Duck along with more Mallard and Great Crested Grebes and a number of Gadwall.  In addition at least a score of Common Pochard on the water.  A second Heron was found and eventually I decided to take a short walk further on to the Crake Hide where even more of Mallard and Great Crested Grebe were settled on the sheltered water.  Above a handful of Common Tern undertaking their regular fishing activities.

Returning towards the Smew Hide I heard the screaming and looked up to find a dozen or so Common Swift feeding relatively low above me.   Amongst them were the occasional Barn Swallow and a number of the, presumably, resident Sand Martin.  It was whilst waiting to enter the Smew Hide that I noticed all the activity in the bare tree to the right of the hide with adjoining tall, but rather open, leaf cover.  Having identified both Willow Warbler and Chiffchaff a Garden Warbler landed on the bare tree and no sooner departed that it was replaced by a Common Whitethroat.  Meanwhile, a couple of female Blackcap were feeding towards the bottom of the trees and those in the leafy trees seemed to be regularly exposed.  As if this "Smorgasbord" of a feast was not enough, a couple of Long-tailed Tits joined in the party and were soon in the company of both Blue and Great Tits.  I seemed to have stood watching for ages before eventually entering the hide and scanning the water.

Back to the Plover Hide overlooking the northern end of Lagoon 4 and immediately found a pair of Little Grebe on the water below me whilst hiding away at the far end a small number of Wigeon.  In amongst the resting Black-headed Gulls away to my left I found the only Starlings to be seen during the whole visit.  And so back to the Visitors Centre where I noticed the many Cormorant on the water in front and a final check on the Feeding Station before heading home taking the ant-circular ride past Lyndon.

A brief stop near the far end of Manton Bay gave me chance to record the resting Osprey on, possibly, its former nest and to the right on the muddy bank a single Redshank plus many more Lapwing, Great Crested Grebe, Mallard, Tufted Duck and Coot.  In the distance more Cormorant and Mute Swans.

The very brief stop at Lyndon Visitors Centre found a score or more Chaffinch on the feeders along with both Blue and Great Tits plus a couple of Goldfinch.  A trio of Dunnock were feeding at the edge of the small pond.  Finally, approaching Edith Weston, I slowed and then stopped as a Buzzard flew across the road and, for once, did not immediately fly away as I took a record shot through the windscreen and then got out, against the light, to take a few more photographs.  It was whilst taking the latter that I realised the "small blob" to the Buzzard's right was a pair of Greenfinch. The end of a very pleasant and successful three hours producing 58 species but no Collared Dove nor House Sparrow!

Posted by Bob Wright - The Axarquia Birder at 10:16