Two early morning walks up the Hamble River at very low tide from the start at Southampton Water finally produced a combined total of 24 species. Whereas yesterday, Friday, was a beautiful, clear and sunny stat at 8am, today a little more cloud at 7.45 which masked the early sun plus a cold breeze from the east.  Good job I had exchanged yesterday's sleeveless for a jumper!  Overall, there seemed to be more bids about yesterday including juvenile Shelduck and half-dozen Rock Doves.  On the other hand, this morning produce the other 16 species plus a single Lapwing, Oystercatchers, the handful of Jackdaw, a flock of Teal rather than a pair and late Collared Dove and Magpie, the last as I approached our new home close to the shore.

Whereas on both walks there were numerous Black-headed Gulls from the off, yesterday I started with a score of Turnstone on the first stretch of muddy beach whilst today the smart waders were fewer and more spread out.  But the Black-tailed Godwits were out in numbers again but probably more widely spread along my two-kilometre walk up stream.  Today an early Greenshank followed by another pair later in the walk.  Lots of Redshank gathered at the water's edge and, again, plenty of Ringed Plovers.

Just the one Whimbrel and fewer Curlew to be soon.  Whilst pondering that though I heard the plainful cry of a departing Oystercatcher and soon found another.  The first of two Heron was resting near the far end of the Warsash to Hamble ferry landing strip and, at the same time, a Wood Pigeon took off from the path in front of me and a trio of Starling flew in to forage on the weeded shore.

Continuing on I soon found another Curlew followed by the first Little Egret of the morning.  A pair of Carrion Crows were scavenging on the beach to me left whilst on the wet meadow to the right  a couple of Herring Gulls resting near the many Black-headed Gulls.

Very little on the protected roosting /nesting area on the right other than a second Little Egret and a Redshank but up returning to the site less than ten minutes later as I made my way back a dozen Teal had arrive - but no juvenile Shelduck on this occasion.

Checking the area at the back of this stretch of wet meadow I found a single Lapwing and to the side of the channel both a half-dozen Jackdaw and couple of Carrion Crow.  All the outward species were recorded on the return walk along with another couple of Pied Wagtail.  In the trees at the back near the large houses a Collared Dove was calling and, finally, approaching the road and home a single Magpie. 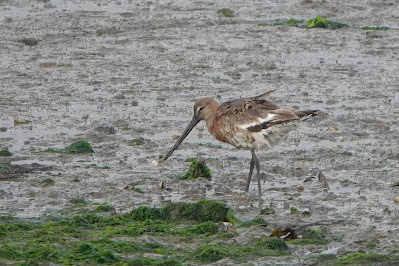 Posted by Bob Wright - The Axarquia Birder at 10:08