A most enjoyable day at Rutland Water with my birding friend, Chris Bell from Worksop.  Collecting Chris from Stamford railway station a few minutes after 8 we were checking out the fields adjacent to Burley Fishponds to the north of the site within half an hour and had soon recorded Rook, Carrion Crow, Jackdaw and Magpie along with both Greylag and Canada Geese.  I usually expect to find between two and four Egyptian Geese at Rutland Water but on this occasion we started with a flock of thirteen and probably ended recording as many as twenty on the day, including a good number of well-grown youngsters.  Naturally, we had already observed numerous Wood Pigeon along with a couple of Rock Doves (Feral Pigeon).  But checking the skies above the distant Egleton church we also noted a small number of Common Swift and even a handful of House Martin.

Next it was of towards said Egleton and the car park at the Visitors Centre.  But, a prolonged stop in the connected lane gave Chris an opportunity to put his excellent hearing to good use and we soon had at least three Yellowhammers in the immediate vicinity with one handsome male singing "full belt" from the tree top immediately in front of us. And, as they say, once you start on an aria you do not stop until you have finished no matter what the audience might be thinking or doing!

Both Blackbird and Pheasant then, having paid our entrance fee at the Visitors Centre, it was up to the first floor viewing gallery with our respective coffees to check out Lagoon 1.  Certainly no shortage of resting Cormorant, Mallard and a couple of Mute Swan.  Coots to the left and right and two Great White Egret along with a trio of Little Egret.

A short stop at the Redshank Hide overlooking Lagoon 2 produced the expected Sand Martins along with a pair of Barn Swallows plus a distant Marsh Harrier and the first Heron of the morning. Walking along the main path we stopped to listen to and then find both Chiffchaff and Willow Warbler closely followed by a Blackcap.  A handful of Goldfinch were working their way through the trees and a very vocal Wren introduced its presence.

Then it was straight on to Lagoon 4 with a first stop at the Dunlin Hide to check the massed gulls at the western end of the water.  Mainly Black-headed with a good number of distant Great Black-backed Gulls along with the visiting Common Terns.  Amongst the resting ducks a trio of Oystercatchers followed by noting the single Gadwall feeding next to a Mute Swan, a small flock of Wigeon, perhaps the first of the expected winter arrivals, and a couple of Shoveler.  Once back to the Sandpiper Hide we also found Teal and both Common and Green Sandpipers. Many Lapwings plus more Little and Greta White Egrets were also seen not to mention the many Greylag and Canada Geese.

A single Dunlin was found whilst spending much time considering the larger plover, was it a Grey or Golden Plover?  Unusual to see a single Golden Plover but after much discussion and checking with "Collins" etc concluded that it was indeed a (probable) female Grey Plover.  Then exiting the hide to move round to the Plover Hide, we checked out above to see what had put the Lapwing flock in the air and found the marauding Sparrowhawk. 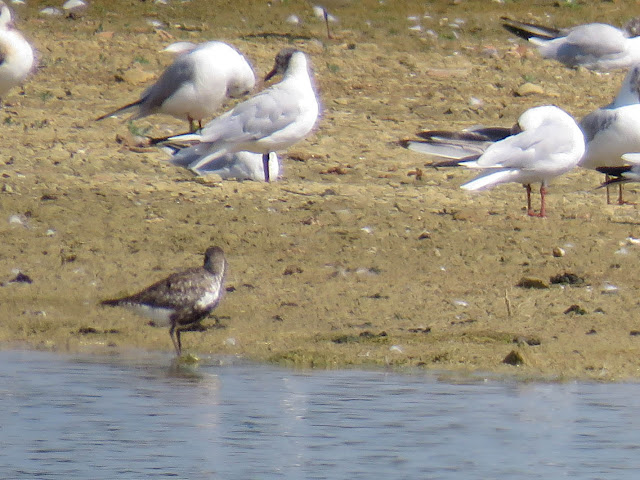 After visiting the Plover Hide to confirm the many Common Tern and Black-headed Gulls along with their respective young plus a family of Tufted Duck and, to the far end, a couple of Herring Gull in with the Great Black-backed Gulls, our final destination to the north of the reserve was the Shoveler Hide overlooking Lagoon 3.  Lots of Tufted Duck on the main water along with a couple of Shelduck and a few Great Crested Grebe.  However on the water in front of the nearby island, which held many Lapwing, Starlings, a couple of Black-tailed Godwit and the occasional Common Tern and Oystercatcher, a pair of Green Sandpiper working the edges and no less than four Great White and a similar number of Little Egret.  Still a little unsure about the juvenile Shelduck with its head stuck inside its wings as to whether or not it might even have been a (small) juvenile Egyptian Goose.

Returning to the Visitors centre to access the facilities and coffee machine we then proceeded southwards to the Harrier Hide overlooking South Arm III where we found a quartering Marsh Harrier, Herons and a couple of Reed Bunting. 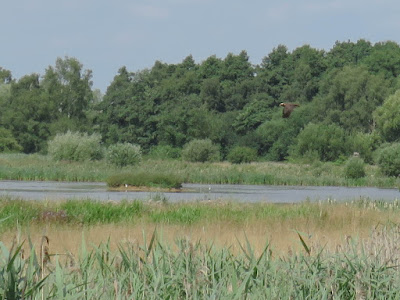 Next followed the longish walk south to Heron Hide overlooking Heron Bay where we duly found more Cormorant, Mallard, Little Grebe and, after help from the family already in residence, the lone Osprey resting on a distant pole beyond the trees.  Finally came the long walk back to the car park noting both Kestrel and Greenfinch on the way and the eventual return to Stamford via the Lyndon Centre and drive along the southern and eastern sides of Rutland Water.  As previously stated, a  most enjoyable day's birding with a final tally of 57 species.

A day in the life of a Common Tern Sterna hirundo 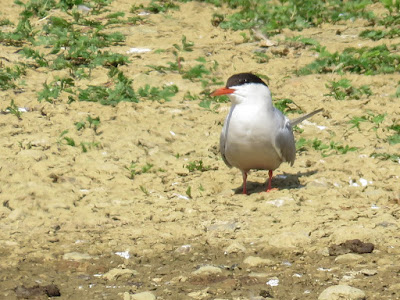 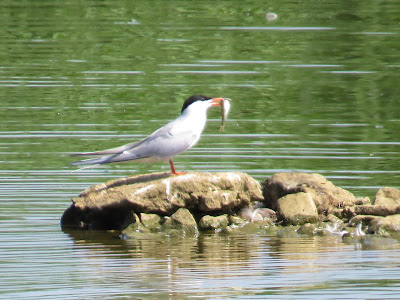 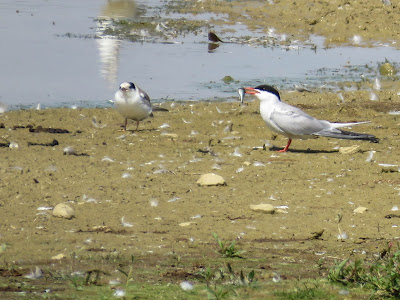 Check out the accompanying website at http://www.birdingaxarquia.weebly.com for the latest sightings, photographs and additional information
Posted by Bob Wright - The Axarquia Birder at 08:56