I may be back in the UK at the moment but, nevertheless, it was great to receive an emailed report from my friend Dave Elliott-Binns about his Atlantic pelagic trip last Saturday, this time using  the port at Chipiona in Cadiz province, along with friends Derek Etherton and Ricky Owen under the leadership of Javi Elloriaga of Birding the Strait. Given the recent winds it was wonderful that the trip actually managed to take place.

I left Arboleas on the Friday morning and stopped off at the Fuente de Piedra reserve.  Unfortunately there was very little water there and only saw about 30 Greater Flamingos in the distance.  I made my way to Chipiona and stayed overnight in the cheap hotel I had used last year when we went out from Rota.  This time the port was only 10 minutes away. Stupidly I misread the boarding instruction and waited at the wrong cafe!  I could see the boat on the other side of the harbour, so after a call from Javi, the organiser, I was only a few minutes late.  The bonus was that whilst I was waiting I saw at least 4 Little Swifts going to and from some nests under the roof of an open ended warehouse!
We left the harbour just after 8am and headed out into the Atlantic.  Javi said we'd be going out about 14 kilometres.  Birding was slow to start with.  We first saw a Gannet and the occasional Balearic Shearwater.  A low flying distant Great Skua was noted.
Javi, who was spotter at the front, observed a small raft of white birds which turned out to be Common Terns.  He then shouted that there was a huge plethora (not his word!) of gulls ahead and we'd investigate.  Sure enough there were Black-headed, Lesser Black-backs and Yellow-legged Gulls.  Amongst them were more Balearic and Cory's Shearwaters.
The odd Manx Shearwater was also seen.  We then had good views of some Great Shearwaters. 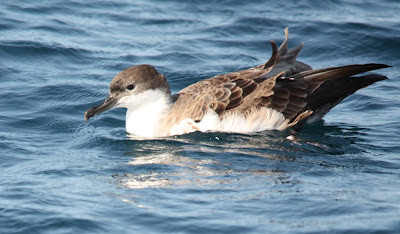 Javi was dropping "chum", popcorn & wotsit type snacks, off the back which attracted hoards of gulls plus some of the shearwaters.  A couple of Sooty Shearwaters came in quite close.  Two Great Skuas and an Arctic Skua skirted round the gulls chasing any with grub in its mouth.  An immature Gannet also came to investigate.  Our only Audouin's Gull of the day arrived and after various passes virtually took a sardine out of Javi's outstretched hand!
We headed back in, hot and exhausted...well, I was!  The last bird on the list was a Turnstone on the quayside.
The sea was choppy at times so please excuse the amount and quality of my photos!  A grand total of 15 species seen.  Still no petrels for me.  Maybe next time!
Regards, Dave
Check out the accompanying website at http://www.birdingaxarquia.weebly.com for the latest sightings, photographs and additional information
Posted by Bob Wright - The Axarquia Birder at 06:41