Was it because it was Friday the thirteenth that I arrived at RSPB Frampton Marsh reserve near Boston, Lincolnshire a few minutes before 6 o'clock this morning dressed in only shorts and a thin, lightweight, sleeveless  body warmer?  Whatever, there was no doubt about the cold coming off The Wash so just as well I also had a thin long-sleeved jumper in the car.  Dry and cloudy to start but at least it was calm until around 8 when the wind freshened and it turned into a real blustery day.  Nevertheless, I managed to get well over five hours on site and recorded some very special birds.

Driving to the site I managed to record all the local corvids except Jay and Raven and, on this occasion, manged 16 Magpie sightings before Spalding but then old one more before encountering the trio actually at the entrance to the reserve along with a Blackbird.  However, not a single Pheasant nor even a House Sparrow seen or during the rest of the day and old y a couple of Collared Doves compared with the scores of Wood Pigeon both on site and during the return journey from Stamford.  On the other hand, not that I can record it, I did come across a male Peacock strutting the verge outside Frampton church!

First of all to the high bank overlooking the Saltmarsh leading up to the Wash itself.  There appeared to be little water in the pools on the neighbouring wet grassland but once on top of the bank I had soon recorded Mallard, Shoveler, Teal and Shelduck.  Teal numbers were starting to increase from my previous visits but Lapwing numbers were still on the low side.  Plenty of Black-tailed Godwits along with Moorhen, Cormorant, Avocet and scores of Black-headed Gulls.

Looking over the saltmarsh I was unable to find the long-staying pair of Pacific Golden Plover but did find both a Kestrel and Short-eared Owl.  Given that a Sparrowhawk had passed over my head as I walked to towards the high bank it looked like be a promising raptor morning.  A single Whimbrel was seen and also at least a handful of Little Egret.  Meanwhile, on the reserve side of the bank, a Common Sandpiper was found followed by both Greenshank and Snipe.  Little Grebes were very active and overhead the first Sand Martin and a large flock of Starling plus a pair of Lesser Black-backed Gulls.  naturally, there were also a number of Mute Swans plus both Canada and Greylag Geese.

Taking the car back to the main car park so that I could check the main pools near the Visitors Centre and visit the neighbouring hides I soon added both a large charm of Goldfinches, another Snipe, Pied Wagtail and a couple of Coot.  At the moment just the single Dunlin and the first Ruff of the morning as I made my way to the Reedbed Hide.  Here more Black-tailed Godwits and Mute Swans were found along with a Green Sandpiper.  Towards the 360 Hide lots of Sand Martins in the air along with a few Barn Swallows and a large feeding flock of Linnet.  Even a couple of Common Tern flew over.  Once onside the hide itself more Avocets to be seen and then, looking towards the distant East Hide, a line of 19 Spoonbill and just to the right the long-staying, breeding plumage Cattle Egret.  In addition, whilst observing the Cattle Egret I noticed the huddled "bird shape" atop a short reed and realised, especially as it took to the air, that it was a male Peregrine Falcon.

Back to the Visitors Centre where it was now obvious that the high tide had pushed up the waders to take shelter on the reserve and I was greeted by hundreds of both Black-tailed Godwits, Dunlin and Red Knot, though the last were to be seen nearer the end of my stay during my final walk.  In addition, as well as many Ringed Plovers we also had a number of Little Ringed Plovers and a few more Ruff, Common Redshank plus a single Spotted Redshank and Little Stint.

Meeting a birder I had spoken when I first arrived, I was informed that the Pacific Golden Plover had been located so a walk back to the high banks and a hundred yards to the right finally revealed this long-staying visitors.  Not only the pair of Pacific Golden Plover but also a quartering Hobby. The possible icing on the cake might also have been the Sedge Warbler as I made my way back to the car.

My last walk was a complete clockwise walk from the Visitors Centre to the East Hide and returning via the 360 Hide.  The large hedgerow to the north of the site produced the first Chiffchaff and then on the first large water surface heading towards the sea the only Great Crested Grebe of the morning.  Nearing the hide I could see the very large flock of Red Knot which also included a small number of Dunlin, Lapwing and Black-tailed Godwit.

Whilst at the East Hide I had good views of both the Red Knot and the resting Spoonbill but the Cattle Egret had long since departed to the marsh itself.  On a neighbouring island a trio of Oystercatcher and immediately below the Spoonbill a quartet of Spotted Redshank.  Finally, on the distant edge of the water in the north-east corner a Gadwall. 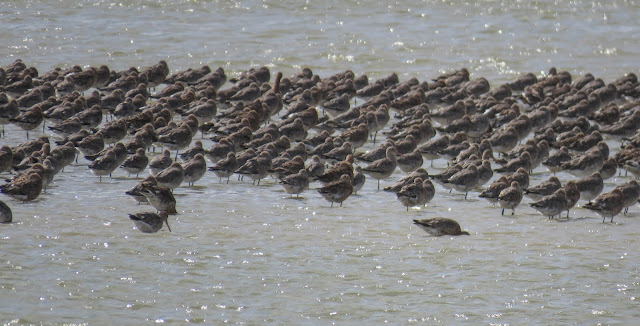 Check out the accompanying website at http://www.birdingaxarquia.weebly.com for the latest sightings, photographs and additional information
Posted by Bob Wright - The Axarquia Birder at 12:39