I had a wonderful report of a day's birding at RSPB Blacktop Sands from my birding pal, Chris Bell this evening.  Looking at his observations makes we ex-pats out here in the south of Spain realise the "common" birds that we no longer expect to see; think all those geese and duck species such as Goldeneye, Tufted Duck, etc.  Then, of course, how often to you see either/both Bullfinch and Dunnock (Hedge Accentor) on a regular basis never mind such rarities as Twite?  Time to sit back, read and enjoy some of those "missing" species and many thanks to Chris for providing a British perspective bird report.

Yesterday, for a change, I just about  got my clothing right for my birding outing.  Towards the end of the watching day gloves and hat made things for me more comfortable, but over-trousers and scarf were unnecessary luggage, but then their weigh is next to nothing.  Hope you enjoy this brief report of my enjoyable day, during which I met new people and some  "friends", some of whom I have not seen for a while.  Surprise was Paul Buxton, "Mr Attenborough" who I have never seen anywhere except there.  He directed me to a real Scaup at Attenborough last Wednesday which we failed to re-locate (no scope outing).

I made my way to RSPB Blacktoft Sands Saturday hoping that I might see Hen Harrier in the raptor roost.  It was encouraging news to find that a male and 2 ringtail had come in the previous evening.  I viewed from upstairs from 1st Hide which gives  uninterrupted views over the marshes and beyond the river Ouse and Trent and onto the  Humber from 4 to 5 PM .  It's a big area to view and hard work but whilst I saw at least 5 Marsh Harrier up together no sign of a Hen Harrier.   Had I made the wrong choice of observing hide?  Apparently not, as the report from the furthest east hide, Singleton, where they were up to 20 pairs of eyes, they had also not seen Hen Harrier.  I had heard Cetti's Warbler, Water Rail, and Bearded Reedling ,and also saw (and heard ) about 200 Pink-footed Geese flying south, so I think I made a good hide choice on this occasion.

My visit had started well as there were up to 100 distant Fieldfare in a field on my way to my usual starting point, the furthest west hide, Ousefleet, where fortunately there were only a handful of people (my visit had coincided with that of a bus full of birders from Rochdale).  Scanning the water which had many waders, some 200 meters away on the furthest side of a small island I picked up what looked like to me a couple of hunkered down Spotted Redshank, and whilst I set up my scope I alerted the other occupants of the hide to the possibility.  It wasn't long before one of the "Spotshank" woke up and extended its head enabling me to confirm my initial identification.   A year tick for me, and it was turn out to be my only one of my day.  The water held several hundred Lapwing, at least 70 Black-tailed Godwit, 20 Redshank , 20 Dunlin, Shelduck, with occasionally about 50 Curlew putting in an appearance but were mainly hidden in an adjacent reedbed.  Not a lot of other common wildfowl about which was generally going to be the theme of the day.

After my picnic lunch over an hour later, on my way to reception for coffee, I found a male and female Stonechat, and possibly a flock of 20 or so Twite. They never put in a better appearance than my initial observation, behaviour call diagnosis so I will be checking reports to see if they are seen better by others.

As I said earlier there was generally a low numbers and species of wildfowl about, and perhaps the best after my start were a few Snipe and a male and female Goldeneye, just over 50 species in total. The Spotshank nudged my year count to 119.

Many thanks Chris and as you say, good job Jenny returned to Spain today, Saturday, as the increasing winds and bead weather resulted in many flight cancellations on the following day. 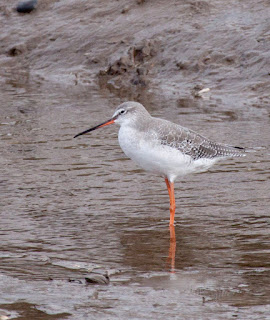 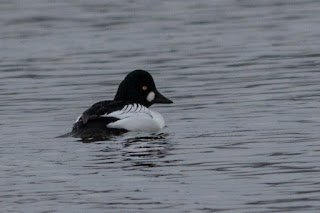 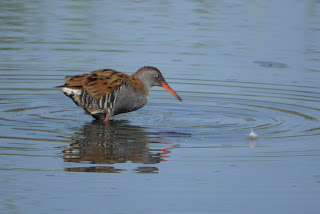 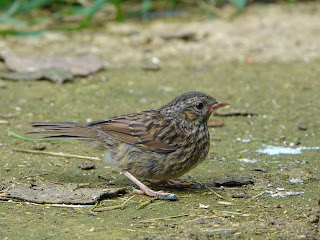 Check out the accompanying website at http://www.birdingaxarquia.weebly.com for the latest sightings, photographs and additional information
Posted by Bob Wright - The Axarquia Birder at 10:49