What a lovely day, brilliant sunshine and clear blue skies with almost no sign of a breeze, for a car tour of Granada province east of Loja.  Most enjoyable but the intent had been to try and find both Little Bustard and Black-bellied Sandgrouse!  Indeed, very few birds to see in terms of quantity but, nevertheless, a most enjoyable few hours and I did have lovely close views of both Little Owl and an Iberian Grey Shrike.

The "tour" started at 9.30 with a brief stop up at the old railway track at Ventas de Zafarraya.  Still a little mist above the high cliffs but , yet again, not a single Chough to be seen.  On the other hand, I had a couple of Blue Rock Thrushes and single Black Wheatear and Rock Bunting.  A number of Crag Matins were feeding near the old tunnel and caves and the walk along the track also produced Greenfinch, Serin and Great Tit.

Leaving the area I took the the main road up and through the "Magpie Woods" and on over to the arable fields and the old road up towards Salar.  naturally, I had many of the usuals such as House Sparrow, Collared Dove and Spotless Starling but also a very early sighting of a Red-legged Partridge and a good number of (Common) Magpies. A White Wagtail and many Corn Buntings before reaching the hill but the special sight was that of a resting Little Owl on the rocks where it had been seen on many precious occasions.


Apart from the occasional Barn Swallow and Goldfinch as I climbed the hill I had good views of the local Calandra Larks and once at the top also added Chaffinch, Wood Pigeon, both Thekla and Crested Lark and a single Mistle Thrush.  From here it was on to Salar to take the A92 motorway eastwards towards Huetor Tajar.

Arriving at the back of Huetor Tajar I forst walked the footpath through the growing fields encountering House Sparrow and Spotless Starling before my first Black Redstart.  A Greenfinch landed on the path in front of me and a handful of Tree Sparrows were making use of the dead tree.  Whilst a Meadow Pipit washed itself in the irrigation ditch then preened on the footpath, a male Serin came to visit.  The bushes to the left produced a small flock of Linnets and both Blackbird and Magpie were recorded by the time I reached the end next to the railway line fence.  With lots of activity in the fields around the town I was unable to locate any Little Bustards but did find White Wagtail, Chiffchaff and Goldfinches.


So on to the upper Cacin valley in search of the local  Black-bellied Sandgrouse flock.  Arriving on site I found a male Stonechat peched on the fence next to the two massive aviaries which still held between 20 and 30 raptors.  Difficult to be sure and although they appeared to be juvenile Gyr Falcon, I would think that there were also, potentially, both Lanner and Saker Falcons.  Indeed, it could be that these raptors, presumably being raised for the falconry trade, could even be hybrids. 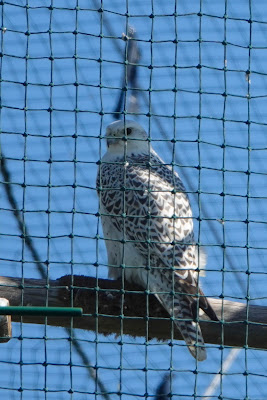 Again, no luck with the sandgrouse but a lovely view of an Iberian Grey Shrike.  A pair of Kestrels took off from the track just beyond the ruined building and during the rest of my drive through the immediate area found more Stonechats, Thekla and (mainly) Crested Larks along with Serin, Blackbird and a pair of Short-toed Larks then, as I made my way back to the new road to Alhama de Granada, a male Sardinian Warbler.


A last minute decision as I made my way to Alhama saw me deviate to the Bermejales Reservoir where I found plenty of after but not a single bird on same.  However, a walk around the picnic site produce Chaffinch, Wood Pigeon and both Blue and Long-tailed Tits.  Having come this far I carried on and reached the small laguneta above Alhama de Granada where I found a good number of Pochard plus Mallard, Little Grebe and Moorhen before continuing on back to the coast and home.  As previously stated, a most enjoyable tour of the area, just a shame about the lack of birds.