With the Odiel Marismas scheduled for Saturday I collected neighbouring Dutch birder, Lisette and we were away from Algarrobo Costa by 9 o'clock.  Having refueled both car and body we ready to start exploring the Osuna triangle by 11 and immediately had Barn Swallows followed by both House Sparrow and Spotless Starling before reaching the first turn on to the country lane alongside the active railway track.  No Stone Curlews on this occasion but soon had recorded Black Redstart, Whitethroat, Greenfinch and Stonechat.  Our first raptor was a resting Buzzard and ere long we had seen many plus the first Red Kite of the morning.  Similarly, no shortage of Red-legged Partridges or Spanish Sparrows


Continuing on along the country lane onwards the first high bridge over the abandoned high speed railway track we added both Marsh and Hen Harrier plus a couple of Buzzards before the first Kestrel of the morning. Smaller birds included Crested Lark, Stonechat, Corn Bunting and a pair of Calandra Larks.  A Sky Lark have an aerial display and then the first Iberian Grey Shrike with a pair resting close by.


From the top of the bridge we could view the surrounding fields and eventually found a total of 34 Great Bustards.  Nearby we also recorded Serin, Chiffchaff and a small party of Linnets.  Just when we thought we were not going to find any Black Kites we came across a kettle of over 80 slowly soaring on a thermal.  Before turning left at the upcoming junction we added a number of White Storks and a flock of Jackdaw.

Making our way back towards the A92 motorway we stopped to check out the distant Embalse del Charco Podrido.  Not just a good number of Flamingo but also Coot, Moorhen, Pochard and Black-headed Gulls.  And as we watched a lone Griffon Vulture drifted across the water.  In addition, it would appear that most the local White Storks were using the water as their preferred resting quarter.

Time to move o towards our final destination down at Punta Umbria just west of Huelva but first a stop at the Dehesa de Abajo to check out the lake.  Or that was the general idea until we got held up for an hour por more trying to navigate our way through the very heavy traffic using the motorway through Sevilla.  But we duly arrived and were rewarded in our now curtailed stay with a fabulous array of ducks and other species 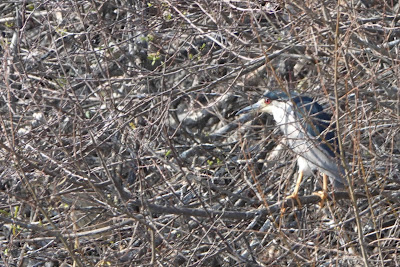 As might be expected scores of Little Egret and even more White Storks but first a short stop at one of the roadside pools where we were rewared by a colony of at least 60 Night Herons, a single Squacco Heron and a trio of Ferruginous Ducks on the water below.  On the fields opposite scores of Glossy Ibis and a number of Grey Heron along with a couple of Great White Egrets.


Back on the main laguna hundreds of Flamingos, White Storks and Coots towards the back along with a similar number of gulls, mainly Lesser Black-backed but also no shortage of Black-headed Gulls.  Apart from a number of Mallard and Gadwall there were very many Common and Red-crested Pochard and even more Shoveler.  Having found a few Teal near the first island I then watched a part of a dozen Marbled Teal work their way left and round to the back of the island.  Great!  On the open water both Little and Great Crested Grebe along with a few Moorhen.


Following the Cormorant that flew from the water over my head I then checked out both the verges and further fields on the other side of the road.  A very large distant flock of resting Spoonbill and even a Zitting Cisticola close at hand when I found the female Yellow-crowned Bishop and also added Sardinian Warbler whilst listening to the local Cetti's Warblers.  Finally I added Collared Dove as we departed the site and no sooner under way a couple of Azure-winged Magpies crossed the road and we were welcome at our apartment by a raucous Common Magpie. 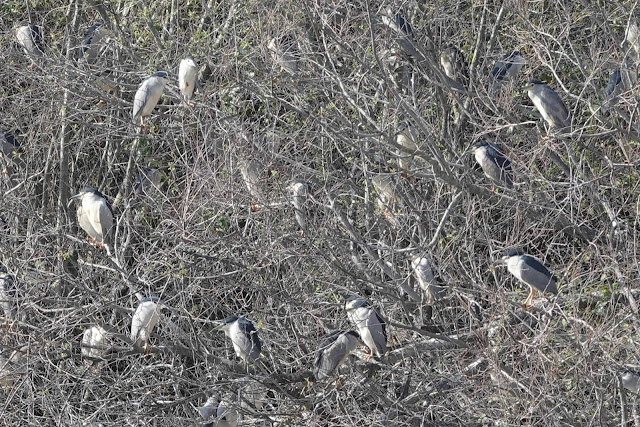 Check out the accompanying website at http://www.birdingaxarquia.weebly.com for the latest sightings, photographs and additional information
Posted by Bob Wright - The Axarquia Birder at 09:18