Beautiful early morning sunshine in clear blue skies and not a breath of wind as I left the coast at 7.25 with the temperature showing 12C and hot weather to follow.  However, ten minutes away from my meeting point with Derek and friends up at El Torcal whilst all outside seemed the same and the temperature had only dropped two degrees, the wind had picked up to gale force and the chill factor must have brought the real temperature down to between four and five centigrade.  My word was it cold and I can't remember the last time I wore three coats over my my long sleeve jumper!

Once suitably dress, along with Barbara and Derek Etherton who had brought Jerry and Barbara Laycock with them, we took stock of the bushes at the bottom of the entrance drive and large cliff face in front of us.  I had already seen the first Stonechat, White Wagtail and House Sparrows approaching the car park and no sooner parked up added Crested Lark. The bushes immediately above us seemed to be alive with small birds including Greenfinch, Serin, Linnet and Sardinian Warbler.  Checking the cliff face we soon added a resting Kestrel right at the top and then a pair of Chough eased their way from right to left which revealed the Crag Martins feeding in front of the lower rock face.  A "weird" call drew our attention to the two Red-legged Partridges that made the same flight as the Chough mentioned above.

Onwards and upwards to the half-way point to check out the bushes so favoured by warblers later in the year where we immediately found a number of Chaffinches and very many Blackcap busy feeding on the available berries.  A very brief appearance by a Wren, spotted by Derek, the a Thekla Lark which seemed to perched on a high rock for ages.  Meanwhile, the bushes were attracting both Robin and Sardinian Warbler and a little further up the road our first Song Thrush of the morning.  This area also produced both Blackbird and Spotless Starling before we recorded our first Blue Rock Thrush.

Arriving a the top we then explored the area beyond the car park where we found the bushes still contained a healthy supply of berries.  Whilst no Ring Ouzels were seen, we did see more Song Thrushes in an hour than we normally see in a full year.  Another Blackbird and Blue Rock Thrush and a couple of Black Redstarts before also recording both Great Tit and a couple of Rock Buntings.  With visitor numbers increasing time to leave and make our way down the mountain with a mid-way stop producing Black Wheatear, Black Redstart and Rock Bunting.  Once on lower ground and back on the main road we even had a resting Little Owl as we made our way towards Antequera.

Given that it was school half-term week and Fnete de Piedra full of visitors we decided to spend the rest of our time at the Laguna Dulce near Campillos.  Passing the hide we made a clockwise "figure of eight" around the lake with the middle loop taking in the now growing cereal fields.  Entering the track from the main road we immediately had a quartet of Cattle Egrets on the left and then not only  a couple of Crested Larks but also a single Calandra Lark. A few Barn Swallows were feeding over the fields and Collared Doves as we approached the from on the left.  Our first sight of the water on our right, and looking into the sun, confirmed Black-winged Stilt, Redshank, Lapwing, Snipe and a large number of Black-headed Gulls. A Greenshank took off to our left and whilst we were able to pick out a few distant Red-crested Pochard the closer view of the Marsh Harrier was more appealing. 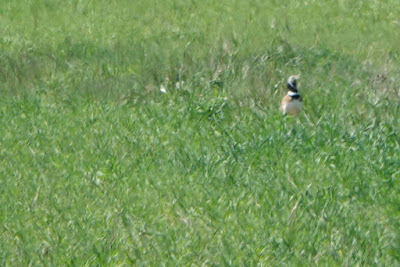 Continuing on we stopped to observe a Blue-headed Wagtail on top of a small stick and, crossing a drainage channel, I noticed the pair of Mallard.  Those in the front car saw the quintet of Cranes fly overhead and Stonechats were on display along with a single Corn Bunting before stopping near the ruined farm for our picnic where we watched a pair of Ravens up in the sky above the old buildings and both White Wagtail and Greenfinch near to the water's edge in front of us.  The loop through the fields was to prove most productive with Derek first to find the male and two female Little Bustards about 300 metres away to our right at he back of a field.  Great views albeit very distant for a decent photograph.  Working our way back to complete the visit to the rear of the water we also recorded Spotless Starling, House Sparrow, Serin, Red-legged Partridge and a very close Calandra Lark resting on the track immediately in front of us.

Once back at the hide we could certainly confirm the large number of both Black-headed and Lesser Black-backed Gulls but these were far surpassed by the hundreds of Coot including two very long, thin rafts; most strange.  Not just Black-necked Grebes in breeding plumage but also many Little Grebes.  Barbara E. found the sole Moorhen and their were scores of White-headed Ducks.  Once the scopes were in full action we also noted the many Common and even more Red-crested Pochards.  A handful of Gadwall but only the occasional Mallard and then Derek was able to get his scope on a very distant pair of Teal before they disappeared behind the reeds to the far left.  A pair of displaying Great Crested Grebes was seen on on the far side and at the very back to the right about a score of Flamingo and hiding in the reeds I managed to find our Purple Swamphen along with a Heron.


Just when we thought all had been discovered, including another sight of the quartering Marsh Harrier, a Hoopoe flew in front of the hide and in the bushes below we also recorded Chaffinch, Goldfinch and Barbara L. drew our attention to the three non-Coots away to the right in front of us.  Well done Barbara for finding the three Ferruginous Ducks.  What a way to finish a good day's birding in excellent company.

Check out the accompanying website at http://www.birdingaxarquia.weebly.com for the latest sightings, photographs and additional information
Posted by Bob Wright - The Axarquia Birder at 01:30