Dropped Jenny at the airport at 9 o'clock so was at Fuengirola by 9.30 to see if the Purple Sandpiper might have returned - it had not!  On the other hand, I was greeted by single Cormorant and Audouin's Gull then found a dozen Turnstones on the rocks below then a couple each of both Ringed and Kentish Plover.


On the grassy area behind the viewing shelter a good charm of Goldfinch plus a dozen Meadow Pipits, a male Black Redstart and a handful of Greenfinches.  Walking back to the car I then added a foraging Little Egret.


By 11.45 I was in the car park on the outskirts of Tarifa looking for the resident Common Bulbuls.  Pretty sure I heard one but, then again, they are so often mimicked by the local Spotless Starlings That I decided not to add to my list.  A Cetti's Warbler was calling from behind the tree and after a trio of Barn Swallows had passed overhead the visit of a male Kestrel.

Next stop round the corner to the Los Lances beach and its open hide overlooking the sands and what little water was exposed given that the tide was out.  Walking to the his I picked up Cattle Egret, Stonechat and a first Willow Warbler of the year.  A few White Wagtails and then, approaching the hide itself, the fifty plus Spotless Starling flock which also included at least three Common Starlings.  Immediately in front of the hide a handful of Sanderling along with a Common Sandpiper.

Away to my right a mixed flock of Black-headed and Lesser Black-backed Gulls along with more Ringed Plover and even a couple of Grey Plovers.  To my left, a lovely Caspian Tern plus a small number of Dunlin, more Sanderling and a Curlew Sandpiper.   A couple of Little Stint wandered by and then the small flock of Audouin's Gulls near the above Caspian Tern.  As I was preparing to leave a Green Sandpiper put in an appearance and then a small number of Chiffchaff as I walked back to the car.
Next stop La Janda.  A first Marsh harrier on my right as I approached the entrance with its newly-improved track don to the canal.  Stopping at the top to remove clothing and release the seat belt I suddenly had the arrival of Ricky and Sonia Owen behind me, on their way to hopefully find the wintering Lesser and Greater Spotted Eagles and just back from Bolonia where they found the adult Ruppell's Vulture mixing with the local Griffon Vulture flock.

Basically very quiet to start albeit I did record White Wagtails and Crested Larks.  Much nearer the river bridge before I found the much reduced-sized flocks of both White Stork and Crane.  Regular sightings of both Cattle and Little Egret and, eventually, the first of many Herons to be seen on site.  Another trio of Barn Swallows and then the start of regular appearances of Marsh Harriers including some most handsome males.  Jackdaws were in evidence and even a single Cormorant on the canal to my right.


Cetti's Warblers calling from the reeds below and soon the first Corn Bunting along with a largish number of House Sparrows.  A couple of Kestrels and as I cleared the avenue where the Cattle Egrets nest a distant trio of very high Griffon Vultures.  Off up towards the "smelly farm" and a trio of Pheasants plus a single Red-legged Partridge.  The occasional Wood Pigeon was seen atnd a the end of the road a couple of Purple Swamphen in the reeded pond to my right at the junction.

Taking a track down through the wet paddy fields to the end I found many mote Herons and Marsh Harriers and then a lovely male Hen Harrier.  A Snipe took off from the flooded field and then I noticed the small number of Lapwing.  Back to the smelly farm where I recorded a Buzzard and passed many Cattle Egret and Jackdaws plus more Marsh Harriers along with Stonechats and a small number of Spotless Starlings.

Next stop Barca de Vejer to check out the breeding cliff of the Bald Ibis and pleased to record that there was a total of six present for me to photograph.  What an ugly bird this is: but their mothers love them!  Also present a Cetti's Warbler, Blackbird and Collared Dove. 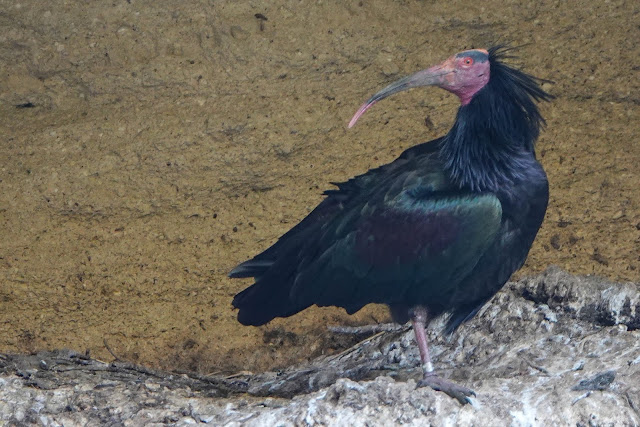 The final port of call for the day was the Marismas behind Barbate.  Lots of water but very few birds so some rigorous use of the bins and scope required which immediately produced White Wagtail, Crested Lark and Meadow Pipit plus lots of Goldfinches and Linnets in a mixed feeding flock.  On the water in front of me a good number of gulls, mainly Audouin's and Less Black-backed but also a few Yellow-legged and Black-headed Gulls. Just a couple of Black-winged Stilts and then a few Greenfinches flew into view.  On to the far end where I added a Redshank and on returning to my starting point not only found a couple of Kentish Plovers but also a least five Stone Curlews on the far island.  Checking the gull group again with the scope I was able to pick out both a single Sandwich Tern and Mediterranean Gull just moulting into its summer black cap.


A very pleasant day's birding in clear blue skies and very warm sunshine.  Now for a good night's sleep before starting all over again! 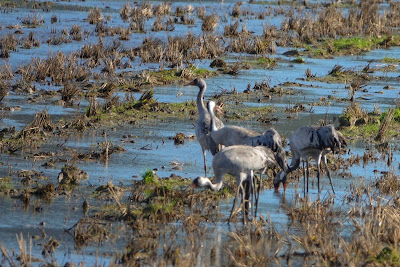 Check out the accompanying website at http://www.birdingaxarquia.weebly.com for the latest sightings, photographs and additional information
Posted by Bob Wright - The Axarquia Birder at 13:00