Not only John and Jenny Wainwright down at my local patch as they came across Mick Richardson.  Mick has also sent me a list of some of his birds seen during the morning and, yes, he too had a great view of the current visiting White Stork.  Great photos from Mick so, if you want to see a local White Stork you need to get down to the Rio Velez post haste.

I have attached a few shots taken down on the Rio Velez yesterday (Thursday).

During a couple of hours down on the river I saw 3 Bluethroats (2 males and a female), the White Stork, Zitting Cisticola, Penduline Tit x3, Red Avadavat, Common Scoter x7 and Black-necked Grebe on the sea and Northern Gannet, Great Cormorant, Mediterranean, Black-headed, Yellow-legged and Lesser Black-backed Gulls and Sandwich Terns all further out.

Off up to Sierra Morena tomorrow to try and see the Lynx, Spanish Imperial Eagle and both Griffon and Black Vultures. 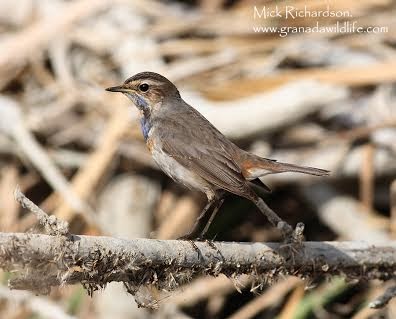 By jove, Mick, I'll look forward to hearing all about that visit.  Hope you get to see both vultures and eagles along with the Lynx.

Check out the accompanying website at http://www.birdingaxarquia.weebly.com for the latest sightings, photographs and additional information.
Posted by Bob Wright - The Axarquia Birder at 11:41