The Annual Finance Meeting of the Andalucía Bird Society at Fuente de Piedra this morning so Jenny and I left early enough to call in at the Laguna Dulce before arriving at the Visitors Centre to join other members of the Society.  Much rain overnight and quite cloudy as we set off.  As we travelled on the high road towards Casabermeja we had more light rain but could see signs of a break in the cloud which promised better weather to come - not that you would think that as we climbed up towards the cloud over Antequera.  However, once down on the plain the clouds broke up and, for the most part, the day became  not only dry but quite warm and pleasant with some lovely sunshine, providing you could keep out of the strong, cold breeze.

The journey over to Laguna Dulce produced numerous White Wagtails on just about every road plus the first charm of Goldfinches as I passed through Los Romanes. A couple of Rock Doves and the a Little Owl resting on the telephone wires half-way to the motorway.  Arriving at the water we were greeted by a handful of Moorhens scurrying across the lay-by to reach the shelter of the laguna along with more Goldfinches and even a few Chaffinches.

The water itself seemed to be in a state of recovery following the heavy overnight rains and whilst there must have been at least three hundred Coots present, the birds were huddled together in there distinct rafts on the open water.  Even the Lesser Black-backed Gulls seemed to be solace from each other and there were certainly very few ducks about.  Mallards were in a group on the far left along with a small number of Pochards, which left both the Little and Black-necked Grebes very exposed and easy to find.  Scoping the edges produced an exposed Purple Swamphen on the far left and then a good number of Black-winged Stilts trying to feed in whatever shelter they could find.

Meanwhile we did find raptors including a hovering Kestrel and a couple of Marsh Harriers.  However, the distinctive "honking" from behind the hide had us both up and out in the open to see a fly-past of about seventy Common Cranes.  Whilst these birds seemed to be heading for Fuente de Piedra we did, nevertheless, find a large group of about one hundred and sixty grazing on the far, green, field to the right of the ruined far.  Meanwhile, immediately in front of the hide, the occasional sight of a scavenging Chiffchaff.

Then it was off, via the back road, to Fuente de Piedra passing good numbers of both House Sparrows and Spotless Starlings on the way along with the odd Collared Dove and, of course, more White Wagtails.  A Hoopoe entertained us as we passed the back of the laguna and a couple of Stonechats were also recorded.  Arriving at the reserve, it was good to see that there was now a plentiful supply of fresh water both on the approach field to the left and under the wooden causeway to the right - but no Avocets on site as yet.

From the Visitors Centre we could see that the Flamingos were well-spread over the water but numbers, to me, seemed less than I had expected given the proximity of the coming breeding season.  Lots of Lapwings and Black-winged Stilts on the nearer edge of the main water and a t least one Shelduck recorded.  Coots and Moorhens had returned the no refilled scrape below along with both Mallard and Teal. A single Snipe and a lone Green Sandpiper wee found near the reeds at the back of this water.

A walk to the hide overlooking the laguneta at the back produced more of the same but mainly Shoveler and Pochard by way of ducks.  On the other hand, I did pick up a pair of Gadwall.  Black-headed Gulls were about along with dozens of feeding Chiffchaff.  Also nearby, both a Stonechat and a Black Redstart.

Walking back along the water's edge towards the wooden walkway we also recorded a trio of Meadow Pipits on the edge of the scrape.  Then, as we approached the wooden bridge, a single Barn Swallow flew past immediately in front of us, the first seen this year.  All that was found on the far side was a long-hovering Kestrel that eventually dropped on his victim - but came away empty-handed, or should I say "empty footed?"

Then it was time for the Society's meeting at the Visitors Centre and, on completion, Jenny and I undertook an anti-clockwise tour of the main laguna, stopping first at the Mirador de la Vicaria which, as so often is the case with this particular site, nothing was seen.  Approaching the Mirador de Cantarranas we had a Great Tit in the olives and then our first view of the wintering Cranes at his sight with a small number over-flying the car away from the water.  Stopping, we were able to find at least fifty in the distant fields.  From the Mirador itself we could see at least another hundred or more feeding Cranes but very few birds on the water.  Those that were there were very silhouetted and difficult to identify - apart from the Black-winged Stilt and a couple of Flamingos which had moved in from the adjoining main water where thousands could be seen.  At least two Marsh Harriers were recorded and then, amongst the feeding Crag Martins below, a few House Martins and Barn Swallows. 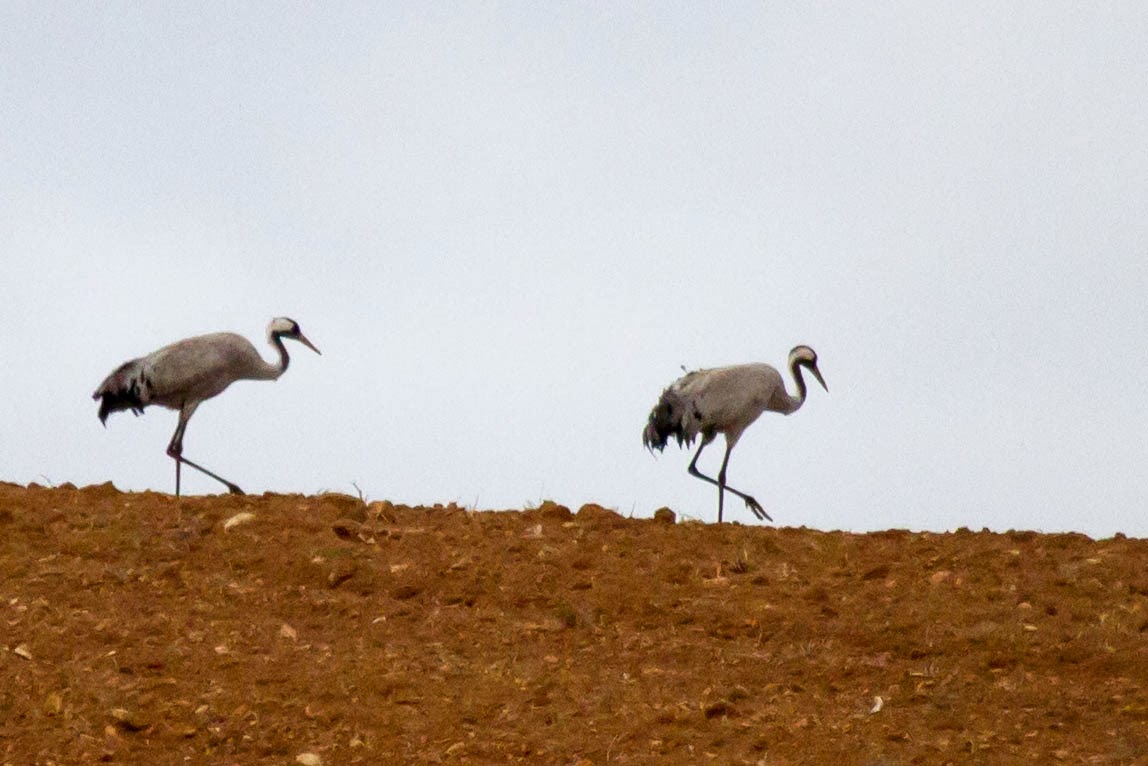 The final loop round the water and back to Fuente de Piedra did not produced the expected large flock of roosting Stone Curlews, just a pair that were working their way along the back edge of the field on the left having, along with the main group, probably been disturbed by the passing walkers who had their small dogs with them.  The village itself duly turned up more Spotless Starlings and a Jackdaw and, with cloud once more returning, we made our way back home.  Only 41 species recorded but at lest the total included five near species for the year so the 2014 total has now reached 96 and still a few days left to reach the "ton" before the end of January!

Posted by Bob Wright - The Axarquia Birder at 04:17