My only ever sighting of a Moustached Warbler in Spain was about four years ago at the El Honda reserve near Elche, just inland from Alicante.  So having had a bird discovered at the relatively local site of Charca de Suarez on the western outskirts of Motril by Steve Powell a couple of weeks ago and then re-sighted the following week-end, I decided that today would be my only chance to see for myself, if the bird was still present, before disappearing down to New Zealand at the end of the month.  Pleasant start to the day here with a little hazy sunshine and uneven cloud cover so away before nine but had to call in at the tyre-shop to have all tyres checked as none of the local garages seemed to have a reliable airline and, I suspected, I had at least one slow puncture on the car.  All completed and on our way so that Jenny and I arrived at the sight be about 10.30.

As usual we drove down "Turtle Dove Alley" into the "Motril Marshes" at the back of the site but all seem relatively quiet with very little to be seen apart from Black Redstart and Stonechats and a small number of Cattle Egrets.  Whilst I checked out the marshes Jenny, on her side of the car, saw her first ever Bluethroat drop in and disappear into the long grass.  A couple of Blackbirds were hanging around near the site's entrance and then we made our way down to the Laguna del Taraje.  A small number of Coots along with a pair of both Mallard and Shoveler on the water but the dominant species was the score or more of Chiffchaffs that flitting about in a feeding frenzy.  The that tell-tail white backside and the dull blue glow in the reeds and we had found our first of three Purple Swamphens of the morning.  A few Moorhens appeared along with a single Little Grebe followed by the first of many White Wagtails.  At this point I returned to the car as I had forgotten to pick up a spare battery for the camera and, whilst away, Jenny enjoyed the arrival of a Grey Wagtail and a Marsh Harrier flew over the water away from the main laguna.  For my part, I got to see an over-flying Heron and the only Robin of the day.

The walk round to the main hide overlooking the Laguna de las Aneas produced a resting Kestrel followed by very many more Chiffchaffs and, on arriving to have sole use of the hide, the first thing we saw was yet more Chiffchaffs.  On the water many Yellow-legged and Black-headed Gulls along with a good number of Coots, Moorhens, Mallards and Shovelers.  A handful of Pochards were at the back of the water along with half-a-dozen Grey Herons and a handful of Cormorants.  In addition to the Little Grebes, a single Black-necked Grebe was feeding to the rear and then yet another Purple Swamphen to the right.  The occasional and regular White Wagtail put in an appearance but no other small birds save for a single Black Redstart.  In addition to the Mallards, a small number of Cattle Egrets were resting on the small island in front of the hide.

Time to head off to the next hide at the Laguna del Trebol in search of the target bird for the day, the Moustached Warbler.  Arriving we could not but notice the large number of Crag Martins feeding high overhead.   Again, scores of Chiffchaffs all over the place along with Coots, Mallards, Moorhens and Little Grebes on the water.  A pair of Teal were seen at the back and more White wagtails came in to feed.  Immediately in front of the hide a couple of juvenile gulls wandered around as if frightened to enter either the water or sky and the binoculars were constantly focused on the reeds immediately opposite the small channel leading off to the left.  This did in fact produce a Stonechat and a couple of good sightings of Cetti's Warbler but not the bird we wanted.  More concentrated scoping to the far left found one and then another couple of the introduced Red-knobbed Coots and, at about this point Jenny moved on towards the final hide and the car. 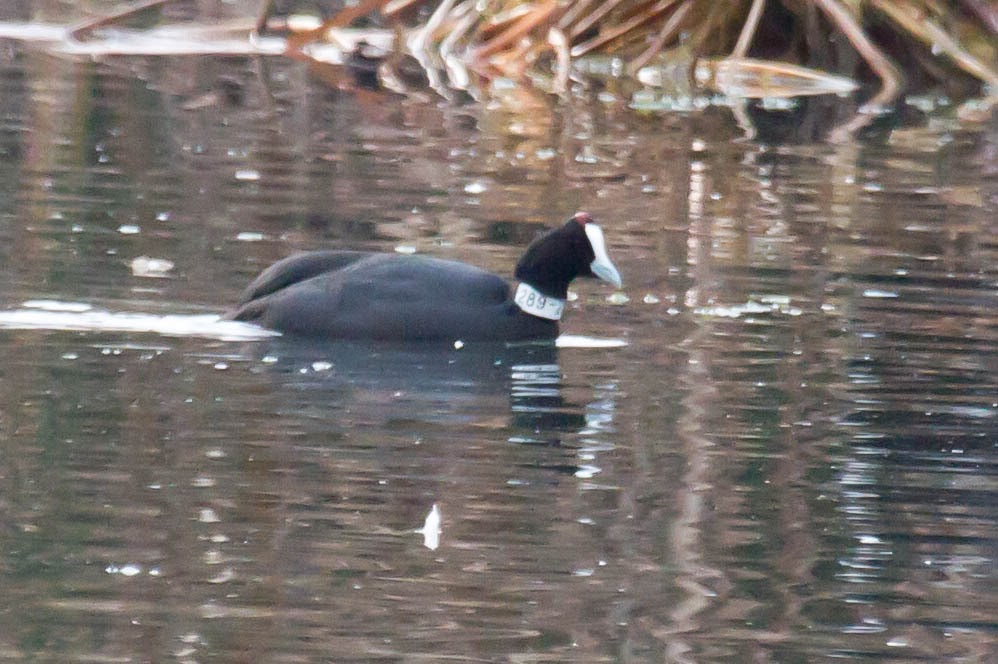 To stay or not to stay, that was the question.  A slight movement behind me and I had been joined in the hide by a local birder from Almuneca, Hamish Nicol.  He obviously brought good luck with him and was able to return a favour.  No sooner had I told him about the bird I was trying to find and also the presence of the Red-knobbed Coots, which he was then able to observe, than I retuned to looking closely once again at the opposite reed bed. And there it was, the most fleeting of sights as he Moustached Warbler emerged from the reed almost at water level for all of two seconds.  However, the bird had not been seen by Hamish so explaining where in the reeds it had appeared we both looked again and, sure enough, another brief visit which meant that we both got good, but very brief, sighting.  Unfortunately the bird had disappeared before I could get the camera on it but a Moustached Warbler had now been added to the 2014 sightings in Spain.

Time to leave after the most fleeting visit to the Laguna del Lirio where we found another Little Grebe as Manu was waiting to lock up the gates.  From her we drove up to Velez de Benaudalla, passing many Cattle Egrets and a Sardinian Warbler on the way, to see if the Dipper might be at the local picnic sight on the Rio Guadaleo.  A Grey Wagtail, House Sparrow and Chaffinches but no Dipper.  The traditional nest site looked very inviting so, perhaps, we were too early and a visit in March will be necessary.  Finally, a Common Sandpiper at the water control followed by more Cattle Egrets as we drove back to the N340 and home.  Not a bad morning with a final total of 35 species including eight new species for the year to take the running total up to 80.

Check out the accompanying website at http://www.birdingaxarquia.weebly.com for the latest sightings, photographs and additional information.
Posted by Bob Wright - The Axarquia Birder at 04:09