I needed to refuel the car so any excuse to get in a little more birding.  In this case, ninety minutes down at the Rio Velez in Torre del Mar where I was welcomed under the bridge and on to the track by the usual Rock Doves and Moorhens plus a new car park.   Somebody has been really busy and found some money somewhere in order to plane a number of saplings at the start of the track down to the beach and, at the same time, creating a "proper" car parking space.  I am not sure whether or not this was intended for we birders in the Axarquia or the farmers working opposite!  Alas, I suspect the latter.  Even better, I had already encountered the resident Thekla Larks and a Black Redstart as I drove down the mountain.

Once I took a closer look I could see that the water levels were now well down but here were plenty of Chiffchaffs to be seen everywhere and then both a Grey Heron and a Little Egret flew past.  So, off towards the pump house where I immediately came across ten Mallards and ere long a flock of two dozen Sanderlings with a single Common Sandpiper for company.  Feeding in and around the area were the first of very many White Wagtails but also a Robin skulking in the undergrowth and lower tree branches in front of me.  Clearing the short stretch of trees I could see that the Coots had returned in force and a number of Yellow-legged Gulls were in the air.  Another Little Egret and Heron plus the first of a few Ringed Plovers.  Within minutes I had also found a feeding Little Ringed Plover. 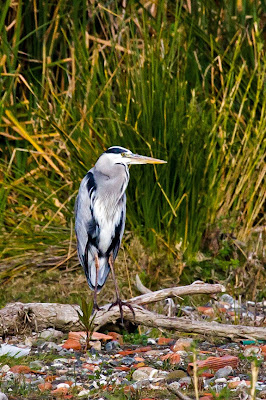 Reaching the pump house I then discovered the latest addition to our local "reserve" with the newly-built hide immediately opposite.  And wonder of wonders, the builders either used a non-Spaniard, certainly not a child this time, as the seats line up with the windows and , unlike so many hides out here in Spain, you do not need to fold you back in two to be able to look out at the habitat in front of you!  This also probably explains all the beach excavations earlier in the year as the "reserve" now would appear to have a permanent lagoon set back from the beach which could develop very nicely - if left alone and allowed to settle without any human interference.  Naturally, I tried out the hide - and also on the return walk.  I was able to look out meadows in front and two small, parallel stream jut beyond which revealed both Coots and Moorhens!  Chiffchaffs were feeding all around me and lots of White Wagtails on the grass but also a handful of Meadow Pipits.  A Robin put in an appearance followed by a score of Spotless Starlings that came down to drink and bathe.  But a closer look revealed that there was also a Common Starling in with his southerly cousins so this hide is OK by me!  I could even see to the northern end of the lagoon and the resting gulls which were mainly Black-headed with a number of Yellow-legged Gulls.  A scope from here is going to be very useful but the temptation will be to drive straight to the hide and miss out the river stretch.  Opposite the hide a cycle rack to hold up to eight bicycles has also been created from wood and the new information board is erected and awaiting its message.  All looking very good and something for which the town can take pride.

Continuing on I had a number of raucous Monk Parakeets pass over followed by a handful of Blackbirds in and out of the bushes and reeds.  To my right there were feeding Goldfinches and Serins on the meadow and then I was on the beach.  Quite a number of gulls resting on the sea but with no scope and sun in my face there was no point in trying to make any sensible identification.  However, looking inland towards the reeds at the back of the first small pool and I did pick up a solitary Bluethroat plus more very active Chiffchaffs.  Strange as it may seem, this was also the only place where I recorded House Sparrows.

The walk back to the car did reveal one or two additions; first a single Grey Wagtail and a winter plumage Dunlin had dropped in to join the feeding Sanderlings.  The same male Stonechat was sunning himself and the Meadow Pipits were freely moving about.  At last a couple of both Cattle Egret and Crested Larks with the last bird of the morning at the river being a Collared Dove that decided to take a rest on the path immediately in front of the car as I started the engine.

So back up the mountain, where I encountered the usual small flock of Chaffinches, in time for a well-earned cup of coffee having recorded a total of 33 species for the morning. 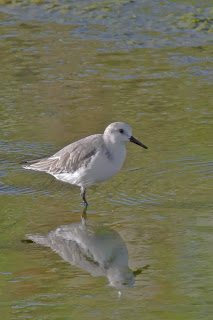 Check out the accompanying website at http://www.birdingaxarquia.weebly.com for the latest sightings, photographs and additional information.
Posted by Bob Wright - The Axarquia Birder at 07:49