Jenny feeling a lot better so decided I would actually make the journey down to the Brazo del Este in south-west Sevilla Province.  No point driving straight past Fuente de Piedra so first to the Laguna Dulce, then Fuente and, finally, arrived in Los Palacios y Villafranca just after 4pm.. Too late to do justice to the Bazo site so overnight in a basic hostal in readiness for an early morning start on the Saturday.  With tickets for the monthly dance that evening, it was a case of straight home afterwards rather than a repeat visit to the Osuna area for a second chance to check out the Great Bustards.
Leaving home just after 8am the weather looked set fair with just the odd, scattered cloud in the sky but quite a strong breeze.  Thekla Larks and Goldfinches on the way down the mountain and House Sparrows, White Wagtails and Blackbirds as I passed through Los Romanes.  Then, once off the motorway and onto the Campillos road the first Spotless Starlings, Rock Doves and even a Southern Grey Shrike.  Then, arriving at Laguna Dulce, a very sleepy Buzzard resting atop one of the disused wooden electricity poles (and still there when I drove back over an hour later) and a number of Cattle Egrets in the neighbouring fields.  The water was calm and, once again, full with hundreds of Coots to be seen.  Plenty of Mallards and Shovelers about and scoping the laguna I was able to record Pochard, Gadwall and at least 150+ White-headed Ducks.  Not so many grebes, or so it seemed, but more concentration revealed all three resident species with mainly Little and Black-necked but also a few Great Crested Grebes.  A few Lesser Black-backed Gulls and three Purple Swamphens seen along with a few Moorhen.  A Stonechat popped up in front of the hide but it was the four Marsh Harriers that captured my attention.

Next the short drive round to Fuente de Piedra with a couple of Kestrels hovering as I covered that horrible road towards the Mirador de Cantarranas.  Yes, the Cranes were back with a flock of towards 200 resting to the left of the large pool between land and the main laguna.  It certainly seemed from their behaviour that these were probably newly-arrived birds.  Just a single Black-winged Stilt to be seen. The Visitors Centre proved more active with, surprise -surprise, water in the laguneta at the back.  Here, mainly Shovelers but also Teal along with more Coots and a couple of juvenile Flamingos.  Chiffchaffs fed in the small path-side bushes and there were scores of Jackdaws about, the largest flock totalling over fifty individuals.  Flamingos, on the main water, could still be countered in their thousands but were now well dispersed over the water.  A pair of Shelduck were recorded along with a handful of Lapwings.  However, the field containing the newly-repaired electricity tower held more along with the above Jackdaw flock and, with careful study, I was able to pick out some of the resting Stone Curlews.

Travelling westwards via Osuna, I hoped to find a few of the local Great Bustards but, on this occasion, I was to be unsuccessful.  However, I did have a number of Serins and Crested Larks along with many Marsh Harriers.  Stopping at the first new railway bridge I put up a Red-legged Partridge and the resting Spotless Starlings included a couple of Common Starlings.  Looking over the trees I was able to pick out the first Red Kite of the day.  Driving back to the road I had my only Little Owl; unfortunately it was on the road as a fresh-dead specimen, presumably hit by a car earlier in the morning.  Getting back into the car I looked up as a pair of Ravens passed overhead.  Breakfast?  Collared Doves and a Hoopoe were also recorded but the best sights were those of the three Black-winged Kites that I came across.  In addition to Kestrels I also found a pair of Peregrine Falcons.  Stopping to take a photograph of the remaining female, looking at the result I discovered that I had also managed to included a resting Black-winged Kite immediately above the Peregrine. 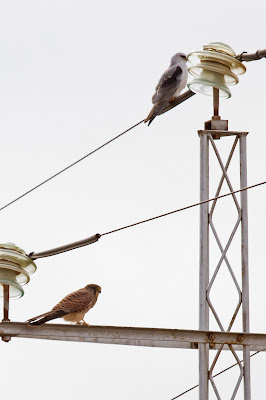 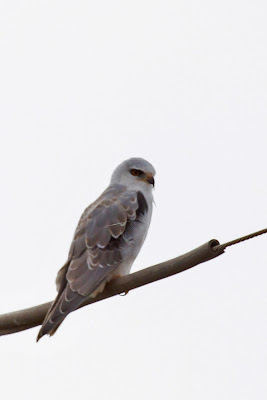 Juvenile Black-winged Kite Elanus caeruleus and then two raptors for the price of one!

Having booked into the hostal in Los Palacios y Villafranca, I took the short drive over to Los Chapetales to both make sure that I knew which road to take in the morning and check the site conditions.  The rice had been mainly combined leaving large watery expanses which held many White Storks, Herons and Little Egrets and I even had a Squacco Heron welcome me on the bend as I crossed the channel.  Meanwhile, a start had been made on harvesting the local cotton crop. 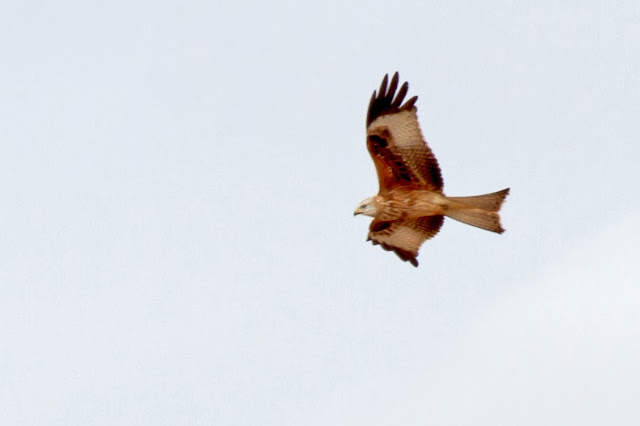 ﻿ Saturday morning and not a cloud in the breathless sky with the sun in readiness to create some real warmth. Coffee out of the way I was past Pinzon ready to enter the Brazo del Este site near the rice depot.  The usual Spotless Starlings, Collared Doves and House Sparrows out of the way I was soon amongst the hundreds of White Storks feeding on the former rice fields - but not before awakening the sleepy Booted Eagle on an electricity pole just before leaving the road.  But then a single, unexpected Black Stork to give me real cheer for the morning.  As the morning warmed, more and more Marsh Harriers seemed to take to the sky but, I have to admit, no one adult male in its full glory was seen all morning. 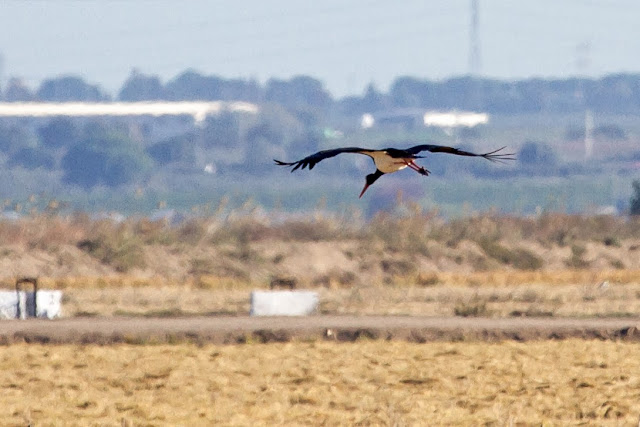 In addition to the White Storks there were numerous Yellow-legged and Black-headed Gulls and, further along, even Lesser Black-backed Gulls.  Again, no shortage of Grey Herons and scores of Little Egrets.  On the drier land, Cattle Egrets had come to feed and the first open water produced a score or more of Cormorants.  No shortage of Coots and the occasional Moorhen but ducks consisted of a few Mallards.

After the first Purple Swamphen I seem to be seeing them on every pond .  Only one water contained Little Grebes and then the first Spoonbill on the river.  A small number of Green Sandpipers was seen along with a handful of White Wagtails.  Two nearby Squacco Herons were a join to behold.  The return journey produced a fly past of formation Spoonbill which rather took me by surprise and they were mainly passed before I could get a decent photograph.  The track-side bushes contained a few feeding Chiffchaff but the overwhelming passerine was the Spanish Sparrow.  There must have been well in excess of a thousand or more in a number of sizable flocks. 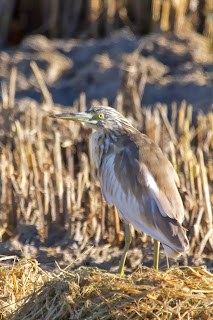 No Night Herons and the Black-headed Weavers had departed leaving their nesting trees to be occupied by a flock of over fifty Spanish Sparrows.  Returning to my starting point to take a last look at some of the more productive pools, I continued to find more and more Purple Swamphens and a flock of 150 tightly-packed Black-winged Stilts.  The Marsh Harriers continued to quarter the site and a single Kingfisher flashed past.  The return journey back to Los Palacios was by a different route and jut after the rice depot I came across a small party of Meadow Pipits feeding on some grassy wasteland.  Then I was able to add more Lapwings and another pair of Black Storks.  Not too sure about the small flock of Greylag Geese.


FOOTNOTE:
It would appear that I was wrong when I said that the Black-headed Weaver colony had been abandoned.  Looking a little close at my photographs I can now see why one of the Spanish Sparrows looks larger with a greenish tint.  Yes, you guessed correctly, a female (or maybe juvenile) Black-headed Weaver.


Check out the accompanying website at http://www.birdingaxarquia.weebly.com for the latest sightings, photographs and additional information.
Posted by Bob Wright - The Axarquia Birder at 12:19