I met up with my friend Micha Fager from Finland outside the Guadalmar church at 9.30 so that we could spend the morning in the Guadlahorce Reserve, Malaga.  A beautiful clear and sunny morning with no breeze which certainly got hotter and hotter as the morning progressed.  And what a morning it was, too, with Spoonbill, Little Bittern and Penduline Tit.  By the time we got back to our cards and departed from the church we had recorded 49 species; not a lot of anything but a steady trickle of most of the expected birds about at the moment.  Sadly, the only raptor we saw was  Kestrel with at least a quartet being observed during our stay.  Similarly, waders were thin on the ground although on count back I see that we actually recorded eight species.

House Sparrow and Collared Dove were noted as we approached the entrance and the resident Rock Doves were in their usual place below the road bridge, despite the works going on above their heads.  The first Cormorants flew into the site and, already, we could see that a number had taken up their roosting perches at the back of the main water.  There were a couple of Coots on the river and many more on the ponds themselves, but not in the numbers to be seen at Laguna Dulce, along with a number of Sardinian Warblers working the edges to the paths as they flitted from bush to bush.  The first Stonechat put in an appearance followed by a male Black Redstart and then we were at the Lugana Casillas.  Very quiet with just a handful of Coots and a quartet of Little Grebes.  Overhead, a number of very high Crag Martins were observed.  Two Mallards were located and then a very brief view of a Little Bittern as if flew five metres across the top of the opposite reed fringe and rapidly disappeared within.  Thank goodness, albeit not known at the time, we were to get another, better, view later on.

The Wader Pool produced a handful of Black-winged Stilts and about a dozen small plovers, mainly juvenile Little Ringed but also a few Ringed Plovers.  A single Greenshank was working the waters and then a lone Common Sandpiper was found.  Meanwhile, a half-dozen Snipe had their long beaks in the water and mud as they sort out tasty morsel for breakfast.  Not only had we recorded our first Grey Heron for the morning as it flew over and then alighted at the far end but also a trio of Little Egrets.  The main duck here was Teal of which there were about a dozen.  A Greenfinch was moving about the trees along with a number of Chiffchaff and the first of the Serins and Goldfinches to be seen.  We were joined in the hide by Micky Smith for a short while and, whilst with us, a single Spoonbill dropped in for a visit and remained the whole time including our return call on the way back from the sea; a visit that also resulted in finding a Green Sandpiper.  Finally, jut as we were about to leave, a single Lapwing landed a the far end of the water. 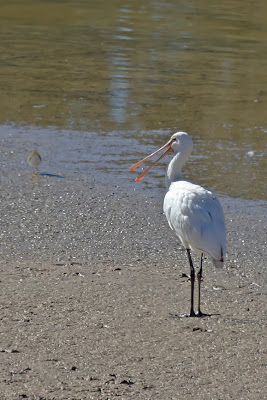 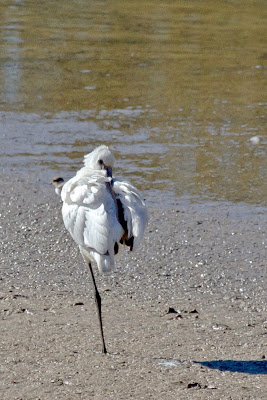 Very little on the old river, the Rio Viejo, just the three juvenile Flamingos and another Little Egret.  The eastern canal behind us held a number of sheltering gulls including Yellow-legged, Black-headed and a couple of Mediterranean Gulls.  Closer inspection when we reached the Sea Watch revealed that this little group also included a handful of Mallards and two pairs of Gadwall.  Out at sea a few more gulls were resting on the calm waters and these were mainly Lesser Black-backed with more Black-headed Gulls.  A single Great Crested Grebe was near their company and two adult Gannets flew over at a fair distance from the shore.

Eventually reaching the Laguna Escondida we were greeted by a score or more Little Grebes.  We shall have to rename this water if this happens every time I come here!  Only one, female, White-headed Duck but a few more Shovelers and a couple of Mallards.  More Coots and the occasional Moorhen but then the reappearance of our, assuming it was the same bird, Little Bittern.  It posed for a while on the edge albeit mostly masked by the reeds themselves.  Just to add to the fun and excitement, a male Penduline Tit flew across the water form right left  but I then proceeded to find the female.  Both eventually returned from whence they had come.  Finally, two appearances for the Kingfisher that flashed across the water before we set off.

As was expected, the Laguna Grande held the main colony of Cormorants along with a number of Grey Herons.  Gulls were represented by Black-headed and Yellow-legged Gulls and we managed to find three Black-necked Grebes.  A single Flamingo fed in the centre of the laguna whilst a quartet of Lapwing could be seen at the far end.  A White Wagtail put in the occasional appearance and there were still Coots and Moorhens to be seen.  Chiffchaffs fed in the bushes and raucous Monk Parakeets flew about overhead.  We had e seen our first Zitting Cisticola whilst walking between the last two lagunas and now we were to also record a single Robin as we set off for the footbridge.

Check out the accompanying website at http://www.birdingaxarquia.weebly.com for the latest sightings, photographs and additional information.
Posted by Bob Wright - The Axarquia Birder at 10:15