What a privilege; absolutely spondiforous!

Late afternoon on the Rio Guadalfeo, well above Salobreña, and the sun was streaming down from a clear blue sky to give a lovely warm feel to the day.  But amongst the trees on the western bank of the river I was not only sheltered from the sun’s rays and the strong breeze but also had the sun behind me reflecting on both the water and far bank.

Above the water lots of low-flying Barn Swallows and House Martins feeding as if there would be no tomorrow and whilst the latter had a brown look about them, the iridescence of the Barn Swallows backs gave the impression that the river had been inundated with a plague of Kingfishers.  On the far bank, less than fifteen metres away, a number of both Grey and White Wagtails feeding on the edges and shallow mid-stream banks.  Above me the constant calling of Chaffinches and Golden Orioles whilst, the longer I stayed enjoying this avian wonderland, I was able to pick up not just the resident House Sparrows and Collared Doves but singing Blackbirds, calling Cetti’s Warbler and a rather lovely Nightingale.  Before leaving, I even had a pair of Spotted Flycatchers also make use if the neighbouring bamboos for a quick insect forage and there were Goldfinches to be seen in the neighbouring trees and bushes. 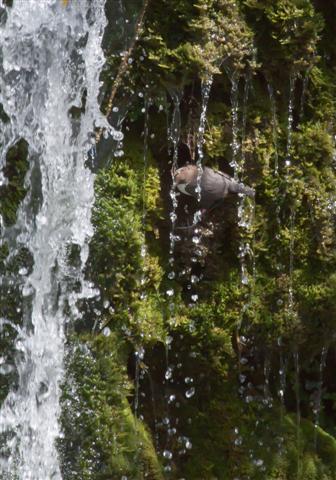 But all this paled into insignificance as I found the Dipper’s nest in some slimy green growth nest to a torrent of local water emptying into the river.  First the Dipper would arrive from downstream and rest on a cane below the bamboo screed opposite me.  After, usually, less than a minute whilst he sorted himself out, the Dipper turned to face the river (and me) he would fly up to the nest to feed, presumably, the fast-growing chicks of the first brood.  Then it was away back downstream like a startled bumble bee.  This action was repeated about every three or four minutes but, occasionally, a bird would appear from upstream and fly straight to the nest site then beat a hasty retreat.  Did this signify that both parents were out gathering food?   It was almost as if the south-bound Dipper was checking all was right with the brood for he/she either simply stopped to look in or was in and out before you had time to take note.

Amazing what you can observe and enjoy in no more then thirty minutes!

Feeding behaviour of the Dipper: Arriving from downstream, perch and check everything is in order the proceed to nest. 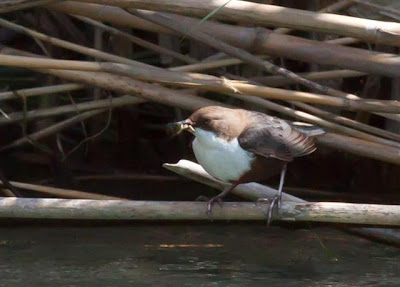 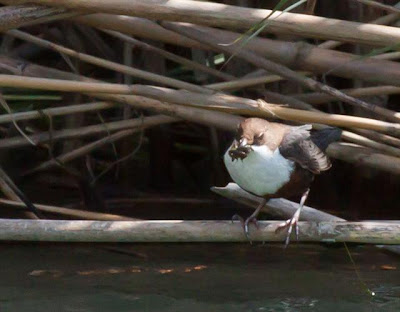 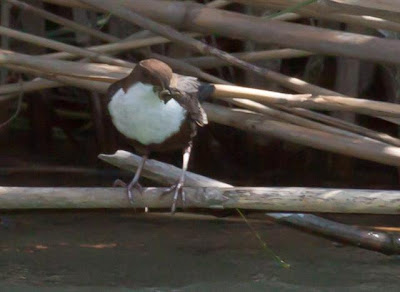 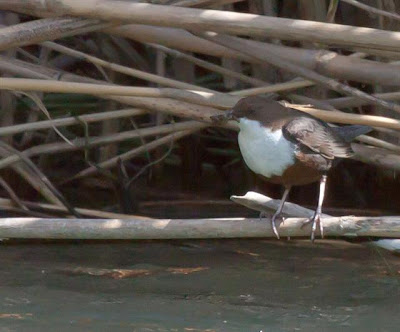 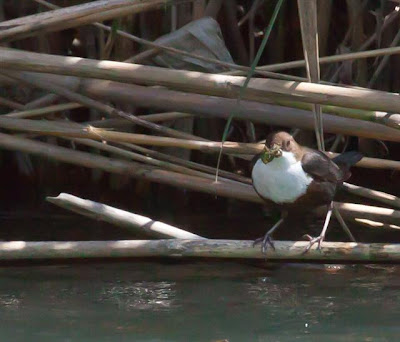 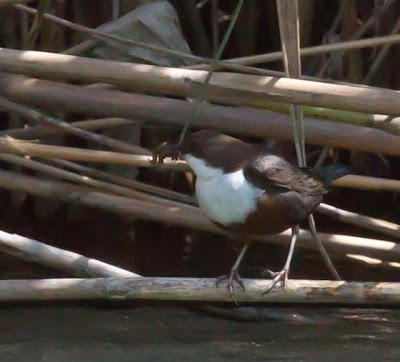 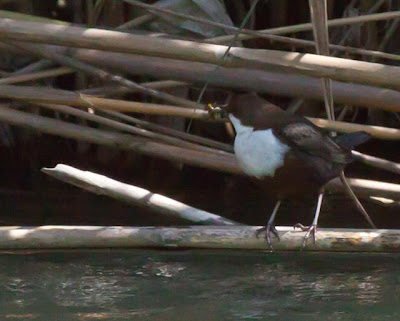 
Check out the accompanying website at http://www.birdingaxarquia.weebly.com for the latest sightings, photographs and additional information.
Posted by Bob Wright - The Axarquia Birder at 13:05