The day started bright and sunny with not a cloud in the sky.  Having collected Mary-Ann Murphy, Lesley Laver, Bryan Stapley (our birthday boy!) and James Moore at Puente don Manuel we set off up the mountain towards Loja for the monthly visit of the Axarquia Bird Group.  Once over the pass we then confronted some very dark cloud; just as the forecast promised, a mixture of cloud and sun.  What I think we did not make allowance for was how cold it was going to be once we had driven up the Sierra Loja and with all twelve of us rapidly searching for extra layers to try and keep reasonably warm in the cold wind.  Joined by Eric and Pat Lyon, Gerry Collins, Mick Richardson and his neighbour Steve Forster we set off up to towards the first, small quarry.  No sooner had we started the climb than we came across old friend, Michael McLaine who we had not seen for, perhaps, three years when last holidaying in this area.  People messing about at the quarry so straight on up to park the two cars at the turning point so that we could walk the short track to the main, lower, quarry where Eric and pat awaited us.  Indeed, just as we left the cars a quick telephone from Ellie Wallbank informed us that she had now arrived and was on on her way up the track; the "Dirty Dozen" were complete.

So here started what was to be a  very good day's birding with just on 50 species recorded plus some lovely orchids identified by Mick.  And no rain; that is unless you count the couple of heavy spots when we returned to the lower quarry on the way home to find one of the two, much to our surprise, species that we had not seen all day, a Blue Rock Thrush and Norther Wheatear.  (I should point out here that Eric and Pat had arrived a good half-hour before the rest of us and, whilst awaiting our arrival, had actually seen a Blue Rock Thrush plus Blue Tit and Greenfinch).

The quarry produced Black Wheatears, Black Redstart and Crag Martins whilst Barn Swallows and House Martins fed overhead and Blackbirds pecked about near the ruins below buy by far the sight of the site (what an expression!) was the adult Eagle Owl resting in the small hole immediately above its nest.  No sign of the , we think, single chick today but the adult remained on station the whole time we were there giving excellent views through the scopes to all present.  Indeed, the bird was still on station when we returned on the way home to record the group's first and only Blue Rock Thrush of the day.  In addition to the above, we had the odd Jackdaw and Chough pass over the top along with a hunting Common Kestrel and both Goldfinch and Serin were recorded.


Walking back to the cars, with lots of flowers to be identified and photographed, we quickly added a number of Azure-winged Magpies, the first having been recorded along with the resident House Sparrows whilst at the service station car park, and then a first Spotted Flycatcher (for me) of the year.  A number of Red-legged Partridges were also seen with many more added during the day whilst up on the mountain tracks.  Wood Pigeons put in regular appearances and, having been first heard by Mick, a little searching soon found the Short-toed Treecreeper.  Naturally, Chaffinches were everywhere.  A surprise for Mick, this being one of his local and regular patch sites, was the Great Spotted Woodpecker heard by Michael as he started his walk up from the car park until we picked him up then left our cars to walk to the main quarry.


So on up the track toward the tree-line where first Great Tit was seen and then a stop to see the first of the Stonechats.  Lovely to record a feeding family with one  youngster quite happy to sit exposed at the very top of a small tree in close proximity of the road. A large party of thirty plus Jackdaws passed overhead and around us followed by a handful of Choughs.  More Black Wheatears and Red-legged Partridges and then the appearance of the fist of a regular supply of Thekla Larks.  An Orphean Warbler was heard and then, immediately below us, the appearance of a rather splendid Bonelli's Eagle.  A Hoopoe flew rapidly down and awy from us.  Moving a little higher we stopped and waited until we successfully found a pair of Spectacled Warblers whist, above the opposite side of the track a single Griffon Vulture worked its way over the summit and the first of our Little Owls was seen resting on a low pile of rocks.  Onwards and upwards and a stop to check out a handful of small birds resting on the fence in front produced a a couple of Linnets, a Rock Sparrow and a single Southern Grey Shrike.

Having recorded our first Black-eared Wheatears we made our way up to the Charco de Negro pond and nearby cliff face in which a Chough had once more built its nest in the usual hole and our first Rock Thrush was seen, albeit rather distance sitting on an orange-coloured rock so giving it some considerable camouflage.  However, the unexpected of unexpecteds.  We simply look the other way and saw that another male Rock Thrush had actually alighted on the fence post not thirty yards away.  Off too soon to raise the cameras but then landed on the grass near the water and remained in the area for most of our picnic lunch time.  Very nice!  We even had another Black-eared Wheatear alight on the same fence and remain long enough to be photographed whilst all around we continued to record both Rock Sparrows and Rock Buntings plus a few Linnets.


Whilst looking at the Black-eared Wheatears, in addition to seeing both male and females it was interesting to note both the variation ion colouring on the back and the extent of the face masks.  We had what would appear to be very yellow/golden backs suggesting younger males but also some examples that were almost white, perhaps suggesting birds of at least four or five years of age.  Similarly with the face masks, some with a simple mask and others with extensive black as can be seen from the examples below. 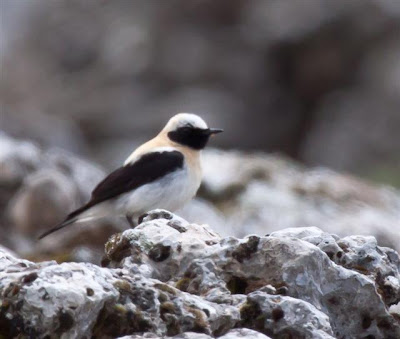 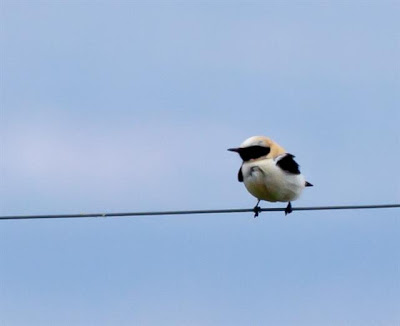 This area near the summit continued to produce large numbers of both Choughs and Spotless Starlings, especially in the stony fields near the electricity sub-station, and, being somewhat cold and having probably recorded all the birds we were likely to see, we decided to return to the main quarry in the belief that we would have more chance of finding a Blue Rock Thrush at this site.  We were not to be disappointed with a single male found almost as soon as we entered the quarry area, watched over by the adult Eagle Owl which was still stationed on the same rock as when we first arrived in the morning.  On the other hand, it was rather disappointing not to find a single Northern Wheatear during the day. 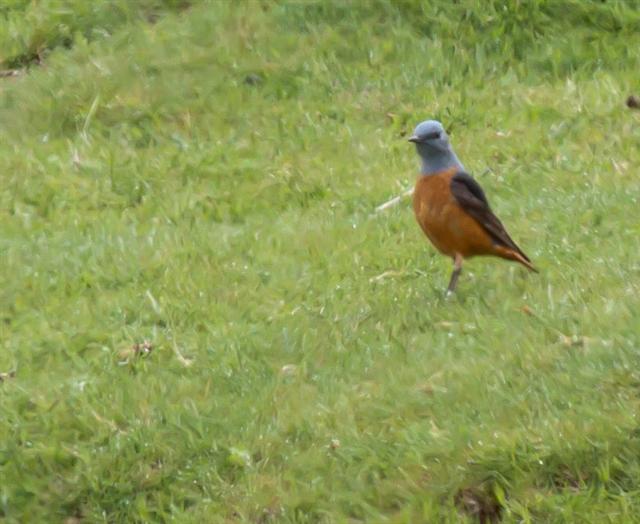 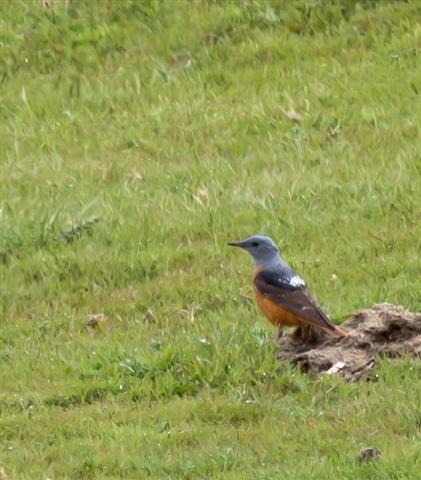 Having seen a number of female Ibex with their kids on the way up the mountain, a splendid male seen on the grass at the top rather completed the picture.


And so we started on our various ways home but still the birds continued to come.  Returning to the main track down Eric and Pat managed to record a Pied Flycatcher and the we five, no sooner having taken the Zafarraya road from the motorway stopped at the fist large field of cereal where we were delighted to watch two male and a single female Montagu's Harrier quartering the area.  Continuing on along the road, next up were a pair of Mistle Thrushes, another Hoopoe and we almost ran over a White Wagtail which seemed to take forever to get off the road.  Stopping for the ladies to find, identify and photograph more orchids, Bryan and I watched a Bee-eater and Corn Bunting on the wires before finally having a male Woodchat Shrike fly across in front of us as we started to make our decent from the pass at Ventas de Zagfarraya.


And so ended a rather lovely day's birding spent in dry, if somewhat cold, weather in great company.  The burning question now will be what have I missed from the above account; who saw what else on their respective homeward journeys?  I await your replies.