The Golden Oriole; what a cracking bird in its golden-yellow coat with black wings and that lovely red beak. Now you would think that a bird so bright and vivid would be an easy object to admire and desire but, once in its favourite Eucalyptus trees it suddenly disappears.  You then have to resort to bins and scope to find the bird, if you are lucky, and then hope that it is still there when you focus the camera. Easy bird to photograph?  Is it heck!

Well it was a lovely, warm and sunny start to the day and Jenny had an appointment in Solarno to be pricked all over by the dreaded acupuncture needles (you have to admire her for the way she supports all these various alternative therapies with such gusto) so I decided that I would drive her over, not for some monarchistic reason to take delight in her discomfort but, rather, because her friend Gerry has a balcony that overlooks the valley below with its stream and Eucalyptus trees and it can always be guaranteed to produced those lovely Golden Orioles.  This year, I was informed, the birds returned on 16 April and, yes, as soon as I looked at the first tree there was a Golden Oriole.  On the other hand, by the time I had walked three paces to pick up the camera the bird was gone.

There followed in excess of an hour of observation which resulted in at least three singing males and fleeting views.  A single male flew below me soon after we arrived, and was also seen by Jenny before her treatment started, and returned within a couple of minutes but no chance to lift, never mind focus, the camera.  There followed a continuous search of the trees on both sides of the valley below as I tried to locate another bird that could be, possibly, be photographed.  The trouble is that, even though exposed at about 200 metres distance below me at about 45 degrees, the birds still like to be in the shade with only the very occasional ray of sunshine on them.

Anyway, here follows a few record shots of one of the birds seen this morning. 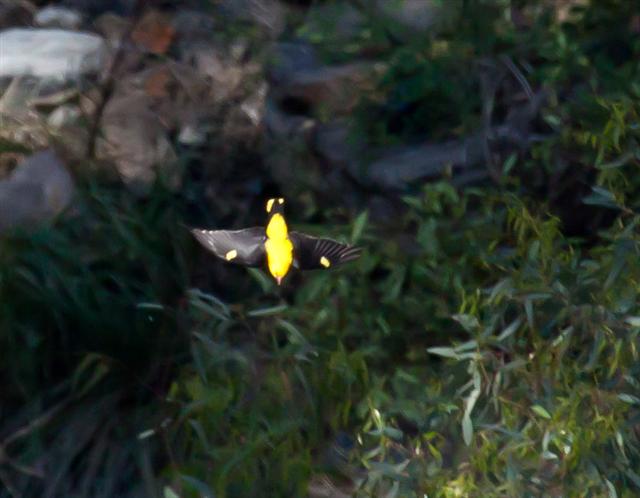 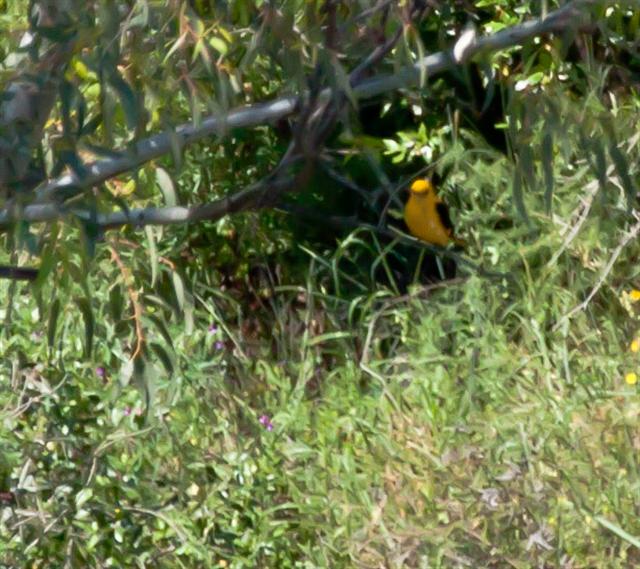 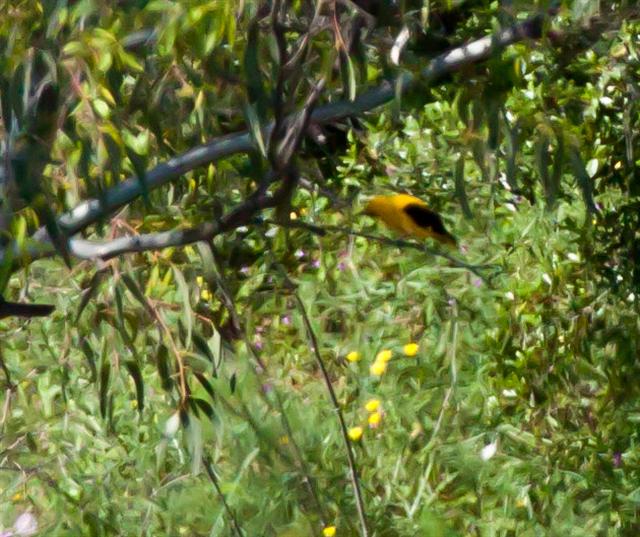 In addition to the Golden Orioles, I also had singing Nightingales and croaking frogs.  A lovely male Blue Rock Thrush was seen as we approached our destination and whilst there I also recorded Sardinian Warbler, Greenfinch, Serin, Goldfinch, Blackbird, Barn Swallow, Collared Doves, Spotless Starlings and House Sparrow.  The return journey also turned up Corn bunting, Thekla Lark and House Martin.  All in all, a very pleasant couple of hours.