Wet Birding in the New Forest

With the promise of heavy rain around 1pm I set off from home in Warsash before 7 in order to complete my birding for the month in the New Forest.  By 7.20 I was at Fishlake Meadows on the outskirts of Romsey and walking down the wooded path alongside the narrow canal at 7.20 in calm weather and the sun trying to break through.  Lots of early morning Swifts above me plus a couple of House Martins and Wood Pigeons in the trees.  A Blackbird on the path as a quartet of Whitethroats dashed across just ahead of it and the both Robin and Dunnock foraging at the side of the path a little further along.

No sooner had I turned left through the swing ate than a Great Spotted Woodpecker flew into the tree above me (the branch not the tree!) but had moved on by the time I extracted the camera from my rucksack.  With the camera to hand I was able to get a couple of shots of the Reed Bunting that was moving around in the next tree.

Another left turn and gate and then the path to the wo hides.  Lots of Chiffchaff now calling and soon joined by the Reed Warblers in the reeds to my right and left. Once t the main screen a number of Greylag Geese on the water, mainly asleep on the far side, along with Mallards, Gadwall and Coot.  A Great Crested Grebe paddled by and soon it was time to start the walk back to the entrance. At this point the Cetti's Warblers decided it was time to let all and sundry know they were about or was it simply an advance call to tell their friends that the wet stuff was on its way?  Minutes later the first rain drops so very much a hurried walk back to the main path where, at least, there was some tree cover which conveniently coincided with the heavens opening.

There then followed a slow journey back to the car with a mixture of shelter and exposed, short runs.  Good job I had a mac with me - but it was in the car!  And the rain stopped as I arrived at the car.  Just tome to do a little drying before moving round to the main road to check the large are of water where very little present but able to add Tufted Duck, a distant Heron and both Lesser Black-backed and Herring Gulls.

Once back in the car and off towards Fritham and the large pond at Eyeworth and the rains started again.  At least upon arriving I could park the car alongside the water's edge for some dry birding.  Canada Geese taking shelter on he far side and both Barn Swallow and House Martin feeding above the water.  Also on the water and close to me a good number of Mallards, both mature and well-grown ducklings. But then the rain stopped and blue sky appeared so able to get out of the and see the birds in realm life rather than through misty windows.  The bushes next to me had a constant stream of Blue and Great Tits along with Chaffinches and House Sparrows. 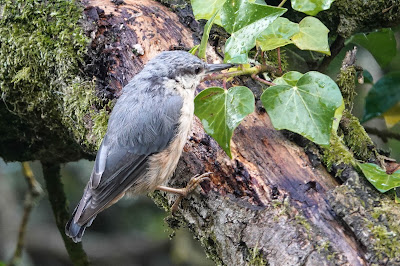 Also present, a couple of Marsh Tits and a similar number of Nuthatches, all looking rather bedraggled following the rain.  More Blackbirds behind me a a handful of Carrion Crows at the top of a dead tree on the opposite bank.  But best of all, a couple of Mandarin Ducks right next to me at the the water's edge.  At first I thought they were well-grown youngsters but, on reflection, suspect they were simply adults in eclipse plumage - but I am open to correction. 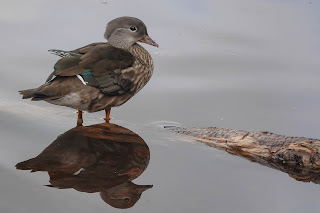 Finally to Blashford Lakes, north of Ringwood and a first stop at the hide overlooking the main lake, Ibsley Water.  Everywhere you looked it was white, not snow nor weed but scores, if not a hundred plus, Mute Swans.  Yes, both Black-headed Gulls and Lapwing near the hide its elf but it was then a case of using the scope to look amongst the white blanket.

To my right on and near the small islands/scrapes a dozen or more Egyptian Geese and at the far end scores of both Greylag and Canada Geese.  To the far ledt a massed flock of hundreds of Coot and then, on the more open water, the occasional Great Crested Grebe, a few Tufted Duck and the odd Herring Gull.  A small number of Lesser Black-backed Gulls was also found in the distance before my attention was drawn to the arriving pair of Ringed Plover and a quartet of Pied Wagtails.  Aklso strange to see a single, isolated juvenile Starling working the shoreline pretending to be a Common Sandpiper; most confusing for some!

But, perhaps best of all, a newly-arrived birder asked if we had seen the Black Swan reported at the site a fortnight ago to which he received a negative reply.  Then, within five minutes, he was able to state that he had found the bird feeding right at the back of the water, probably some 200 metres or more distant.  Luckily, I was bale to drop on it immediately albeit it took much time and effort to focus with the camera as the bird seemed to have its head in the water the whole time.  So apologies for the very distant record shot which is shown below.

Next it was a move across the road to the main reserve where very few birds were to be recorded but I did manage Chaffinch, Robin and Wren before entering the hide to note both Blue and Great Tits on the feeders.  A Greenfinch was "singing" outside the hide as I made my way to the far hide where many breeding Black-headed Gulls were located along with a few breeding Common Terns. Another Moorhen as I made my way back to the car along with both Wood Pigeon and a few noisy Cetti's Warblers.  Finally, as I set off back towards Ringwood the usual field held at least a score of foraging Jackdaws to complete a list of 34 species at the final site and almost 50 for the day.

Posted by Bob Wright - The Axarquia Birder at 08:43