Remaining cooler with a very light breeze and low tide set for 11 am I decided to walk along Warsash shore and on down to the Meandering Pool just beyond the beach on Southampton Water.  In the event, I carried as far as the start of Solent bay then turned inland towards Workmans Lane, round the horse fields, back along Newtown Road as far as the School of navigation before taking the narrow path down to the shore to complete the final 500 metres along the front. a final total of 8.4km in just under three hours.  And the end result?  26 species plus a "mystery bird" which I am still trying to identify but first distant sighting suggested either Tree Pipit or female Pied Flycatcher (latter seeming unlikely) but the distant record shot taken seconds later showing moulting head and shoulders leaves me somewhat confused.

Approaching the path alongside Strawberry Fields and looking at the exposed mud to my right a nearby Carrion Crow and a handful of Black-headed Gulls whilst a trio of Starling flew across the path inland. Almost immediately the first four of a total of 12 Magpies seen during the morning then five Pied Wagtails working the grass on the field.

Towards the School of Navigation pier more Black-headed Gulls plus the first Oystercatchers of the morning.  A couple of Wood Pigeon recorded and once past the pier far more gulls including a couple of distant Mediterranean Gulls. Two Little Egrets and then a few Herring Gulls whilst, resting on the bank of the spit, a lone Canada Goose. 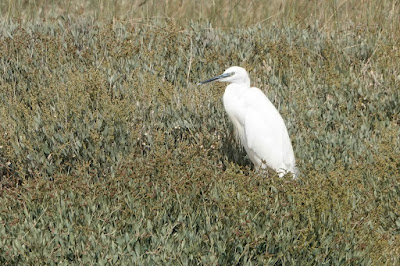 The walk along the beach to Hook Pond produced a male Mute Swan on the sea and once at the pond, in addition to more Black-headed Gulls, the female Mute Swan with her three well-grown cygnets.  Resting alongside a flock of 28 Black-tailed Godwits and on the water a couple of Little Grebe plus a score or more Mallards.

Continuing on southwards just the single Little Egret on the Meandering Pool but approaching Solent Bay very many Black-headed and a number of Herring Gulls.  In addition, numerous Oystercatchers taking the morning's total to a approaching 40.  Lovely to see a Sky Lark fly overhead and land in the grass not so far away.

Leaving the Meandering Pool I then came across the natural disaster.  Sometime in the past few days a  large fire must have taken hold of the gorse site between beach and meadow destroying at least 80%.  This is the guaranteed site for the local resident Dartford Warblers and their habitat almost completely destroyed so, maybe, no more sightings for a year or more.  Hopefully, this year's breeding cycle had been completed, so a good chance that the families may have escaped injury along with other wildlife.

As I set off to the turn inland, first a Collared Dove and then a Pheasant calling from the cover, in land, to my left.  Making my way up the path towards Workmans Lane I had a couple of Blackbirds plus more Wood Pigeons and then a Blue Tit on the feeder of the bungalow as I approached the entrance track to the horse fields.  A Song Thrush moved across the track in front of me and apart from the horses, there were numerous Carrion Crows to bring the day's tally up to approaching two score along with at least eight Rooks and a quintet of Jackdaw.

At the far end approaching the top lane I stopped to check a small brown bird sitting atop a large bush arrangement; all that could be identified was an apparent even mid-brown colour with what looked like a white "spot" mid wing and a pointed beak.  Probably ruled out Garden Warbler and even suggested a female Pied Flycatcher but the bird moved before I could lift the camera.  However, it, or another bird, came to rest a couple of yards further on and this time it was the moulting head and shoulders that came into distant view with the bins. Given that I could not see the breast, my thoughts then turned to Tree Pipit but I shall have to wait and see if any suggests come back from my "help line."

And so the circuit was completed but a mile later on rather than continue along the main road into the village centre I opted to return to the shore for the final leg of my walk. Resting on the bank of the Spit and another nearby a Grey Heron and then on the path alongside the Strawberry Fields a foraging Dunnock on the path to complete the morning's sightings. 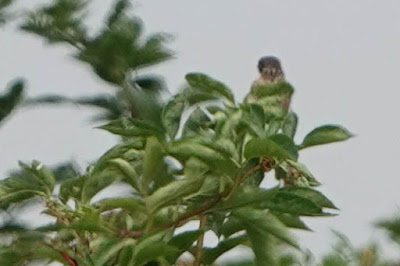 For the latest news follow the Axarquia Birds and Wildlife Facebook page for more photos and comments and the opportunity to share with the wider birding world.
Posted by Bob Wright - The Axarquia Birder at 07:24