With the visiting Lesser Yellowlegs reported, after a full week, to be still in residence at the western end of the Normandy Lagoon near Pennington Marshes I thought it was time to once again visit this rewarding site on the Solent coast south of Lymington. Departing early  to the accompaniment of a local Collared Dove and arriving with Jenny just before 8, we were in time to find the best parking place on Normandy Lane for the short walk down to the large lagoon.  A Magpie on the filed to our left, Wood Pigeons and Carrion Crows to our right and a dozen Barn Swallows above we soon on the lagoon's western embankment.  Lots of waders immediately on view but not helped by the sun coming in low to our right.  Lots of Redshank, Oystercatchers and a number of Shelduck immediately recorded, followed quickly by both Black-headed Gulls and a couple of Little Egret.

Now time to scan the water from half-way along the western embankment in search of the Lesser Yellowlegs.  Greenshank identified amongst the many Redshanks and a strange looking bird acting like a Phalarope with its tight-circle feeding activity but surely, more like likely a Redshank in the shade of the left-hand end of the large island immediately in front.  Back to the right-hand side where we found a single Grey Plover and as it paused bear a broke piece of concrete we saw the Little Tern resting at its end.

On round to the southern embankment where three other birders were studying the lagoon and one having been present since 5am and without success in finding the Lesser Yellowlegs.  Indeed, overnight the wind had dropped and changed direction so we were all surmising that the bird may have departed to pastures new. Below us another flock of Redshank along with a small number of Dunlin, a handful of Turnstone, more Oystercatchers and even a couple of Ringed Plovers.  Off to the far, northern, end both a pair of Little and a single Great Crested Grebe.  However, by far the best sighting was the pair of Red Knot, both still with their red fronts albeit most of the time asleep and facing away from us.

No sooner had a score of Canada Geese flown over westwards and away to the main marshland than we received a hand signal from the birder who had been on sight since first light that he had found our target bird so we remainers upped and move back to the west embankment ad I found myself standing in the original position where I first searched for the bird.  Now the Lesser Yellowlegs was almost underneath the embankment just a metre or so into the water and within ten metres of we observers.  And would you believe it, the very same bird I had seen on first arriving and acting like a feeding Phalarope.  Yes, smaller than a Redshank but more more like a Marsh Sandpiper.  What a way to end this part of our visit to Pennington Marshes.

Then followed the short drive to Lower Pennington to park the car at the end of the lane and walk down to the shore so that we could inspect the inland pools. Immediately upon arriving a Robin and the walk down to the shore produced Barn Swallows above, a pair of Whitethroats along with a couple of Wren and a handful of House Sparrows.  It was whilst checking the Greenfinch perched at the top of a large bush that we noticed the movement below and finally managed to catch a quick record shot of the feeding Willow Warbler.

Once on the embankment we stopped to watch a pair of Stonechat and moving eastwards to the large pool found a lovely flock of resting Black-tailed Godwit and more gulls, Carrion Crows, Shelduck and Oystercatchers.

Next a walk westwards along the embankment noticing the pair of Great Crested Grebes on the Solent before reaching the main lagoon which, sadly was very devoid of water. Lots of resting Black-headed Gulls along with eight Little Egret, Heron and Moorhen.  No shortage either of Mallards of mixed age. Close at hand a couple of Reed Warblers and a Lapwing checking out the lower path whilst, towards the sea, a Cormorant flew westwards.
The also very dry next pool provided a mass of Avocet including many juveniles.  Also a number of resting young Shelduck.  Wader numbers were made up with Dunlin, Common Sandpiper, Ringed Plover and a still summer-plumaged Sanderling.  far away to my left I could see a pair of Mute Swan and as I walked down the embankment to my final pool a Dunnock was feeding on the path in front of me.

It was as I approached this last water that I noticed the dark shape in the water grass on the edge of the Solet.  Closer inspection revealed a lone Whimbrel that then settle down to rest before I could get a record shot.  On the reeds below the track next to the pool a couple of Reed Bunting were bust foraging along the edges.
Then it was back to the path to take me inland and the car park, recording a number of Blackbirds on the way.  Before leaving I took the extra short walk to check out the large pool adjacent to the temporary camping site and here I found Mute Swan, Mallard, Coot and Moorhen not to mention the sixty plus Canada Geese.  On the far bank not only both Heron and Little Egret but  handful of resting Herring and a single Great Black-backed Gull.  Just when I thought I had finished birding for the morning as I walked the fifty metres back to the car, out of the bush and across the track but giving me just enough time to identify before disappearing into the foliage, a Lesser Whitethroat. 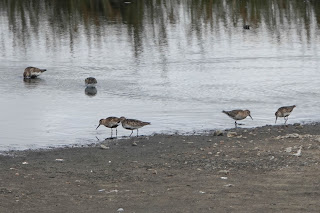 Posted by Bob Wright - The Axarquia Birder at 07:03