A pleasant day for a walk up the lower Hamble River, Warsash to the conservation area and back as the water reached steadily towards high tide with the only draw back being the strong breeze which had me holding on to my hat at times.  With virtually no exposed feeding area until half-way up the path the only birds to be seen were Black-headed Gulls of varying age and moult ( see the respective head shots).  But as soon as I approached the remaining now grassy islands I was able to pock out a pair of Great Black-backed Gulls and the first Oystercatchers of the morning.  On the inland side of the path a couple of immature Herring Gull with an adult on the river itself. 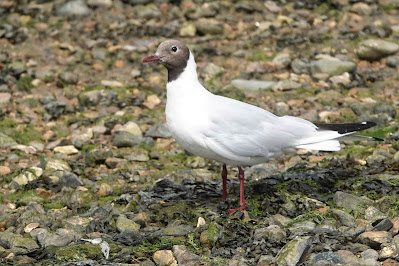 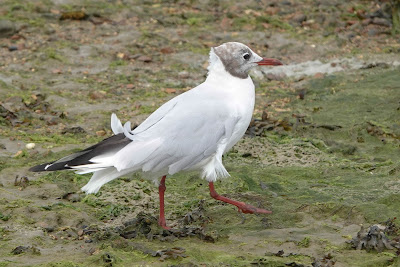 Looking at the resting Black-headed Gulls I noticed the dark shape which soon proved to be  sleeping Black-tailed Godwit.  However, upon enlarging the photograph not only did I discover that there was a second individual to the left but also in the far background a passing Ringed Plover.

Approaching the conservation area I picked up a couple of Herons and a trio of Little Egret before noting the resting group of Black-tailed Godwits with the Black-headed Gulls.  But on the adjacent inland water it was a small party of Redshank that were resting with the Little Egrets.

Making my way back to the start of the walk and checking the inland edges I soon found a Blackbird, pair of Magpies and a handful of Wood Pigeon.  A single Curlew was feeding on a still exposed mud patch and on the sea side a pair of Carrion Crows were busy foraging amongst the seaweed.

Finally, right at the end of the walk a second Lapwing and another Little Egret then, before leaving the shore, a Wood Pigeon had come to explore the water's edge for food so a closer rather  than distant record shot.   A final total of 15 species but signs that both Redshank and Black-tailed Godwit numbers are picking up even if, as yet, no sign of any Wigeon or teal, nevermind Brent Geese and those awaited waders.

For the latest news follow the Axarquia Birds and Wildlife Facebook page for more photos and comments and the opportunity to share with the wider birding world.
Posted by Bob Wright - The Axarquia Birder at 06:45