Lovely morning at the Rio Velez with my dear friend Bryan Stapely who who arrived yesterday evening from Darlington for a week's holiday at Torrox Costa.  Collecting Bryan at 9 we were at the river around thirty minutes later and ready to set off from near the road bridge towards the hide, newly repainted and tidied up, overlooking the newly-created lagoon, albeit now showing signs of further reduction due to the ongoing evaporation.  No sooner on site than we were welcomed by the resident House Sparrows and a passing quartet of Monk Parakeet.  A Spotted Flycatcher, one of five seen during the morning, had established itself on the nearby fence and the Nightingales were letting us know that they, too, were present in numbers.

As we walked down the track to the hide a group of Goldfinches flew over along with a pair of Mallard.  In the stream (river!) at the back the first of the morning's Little Ringed Plovers and a pair of Moorhen.  A handful of Blackbirds were also recorded in this area.

And so on to the hide where we noticed that, at last, some remedial work had been undertaken to clean and add preservatives to the hide and adjoining furniture plus removing the broken rails.  A few Barn Swallows were feeding over the water plus a larger number of House Martins.  The latter were also collecting mud for their nests.  These were than joined a small number of Pallid Swifts and later Common Swifts making use of the surface for feeding and/or  drinking.  at the water's edges a pair of Black-winged Stilts and good numbers of both Ringed and Little Ringed Plovers.  In addition a pair of White Wagtails were also recorded.

It was whilst looking towards the sea to identify the resting gulls that we noticed, at first three, but looking closer no less than seven resting Squacco Heron. What a lovely sight. 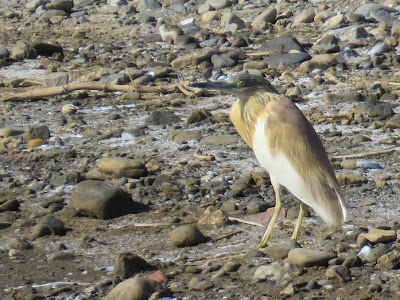 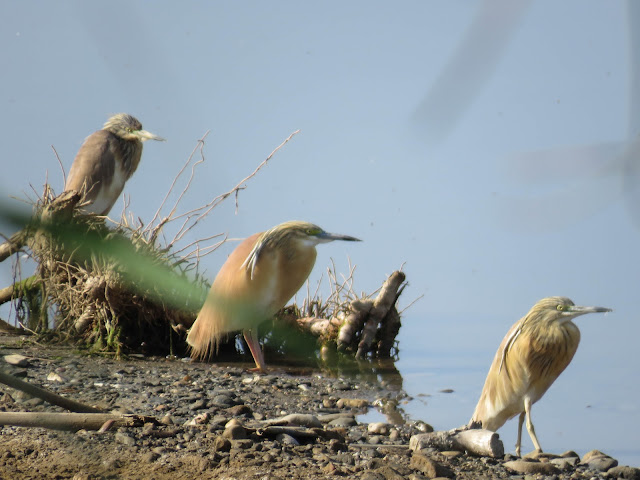 Meanwhile, a handful of Rock Doves flew along the far bank and we picked up the first of two Purple Swamphens.  With regard the gulls, having quickly identified a couple of Black-headed and half-dozen Yellow-legged Gulls, it was really delightful to also note that there were a dozen Audouin's Gulls in the roosting area.

Time to move on and from the beach we were able to look up the river and see more Moorhens and at least a dozen Mallard.  Walking back along the far bank we quickly found a small number of Reed and a couple of Cetti's Warblers,  Then more Blackbirds and Nightingales and ere long we were almost back to the car when we had our first raptor of the morning as a male Kestrel hovered above us.

A drive under the bridge to check out the growing fields up river produced a couple of Woodchat Shrikes on and off the wires along with a handful of Spotless Starling.  So off to Velez Malaga to top up the fuel tank and then out the back of the town to take the Camino Algarrobo through the lovely site of Las Campinuleas where we encountered over a dozen Bee-eaters.  For me one additional treat as entering the gorge of the Rio Guadalfeo towards Velez de Benaudalla a Hoopoe crossed the road in front of me.  A lovely end to a most enjoyable morning in Bryan's wonderful company.  Enjoy the rest of your holiday Bryan and Paula. 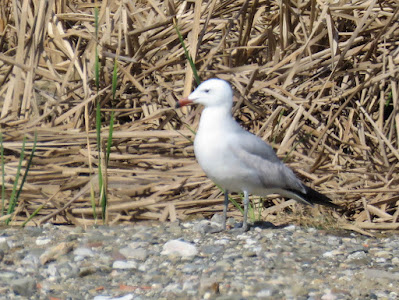 Posted by Bob Wright - The Axarquia Birder at 12:07