Car serviced by midday and the rain appearing to ease back so decided I would return home via the Camino de Algarrobo which takes me through a former enjoyed birding site, Las Campinuelas.  But would the Bee-eaters be using this site once again?  They certainly would!  Arriving at the western end near Velez Malaga i stopped to admire a Kestrel on top of a pylon and looking quite forlorn following all the heavy rain.  Looking around me I also found many Collared Doves and Wood Pigeons and a Hoopoe was calling nearby.

As I eased down the hill I started to hear the calling Bee-eaters and then found my first well-concealed in a leafy tree.  But once one found scores were to follow either flying around the area or resting on the nearby wires.  Below them a couple of Crested Lark and then a single Blackbird. A single Goldfinch was also on the wires and as I drove along the gravel track next to the dry river bed a number of Barn Swallows were busy hunting their late lunch.  Turning up from the river bed to take the road on towards Algarrobo and the motorway home I immediately came across a handful of House Sparrows and a single Spotted Flycatcher on the top of the low fence.  On the opposite side of the road a Serin then followed by a half-zen Spotless Starlings.  Amazing to think that a short deviation last less than twenty minutes in poor weather produced two new species for the year. 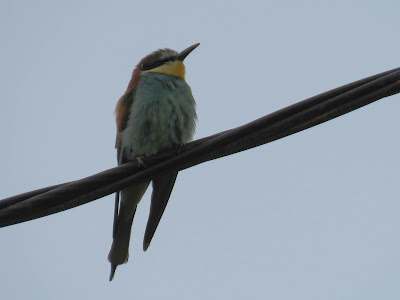 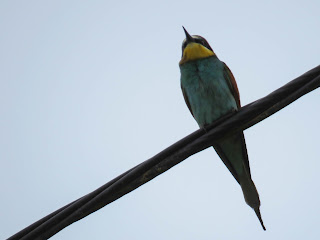 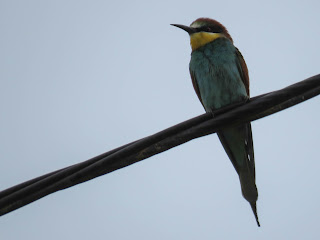 For the latest news follow the Axarquia Birds and Wildlife Facebook page for more photos and comments and the opportunity to share with the wider birding world.
Posted by Bob Wright - The Axarquia Birder at 08:27