Back in Velez de Benaudalla by mid-afternoon so decided to pay an evening visit to the Charca de Suarez in Motril.  AS usual I approached the site by driving east along the Camino Patria and had soon recorded Collared Dove and Barn Swallows.  However, best of all a patient Turtle Dove sitting on the wires awaiting its personal photo call. Also recorded before arriving on site a couple of Rock Doves, House Sparrows, a pair of Goldfinches and almost a dozen Serin.

Once inside the reserve straight to the Laguna del Taraje, passing a pair of Spotted Flycatchers, Blackbirds and a pair of Greenfinches, where only Mallards, a single Little Grebe and a departing pair of Little Egrets were recorded.  The hide at the far end had a pair of Mallard, Red-knobbed Coot and a couple of Moorhen on show.

On to the Laguna del Alamo Bklanco where the grass seemed even higher and completely blocked out any view of the back but the falling levels had produced mud and, in turn, this had attracted a Common Sandpiper, Ringed Plover and couple of Dunlin.  Meanwhile, lots of noise from the resident Cetti’s Warblers.  House Martins continued to fly overhead as I made way back into the main reserve and the clockwise path.

A Nightingale rested beneath a bush as I passed and once inside the hide it was obvious that the main occupants of the Laguna de las Aneas were a mixture of Mallards and Red-knobbed Coots.  Just a handful of Common Coots and a couple of Common Pochard. Checking the edges found a lovely Heron and almost a dozen Little Egrets either roosting in a tree or on the far bank.  However, keeping quite next to one of the above Little Egrets an adult Night Heron and a second not more than two metres away but well hidden by the greenery.

Plenty of Moorhen to be seen and even more surprising at least eleven Common Sandpipers, mainly resting atop the poles sticking up out of the water.  Just the four Cormorants on the water and another Little Grebe before time to make my exit from the shortened visit with only the many calling Reed Warblers to add to the species list for the evening but also a pair of Spotted Flycatchers that seemed to stay with me for the length of the track. 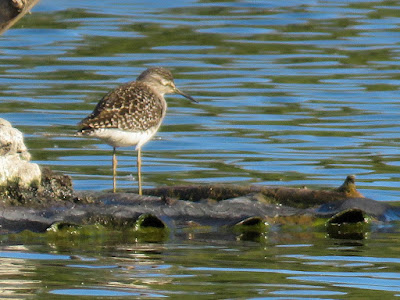 For the latest news follow the Axarquia Birds and Wildlife Facebook page for more photos and comments and the opportunity to share with the wider birding world.
Posted by Bob Wright - The Axarquia Birder at 05:06