Finally out of the house for a last birding walk before our departure back to Spain.  Dry, but cloudy and  breezy walking the shore of the Solent south from Warsash.  With the tide well out by now, scores of both Black-headed Gulls and Black-tailed Godwit making the most of the feeding opportunity on the muddy flats.  Indeed, by the time I returned there was a continuous line of Black-tailed Godwits in front of the moored yachts. 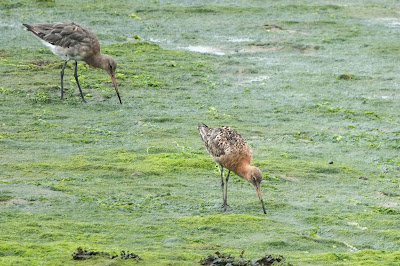 Finally making my way round the confluence of the river to access the shore of Southampton Water numerous gulls, including a small number of Herring Gull, scores of Black-tailed Godwits and a good number of Redshank all busy feeding on the newly-exposed mudflats. More concentrated viewing also identified a Little Egret and many Oystercatcher.

Very little to be seen until I reached the Scrape (pond) at the back of the shore where I found a number of Mallard, a handful of Little Grebe and single Little Egret and sleeping Heron.  But plenty of ripe blackberries to whet my appetite!

Making my way back to Warsash the tide had receded sufficiently to reveal the long spit at the mouth of the Hamble upon which a couple of Cormorant were resting.  There were now five Carrion Crow on the mudflats and the first of three Curlew were noted.  A large flock of Starling flew down to the shore line to forage.

Almost at the end of the walk before I saw my first Wood Pigeon, most surprising, and then a Robin singing its heart out from the top of the sailing club headquarters and with the best possible view over the water.  Rather than first, my sole Magpie was the last sighting of the morning.

Check out the accompanying website at http://www.birdingaxarquia.weebly.com for the latest sightings, photographs and additional information
Posted by Bob Wright - The Axarquia Birder at 07:35