Message from my friend Chris this morning to inform me that a Dotterel and kettle of Black Stork had been recorded at nearby Las Campinuelas yesterday (late) afternoon so decided to get in the car and head off for same.  This time I did not park up and walk the circuit, rather I drove to the muck heap so that I could check out the barren, open land (plus the muck heap) by using the car as a hide. As I entered the area a quartet of Cattle Egrets on the wires watching the harrowing and a Blackbird crossed the road.  Once at the muck heap I watched as a number of Crested Larks made a hasty departure but there, on the top, a very patient juvenile Woodchat Shrike which was happy to pose and have its photograph taken.

Whilst sitting quietly in the car at the muck heap I also recorded a nuber of Stonechat and a lone Whinchat along with a pair of Greenfinch.  Then it was off on a very slow, lots of stopping drive in the open along the various tracks. In addition to the numerous Crested Larks and many Stonechat I also found a good number of Northern Wheatear and, at the same time, there was a steady movement across the area of Barn Swallows.  A lone Hoopoe also flew over and then on to the top of hill and back down past the model aircraft runway.  This area produced a handful of House Sparrows and a charm in excess of 50 Goldfinch.

More Northern Wheatears before finding a close, long-resting Whinchat giving a better photo opportunity.  back to the muck heap which was now hosing a couple of Yellow Wagtails.

rather than return the same way I headed up along the Velez Malaga road to take the Algarrobo camino to check out the spring  that I normally visit soon after the start of a "normal" walk round the site.  More Blackbirds but the three pomegranate trees to the far side contained over-fresh fruit and sitting in the middle a young or female Spectacled Warbler.  Even better, concealed behind some dry twigs at the bottom of the tree, I found my first Wryneck of the year.  And returning to the car a Sardinian Warbler joined the others.

And so back home with a smile on my face to greeted by the ever-present Monk Parakeets. 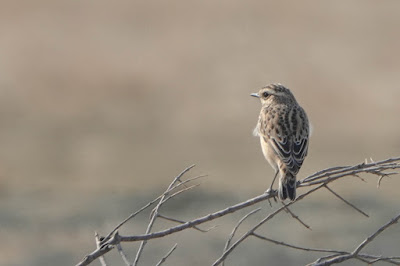 Posted by Bob Wright - The Axarquia Birder at 07:02