Following a message from friend, Derek Etherton and a link to google maps on the phone, I took off this morning to visit Campanillas to seek out the long-staying Pectoral Sandpiper.  Good job I had the pin or I would never have found the now not-so-flooded field.  Also not helped the huge amount of traffic on the motorway but, nevertheless., eventually on site before 10 o'clock and a most enjoyable and rewarding hour spent watching the bird life along with a couple of Spanish birders who were already resent.

Driving down the narrow track above and next to the fenced field I immediately noticed the dozen White Storks; the most filthy and tired looking I have seen for many a year.  Also present a couple of Little Egrets but scanning with the binoculars produced many more.  Whilst also checking the number of Cattle Egret present, taking advantage of the horses disturbing the soil, I watched a Hoopoe fly past in front of me.

Scanning around the shallow pools I quickly found a good number of Little Ringed Plovers and many, many Yellow Wagtails both Western (Flavisima) and Iberian Blue-headed.  But where was the star of the show, the visiting Pectoral Sandpiper?  A quick word with one of the Spanish birders and the bird was pointed out to me so that I could spend time observing its feeding activity.

In the distance I could hear Collared Doves and saw a few Spotless Starlings but also present on the wet grass a number of White Wagtails. t the far end of the field at  mixed flock of at least 40 Serin and almost as many Goldfinches.  To add a little variety both a couple of Linnets and Greenfinches were also recorded.

Whilst watching these small birds I saw the arrival of a large kettle of White Storks and, this time, I mean "White" Storks.   I got the distinct feeling that they took one look at their dirty, scruffy cousins down below and decided that this was not the best place to stop for an hour or so! 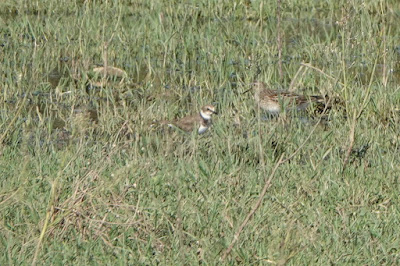 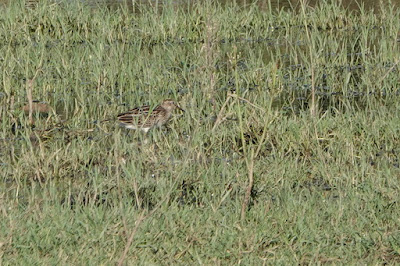 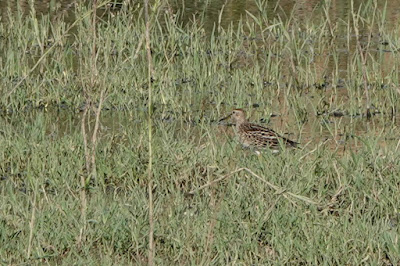 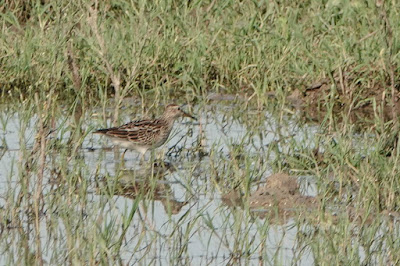 Check out the accompanying website at http://www.birdingaxarquia.weebly.com for the latest sightings, photographs and additional information
Posted by Bob Wright - The Axarquia Birder at 12:37