Arriving back in Spain after the long sea crossing from Portsmouth to Bilbao early on Friday 3 September, most of the birding occured on the first day as we drove south-east to Tramacastiel in Aragon, just beyond Teruel.  The initial journey was in low cloud with much dampness and mist and the occasional spots of rain whereas by afternoon the skies were beginning to clear producing very warm sunshine.  The initial journey of over two hours took us to our first planned stop at the Laguna de Pitillas in Navarre.  However, before reaching our destination we had our first resting and very damp-looking Buzzard followed by a couple of White Storks at their tower-top nest site.  Continuing on we added Barn Swallow, Spotrless Starling and a number of Carrion Crow before a Red Kite appeared overhead.

Arriving at the Laguna de Pitillas the weather had improved but still poor light and not helped that I was not carrying a spotting scope with me on this occasion.  However, no sooner had we arrived at the water's edge there were a number of Mallard and very quickly we found a trio of the local breeding Mute Swan.  Searching the water I then added Shelduck, Little and Black-necked Grebe.  Reed Warblers were still calling in the reeds and perched on one of the rails in the water  the remaining Common Sandpiper having already noticed a couple flying low past me as I approached.

Making my way back towards the Visitors Centre I noticed the good number of both House and Sand Martin along with Barn Swallows feeding over the water in front of me.  In addition, there were still a few Common Swift to ne seen.  A Kestrel was seen as we made our way to the tack running alongside the back of the laguna.  Passing the few House Sparrows near the farm buildings back at the entrance, all seemed very quiet apart from a handful of Goldfinch as we made our way down to the shallow end only to discovered there was no water, all had dried up.

On the other hand, the return drive back to the main road was to prove very much more productive despite we were now facing the Sun.  No sooner had we seen the quartering Marsh Harrier than at the distant water's edge we recorded both a Redshank and Grey Plover.  having noticed the continuing small bird movement n the low bushes and shrubs next to the fane on our right we finally caught up with a rather handsome Grey Wagtail on a clear piece of ground followed by the first of at least six Whinchat.  No sooner seen that we also found a single Melodious Warbler.

All in all a most rewarding visit as we continued on our way with a three-hour drive to the Laguna de Gallocanta in Aragon but not before encountering more Buzzard, Magpie, Wood Pigeon and a rather delightful Roller perched on the roadside overhead wires.  The laguna itself, though, was a major disappointment.  Following recent heavy rain it was not so much the river across the track that I manged to dive through but the track itself on the other side with its deep and muddy ruts made by passing tractors.  Probably not passable even with  4 x 4 so best to call it quits, turn round and head off on to our overnight stop where, at east, we reach at a more reasonable time.  All we managed to record at the site was a White Wagtail and more Barn Swallows, a Jackdaw near the farm buildings and large flocks of Black-winged Stilts and Lesser Black-backed Gulls.  As we approached the flooded road a Great Tit and Blackbird disappeared into the nearby trees.  However, making our way from the laguna to the country lane a Northern Wheatear was disturbed on some nearby rocks.

Tramacastiel was an idyllic, almost deserted hamlet high in the hills.  Approaching many empty and ruined buildings we finally found the village centre at the end of the road with a lovely church and some beautiful new and restored homes.  Less than fifty inhabitants and no one under twenty years of age, we had a lovely room in the only bar in town and awoke to House Sparrows and Spotless Starlings and as we drove out of the village a Blue Rock Thrush put in an appearance. 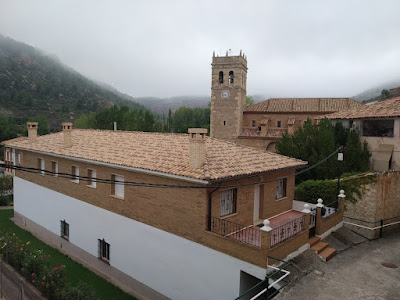 Continuing on down to the main road to meet our son in Valencia province we also found more Carrion Crows, Buzzards, a Raven and a couple of White Wagtails.  So ended, in reality, our birding drive as, following an overnight stop in Murcia, it was straight back to Mezquitilla on the Sunday with the occasional Feral Pigeon, Collared Dove and Spotless Starlings.  But we were welcomed home by the local Monk Parakeets!

Posted by Bob Wright - The Axarquia Birder at 01:57