Following yesterday's excitement at Roquetas de Mar and an overnight stay in nearby Aguadulce, it was time to head off along the A7 motorway to Cabo de Gata and meet up with Dave Elliott and his Arboleas Birding Group.  A somewhat cloudy and cool start to the day but arriving in Pujaire, less than  five minutes with plenty of time to spare I was able to take a break and enjoy my breakfast.  Just as well as a few spots of rain and looking very dark but twenty minutes later the sun was working its way out through the breaking cloud for what was to be a very warm and sunny day.

Arriving at the hide on the entrance entrance bend to Cabo de Gata Dave and colleagues were already in attendance and had already recorded some good birds as per Dave's already published report.  On the wires across the road an Iberian Grey Shrike and a little later joined by a Kestrel.  Meantime, on the water, no shortage of Flamingos, Slender-billed Gulls, Black-tailed Godwits and Avocets.  Use of bins and scope soon added a rage of waders including Dunlin, Black-winged Stilt, Ringed Plover and Redshank. Towards the back of the this first pool a few Herons were also noted along with the many Little Egret.  I missed the Curlew that a couple of members saw briefly behind the dune towards the sea but the Crested Lark posed  patiently on the neighbouring wall until all had taken notice.

Very few ducks to be seen with just a single Shelduck and a handful of Mallard.  A very distant raptor was seen above the church and by carefully tracking the bid with scopes it eventually revealed its rump and we were all able to confirm a female Montagu's Harrier.  Spotless Starlings were also on the wires and nearby tree.  The final addition was a Woodchat Shrike working the low trees away to our right in front of the dune.

Having been pre-warned about the "specials" found at the week-end we all then made our way down the back track to the rear hide.  Lots of Barn Swallows on the move and more and more Avocets and Slender-billed Gulls noted as we made our wat eastwards.  During a brief stop we were able to check the Turtle Dove that had crossed in front of Dave's car and was now resting, well-hidden in a low bush between track and pool.  Out across the water we watched the approaching female Marsh Harrier that soon had most of the Slender-billed Gulls and Avocets up in the air. 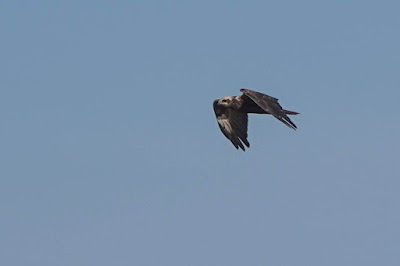 Once at the hide much time was spent trying to find one or more of the reported Lesser Flamingo, Red-necked Pharlarope and Temminck's Stints - buy with no success.  On the other hand, amongst the Dunlin, Redshank and Ringed Plover we did find a single Ruff and a Greenshank.  Behind us we also recorded a very active Willow Warbler foraging in the nearby bushes.

Back to the village for a coffee break then along the sea road, noting Rock Doves (Ferral Pigeon) and Lesser Black-backed Gulls to check out hides 2 and 3 before making a longer stop at the Public Hide. At the first of these hides we found both Woodchat and Southern Grey Shrikes and watched the arriving trio of Glossy Ibis.  A Cormorant was seen resting on an island.  Another Willow Warbler and I found a single Spotted Flycatcher in front of me.  Dave also note a single Spoonbill crossing the pool to our right as it headed towards the sea side of the water.

Walking to the Public Hide the best bird of the day with the appearance of a Whinchat on the fence but, having flown away, it was soon re-discovered in low bushes and all managed to get a sighting albeit the camera would not not focus on the bird - a sort of drat and double-drat!  Once safely ensconced in the hide itself Black-necked Grebes were found on the water along with a single Sandwich Tern.  The water to our right held a good number of Black-headed Gulls in addition to more Flamingos and Avocets. Leaving the hide where Dave and friends said their goodbyes to return home we found a trio of Thekla Lark but, still too early for me, I decided to stay on a while.

First up the hill and over towards the lighthouse but nothing to see so returned and once more took the back track for the whole length of the salinas to try and locate the "missing" trio of species.  Between the roundabout and hide there were very many Black-headed and Slender-billed Gulls along with numerous small waders.  Mainly Black-winged Stilts,  Dunlin, Ringed Plover and Sanderling but also Redshank, Kentish Plover and Little Stint.

I even found a single Turnstone and despite the constant movement of Barn Swallows there were no other hirundines.  Now very warm so decided to head on back to Mezquitilla arriving home by mid-afternoon and a total, for me, of 40 species.

Check out the accompanying website at http://www.birdingaxarquia.weebly.com for the latest sightings, photographs and additional information
Posted by Bob Wright - The Axarquia Birder at 02:16