Lovely sunny start down here on the coast at Mezquitilla so decided, as I would be on my own, to pay a visit to the Sierra Loja in the hope that wintering thrushes may have arrived.  Given enough time, then to carry on to Huetor Tajar to check out on the wintering Little Bustards and Stone Curlews.  Picking up Mallard, Spotless Starling and House Sparrows as I made my way towards Zafarraya, I then also recorded both magpie and a quintet of Red-legged Partridge as I made my way over the hills to Loja.


Then it was straight up to the mountain track to the summit of the Sierra Loja at about 1480 metres.  Chaffinches, Serin, Great Tit and Blackbirds at the bottom and as I ascended I also added Thekla Lark, Black Redstart and a few Jackdaw.  A special surprise when I stopped at the breeding site of the resident Spectacled Warblers and was rewarded with a good view of one the members.  Soon after the first of a trio of Iberian Grey Shrikes and then it was the turn of a Stonechat before coming across a flock of over 100 Chough.


Making my way past the old cave I eventually found a Black Wheatear but no sign of any wintering thrushes other than a couple of Blackbirds and a single Song Thrush.  making my way back I stopped to photograph what I though was a pair of Stonechat on a rock alongside the, now, very muddy track.  But, just minute, that's not a Stonechat!  No, a handsome Alpine Accentor posing next to the Stonechat and so giving a prefect comparison in size and colour.  But hope soon dashed as my friend John Wainwright kindly pointed out that it was in fact a very fresh, first winter female Stonechat. 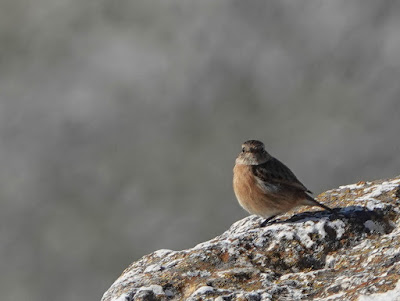 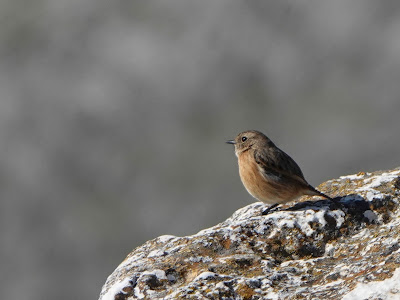 And so on down the mountain with a stop to try for a photograph of the Little Owl to my left and a pair of Sardinian Warblers as I neared the tree-line.

A short stop to buy some refreshments after leaving the motorway for my visit to Huetor Tajar and as I crosses the river to enter the town I could not help but notice the few Greylag Geese amongst all the domestic varieties plus a single Grey Wagtail.  Then it was time to park up and walk the usual path through the fields at the far end of the high street.  Immediately a departing Crested Lark then a pair of Zitting Cisticola.  Half-way down the path I stopped to check out the handful of Olive trees and the neighbouring bare tree.  Mainly Serins but also many Chiffchaff, a few House Sparrows and a also at least a couple of Tree Sparrows.  A White Wagtail came to join in the fun and then on to almost the far end to check out the usual fields on my left where I duly found a few Stone Curlews and a nearby Meadow Pipit.  Next to them a flock of about fifty Rock Doves/Feral Pigeon feeding on whatever had just been planted.

Next of to where we found the Little Bustards last month and much searching to discover maybe a half-dozen but well hidden in the growing greenery.  Returning to the railway bridge I took the track into the neighbouring fields and apart from more Goldfinches and Stonechats duly found about ten Little Bustards out in the open but, sadly, the photographs were very disappointing. 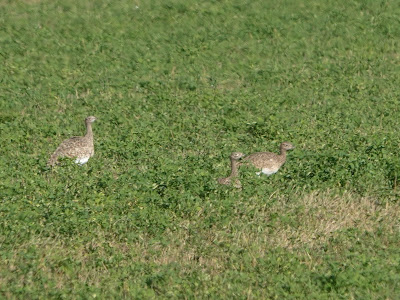 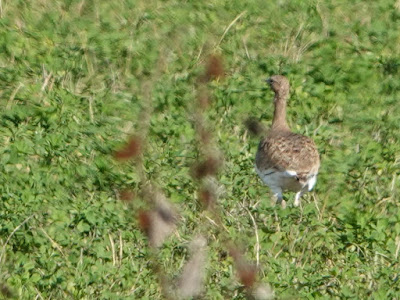 A Magpie took off and as I made my way back to the river, no chance of crossing given the state of the land and water following heavy rain, so used the bank to make progress.  Lovely to record a singing Sky Lark and then a few more Blackbirds followed by a pair of Red-legged Partridge and a couple of Cattle Egret before finishing up with another Heron and a handful of Chaffinches.

On the whole, a most enjoyable and protective day.

Check out the accompanying website at http://www.birdingaxarquia.weebly.com for the latest sightings, photographs and additional information
Posted by Bob Wright - The Axarquia Birder at 00:57