Weather brighter than forecast so arrived at RSPB Frampton Marsh near Boston by 8.30 having recorded Rook and Pheasant on the narrow road approaching the reserve.  On arrival straight to the small car park near the high bank to check out the favourite sites.  What a surprise!  major conservation works have been ongoing since the stat of the month with the digging out of ditches, levelling ground, emptying the  northern lagoons to treat the weeds and preparing for the installation of "predator proof" barriers to keep out foxes, badgers etc from the breeding area of the Avocets and other waders.  Naturally, all this disturbance meant that very little bird life to the left of the road and the fields on the opposite side were well flooded - but lots of birds.  But the sun was shining from a clear blue sky even if the temperature was in low single figures.

Looking over the workings to the north there was hardly a bird to be seen save for the occasional Lapwing then a single Avocet and a distant Little Egret.  A few distant Crows and Magpies were also noted before I turned my attention southwards over the flooded fields.  What a contrast.  Close at a hand small groups of mixed ducks including Wigeon, Teal and Shoveler.  But much more in abundance were the nearby large flocks of both Lapwing and Greylag Goose.  Given the additional numbers of both Wigeon and Teal on the reserve I would estimate flock sized of approaching 200 for Wigeon, Teal and Greylag but most likely more than 500 Lapwing.  However, all these species were far out-numbered by the huge flock of Golden Plover which, if not yesterday's high total, certainly exceeded 2,500.

Walking on down the lane and up the steps to the high bank I actually saw the amount of water on the saltmarsh with a high tide, certainly not the place to be caught unawares!  Over to my left a small group of Brent Geese and a Curlew with the first Redshank of the day on the edges below the bank.  making my way back to the car to return to the main car park I then picked up a good-sized charm of Goldfinches and a large flock of Starlings.  The nearby channel contained more Wigeon and Teal along with plenty of Mallards and a couple of Mute Swans.


Once inside the Visitors Centre I was able to check out the occupants of the main pool to the front.  Not as full of ducks as I might have expected but, again, mainly Wigeon and Teal along with a few mallards and more Shoveler.  A small group of Pochard were seen away to my right and in front of me a single feeding Little Grebe.  Only Goldfinches and a single Great Tit seen on the feeders.  On the other and, there was a quartering Marsh Harrier working the distant river bank.


No scope to cut down on weight as I set off on the anti-clockwise boundary trail, through the hedgerow path where I cam across a flock of House Sparrows and then on to the far side in the hope that I would get a better view of the Golden Plover flock with the sun behind me.  A handful of Meadow Pipits were recorded and then, meeting up with one of the voluntary warders, he pointed out the resting Little Owl on a pile of stones and I drew his attention to the posing Red-legged Partridge on the next such pile.  He also informed me that the four Whooper Swans he had seen opposite the main car park on arrival were now feeding with Mute Swans beyond the ruined barn away to the south beyond the Little Owl sighting. 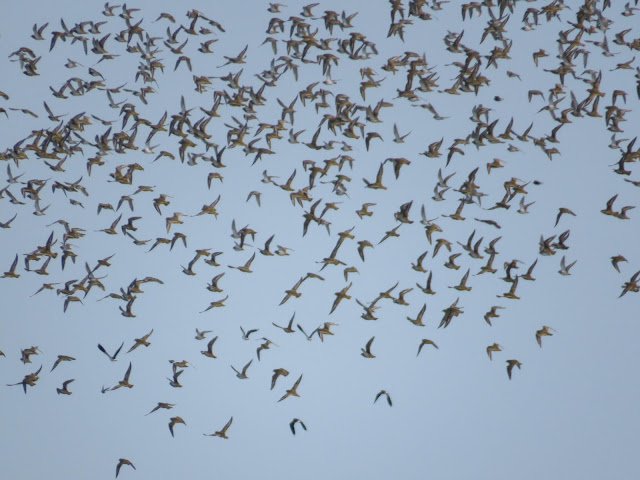 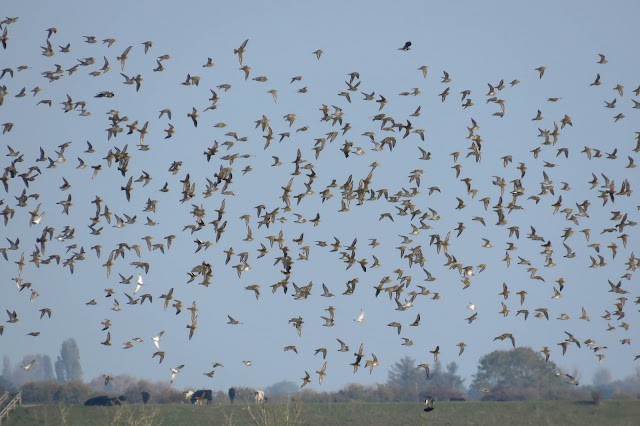 Having watched the Golden Plovers in flight and noted their large number along with very many Lapwing, I stopped further along the path and managed to get a view of 18 swans feeding away in the greenery to the south.  I thought I counted at least six Whooper Swans and the a group of four took off and flew back to the flooded field behind me; most probably the original four Whoopers.


At this point I descended the steps to walk the newly-created "Berry Track" below the bank.  Rather wet under foot but with berry-laden bushed either side it was no wonder that I disturbed a number of feeding Blackbirds.  Back up on the bank top path and on towards the main sea bank.  A trio of Ruff in the pool below and many Black-headed Gulls.  Looking over the main sea bank a couple of Lesser Black-backed Gulls were noted along with more Brent Geese and, by now, the tide had receded and once more the saltmarsh had taken on its familiar picture.  Walking back along the road to the Visitors Centre I picked up a Greenfinch feeding with the Goldfinch flock and to my right a couple of Moorhen had put in an appearance.


Collecting my picnic lunch from the car I then headed off to the 360 Hide where I was informed a Long-tailed Duck had been observed.  Lots of Brent Geese along with Wigeon and Teal but no Long-tailed Duck.  A resident informed me that the bird was much nearer the saltmarsh.  Ah well, such is life! Towards the East Hide I could see a few waders and identified Redshank and Dunlin.  I also discovered that this was where the Canada Goose flock was feeding.  Then my attention was drawn to a Grey Plover and as I watched through the owner's scope it passed a single Ringed Plover; a sort of two for the price of one!  I concentrated on checking out the far water to the east of the hide where I found the feeding Black-tailed Godwits but, again, no Long-tailed Duck albeit I added a few Shelduck.

My final stop of the day was the Reedbed Hide.  Very few birds to be seen save for a Little Grebe the a handful of mallard making their way to the far corner of the water on my right and out of sight.  But I could not but notice that one of their number was a distinctive white about the head, could this be the Long-tailed Duck as I usually find single visitors associating with Mallards.  Camera to hand so just managed to get a couple f shots before the birds disappeared.  Looking at the individual and then the photograph I could see that this bird might well be mis-identified as a female Long-tailed Duck but it had a yellow beak, even if much narrower than a "normal" mallard's beak, and the colouring was not quite right.  Indeed, it had some Mallard-like patches.  Strange that this was the only hybrid-like duck I had ever seen here.  Calling in at the Visitors Centre I discussed my sighting and checked my photos against the various literature to hand but still not convinced.  Meanwhile, a couple of Chaffinch had arrived on the grass in front to the window.  At this point one of the wardens returned having been down towards the sea bank to take a photograph.  naturally, my homeward journey was slightly delayed as I, too, drive down to the far car park just in case the bird was still present.  A couple of birders were convinced that it had departed when one called me back to say he had one the bird in the far distance but, again, now departed.  I leave readers to pass comments on my hybrid photos. 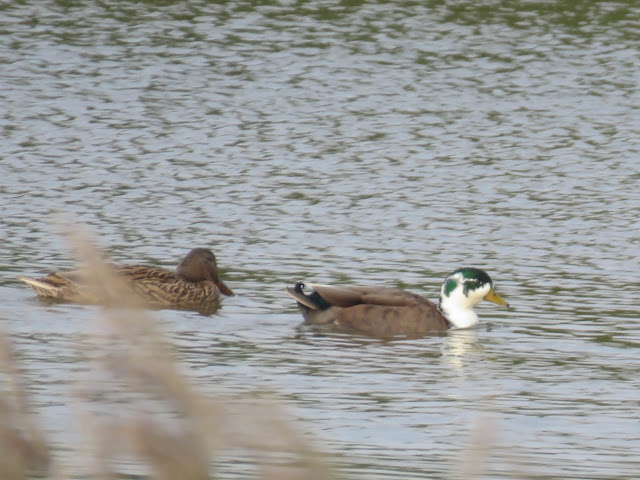 A cold but enjoyable morning's birding which also included a large number of feeding Wood Pigeon as I drove out of the reserve so bring up the day's total to 42.

Check out the accompanying website at http://www.birdingaxarquia.weebly.com for the latest sightings, photographs and additional information
Posted by Bob Wright - The Axarquia Birder at 03:38