Cloudy at first and a strong wind bu t the sun put in an appearance mid-morning and, for a time, the wind calmed down.  But, despite the weather, a very enjoyable visit, some lovely birds seen and most photographed, an eventual tally of 42 species for the morning.

Entering "Turtle Dove Alley" there were Rock Doves on the wires and a departing Cattle Egret along with a sizable flock of Spotless Starlings.  With the grasses blowing in the wind a good way down before a pair of Waxbill seen at the side of the road and, at the far end, a similar number of Red Avadavat.  Once inside the reserve straight to the bamboo hide overlooking the Laguna del Taraje, not just the expected Purple Swamphen and Red-knobbed Coot but a trio of ducks represented by Mallard, Teal and Shoveler.  A handful of Moorhen, a pair of Little Grebe and even a Robin in the nearby tree. 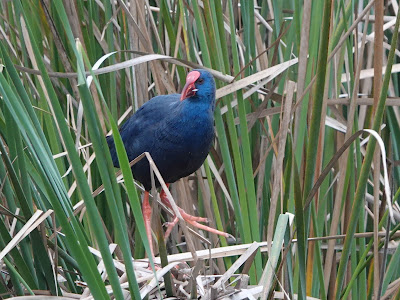 Then it was on to the large hide overlooking the Laguna del Alamo Blanco where, on this occasion, the White Stork took some finding as it was hiding at the very back, low down behind the tall reeds.  To the front, more Shoveler and Teal plus lots of Mallard.  And to add a little flavour a single Shelduck was also noted.  Over all this a solitary Heron rested on a high support keeping watch.


Noting the very many Chiffchaff and a couple of Blackbird on site as I walked round  to the main hide at the Laguna de las Aneas I was greeted by very many Common Coot and many more Mallard along with Moorhen, Little Grebe and a trio of Cormorant.  Just the one Yellow-legged Gull at the water and looking very smart.

A Cetti's Warbler was calling loudly and hidden away in the reeds to my left a lone Kingfisher.  A single Little Egret on the island in front of the hide and, feeding over the water, about a dozen Crag Martin.

The northern hide at the Laguna del Trebol managed to provide both a close Bluethroat and Grey Wagtail along with the resident Red-knobed Coots and Moorhens, excellent for the camera.  A male Stonechat also spent some time at the site and when the warden, Manola joined me he reported that there had been a double-special yesterday with the sighting of a Yellow-browed Warbler Phylloscopus inomatus in the avenue leading to the hide and another group of birders had found a visiting Little Bunting Emberiza pusilla whilst at the southern hide overlooking the same water.  On leaving the hide, I spent some time watching the many Chiffchaff feeding in the trees and also recorded Robin, Blackcap, Sardinian Warbler and a pair of Greenfinch.


Off then to the above-mentioned southern hide where I had more Red-knobbed Coots, another Purple Swamphen and a pair of Little Grebe.

A small number of House Sparrows visited the trees immediately on front of the hide and then close views of a quartet of Collared Doves.  Looking at a Moorhen at the back of the water I discovered the sleeping Snipe.  Then, amazingly, a small Chiffchaff-like bird landed for a split second immediately in front of me on a little reed on the water and was gone away to the left quicker than I can write this sentence.  But not before I had a good view of the double yellow wing bars and was able to identify the bird as a visiting Yellow-browed Warbler, presumably the same bird as seen yesterday.  Just a shame it did not stay the full couple of seconds to give me chance to lift the camera.


The final water on my circuit was the Laguna del Lirio where I found a couple of photographers.  Intrigued to discover on what they were concentrating, I moved across behind them to have a look and, sure enough, a family of five Ferruginous Duck were at the far end of the pool. Just to be obliging, the birds then paddled to our end and eventually were photographed alongside a handful of Mallard so giving a good size comparison.

With time to spare I then worked my way back to the Laguna del Alamo Blanco with a look in at the new approach hide where I recorded a Little Egret with the visiting Mallards and noted the quartering Marsh Harrier above.  It was on this second visit to the water that I found the hiding White Stork and also a pair of newly-arrived Gadwall.

And so to my departure where I found a trio of Crested Larks on the large shingle beach on the opposite side of the road and returning via Turtle Dove Alley also added a Hoopoe and, finally, a Buzzard before reaching the motorway to journey home.

Ducks seen during the morning:

Check out the accompanying website at http://www.birdingaxarquia.weebly.com for the latest sightings, photographs and additional information
Posted by Bob Wright - The Axarquia Birder at 13:05