With Jenny needing a lift to Spalding and the forecast no longer predicting rain today, and only twenty minutes from Boston, it really was a "no-brainer". So camera, bins and scope into the car and after dropping off the ladies for the shopping adventure I carried on to RSPB Frampton Marsh. Arriving at 9.30 it was cold, overcast and generally very dull with poor light.  But by midday the skies were clearing and the sun was putting its hat on and coming out to play.  Indeed, leaving the site at 12.30 I made a diversion on the way home to spend an hour at Rutland Water before returning home. A sort of farewell to Lincolnshire until I return once more in late December. And, interestingly, I saw more birds in my hour at Rutland Water (north Arm and Visitors Centre only) than I did at the three hours on the coastal marsh.

Approaching the reserve I had Wood Pigeons and Rooks and as soon as I entered the site Magpie, Carrion Crow and Pheasant.    A Blackbird flew away as I made a very brief stop at the main car park to check out the flooded fields in front and was immediately aware pf the large number of Wigeon and groups of Greylag Geese.  Lapwings were everywhere and resting on a distant post next to the barn a Common Buzzard.  Straight on down to the small car park near the high bank to check out both sides of the road with the scope and I confirmed good numbers of Teal and Shoveler plus a few Mallard.  The occasional Mute Swan was seen and confirmed that there were thousands on Lapwing on site plus a very large flock of Golden Plover.  A couple of Redshank worked the nearby pools and even a trio of Moorhen.  I even found the well-concealed Snipe.  To my left on the recently worked grassland a quartet of Little Egret and so up the high bank to check out the saltmarsh. 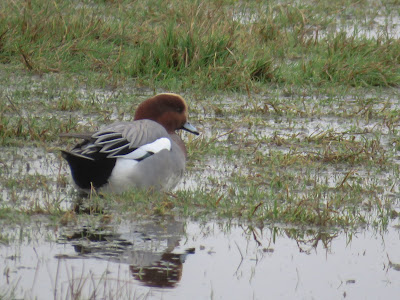 From the high bank I could see the three distinct flocks of feeding Brent Geese and the small number of birds on the worked field below where the site was having its ditches excavated.  I also managed through the dull light to find a Peregrine Falcon enjoying its breakfast a top a short post further out on the marsh.  At this point I had intended to return to the car and put away the scope before checking out the main hides.

However, meeting a birder waking towards me he informed me that the recently-arrived Long-tailed Duck was still on site and easily found, following his directions.  So onwards to said site and, indeed, the Long-tailed Duck was found busy feeding in a narrow channel accompanied by both Wigeon and Brent Geese - but working independently.  Despite the poor light I managed to get a record shot before deciding, having already covered most of the high bank, that I must just as well carry on and complete the anti-clockwise circuit back to the car. 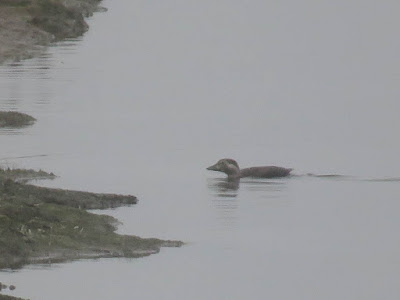 Very little to see from the East Hide other than more Brent Geese, Shelduck and a few Dunlin plus more Lapwing.  A small flock of Greylag Geese and some Black-headed Gulls and Starlings along with a single Avocet were also recorded.  Then I found the resting Canada Geese flock on the far side.  So on to the Reedbed Hide and the track in a very muddy state following the activities of the digger in the area.  Upon arrival at the hide I quickly added Little Grebe and Pochard but the main delight was the pair of Whooper Swans.  No sooner had I got my first photograph than a further ten individuals dropped in to make a fabulous, slightly distant picture. 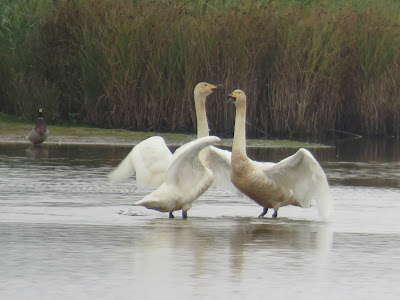 Next up was the nearby 360 Hide but, again, rather disappointing following all the recent management work which had also necessitated the draining of the area.  A few Redshank and more Lapwing along with a handful or so of Teal but also a small flock of Dunlin accompanied by a single Turnstone.  A couple of Meadow Pipits were moving around in front of me and then it was back to the car so I could move it up to the main car park.

From the Visitors Centre I noticed the large flock of House Sparrows and even had a Goldfinch on the feeders.  Finally, as I was departing the site I was seen off by a Collared Dove and a lone Kestrel watched my passing as I approached Spalding.  An interesting three hours, albeit in poor visibility but a final total of 39 Species.

Still only 12.30 and weather now much brighter and the promise of good, clear visibility during the afternoon under a shining sun so decided to head straight to Rutland Water for an hour to check out the North Arm and Visitors Centre before heading home in time to collect Jenny for her doctor's appointment at the local hospital. As soon as I reached the access to Burley Fishponds on the North Arm I was greeted by Rooks, Carrion Crows, Magpie and Wood Pigeons.  On the water a good number of Cormorant and mainly Great Crested Grebes and Wigeon.  A couple of Mute Swans drifted by long with the occasional Mallard and a small number of Coot.  On the grass a couple of Egyptian Geese were taking their rest with a small number of Greylag Geese nearby.  The main water, in addition to a handful of Mute Swan, held good numbers of Tufted Duck and a couple of Little Grebe with a Little Egret on the far bank.

Then on round to the Visitors Centre.  With the noisy wind blower in action outside the feeding station I entered the building to take a look at Lagoon 1.  Apart from the large numbers of Cormorant and almost as many Black-headed Gulls the water was relatively empty.  However, a good check of the area did produce Mallard, Pochard and Teal along with a single Great White Egret.  A Marsh Harrier settled below a marker pole and I then noticed a resting Heron sitting on its top.  Pride of place, however, went to the female Smew that just happened to make itself visible near the reeds away to my right.  meanwhile, a couple of Blue Tits were feeding in the well-berried tree in front of me and a Stonechat posed atop a bush near the water's edge.

So to the feeding station which, at first, appeared very quiet but soon returned to normal with a first visit from a lone Coal Tit then the regular arrival of both Blue and Great Tits and a single Marsh Tit.  Just a couple of Goldfinches but two Collared Doves also put in an appearance.  To my right the brief sighting of a skulking Wren then the arrival of a pair of Dunnock.  Next came the few Chaffinches and finally a single Robin.  Walking back to the car I had a large number of the resident Jackdaws overhead and also recorded both Blackbird and Starling.  Just the hour at Rutland Water but managed to record one more species than I had during the three hours at Frampton Marsh, so giving a total species for the day of 58. 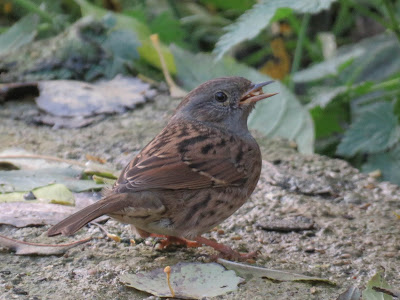 
Check out the accompanying website at http://www.birdingaxarquia.weebly.com for the latest sightings, photographs and additional information
Posted by Bob Wright - The Axarquia Birder at 02:31