With the sun already shining in a clear blue sky and, at last, the wind abated I set off for a morning at the Laguna Dulce near Campillos just after 9 am.  Already up to 11C as I departed but upon arriving, having received a frost warning in the car when the outside temperature dropped to 3C at the top of the long climb up from Malaga, I arrived jut before 10.30 to be greeted by 5C, lots of birds on the water but very cold when standing at the hide as my hands gradually turned to ice.  But it was worth the effort and by the time I returned to Mezquitilla in mid-afternoon the temperature on the coast was up into the low twenties.

Checking out the water, try as I might I could not find a single Great Crested Grebe; scores of both Little and Black-necked Grebes but not a single sight of their larger cousin.  On the other hand, in addition to the hundreds of Coot, I had a marvellous selection of ducks.  Very many Mallard and Shoveler and diligent searching produced about a score of Common Pochard,  handful of Red-crested Pochard and a single Shelduck.  No Teal but a good number of Gadwall.  However, despite losing count at in excess of 250 White-headed Ducks my pride of place probably went to the score or more of Wigeon, not a bird I find that often in southern Spain, but then welcome sighting of a quartet of Garganey, my bird of the day.

Whilst a good number of Crag Martins were feeding over the water and both Chiffchaff and House Sparrows were foraging below me in the greenery along with calling Cetti's Warblers, I looked up to watch the passing female Marsh Harrier.  This reminded me of the Black-shouldered Kite that I had just past on top of a wooden telegraph pole as I drove through Santa Ana just down the road.  A single Moorhen wandered out towards the hide whist on the opposite side of the nearby bay to my left an arriving Lapwing also drew my attention to Black-winged Stilt, Ringed Plover and both Grey and White Wagtails working the shore. A little further behind them working both shore and hedgerow was a small flock of Meadow Pipits.

Next job to find the wintering Common Cranes.  To the very far right-hand corner a tight group of about thirty Flamingos were busy feeding and to their rear four Common Crane.  At that moment a half-dozen flew across the water, right to left, so I knew the main flock had to be somewhere in the immediate area.  Meanwhile, there was a presence of about 100 plus Black-headed Gulls to the rear of the water and as I looked I could still be not unimpressed by the huge swathe of White-headed Ducks which seemed to stretch right across the back of the water.  Time to drive over to the far side and take the farm track towards Fuente de Piedra but first a check in the shrubbery behind me where I duly found a lovely Zitting Cisticola.

Moving along the back of the water I quickly found both Crested Lark and Stonechat and the first of three good-sized flocks of Linnets.  A trio of Collared Doves were resting in trees near the farm to my left at the crossroad and, as I watched, a pair of Raven with a quartet of Jackdaws above the moved to the the left.  As the Ravens continued the Jackdaws joined a few more of their number also at the above farm. 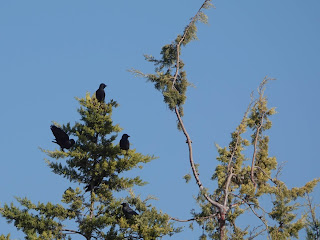 At about the same time I found the grazing flock of at least an hundred Cranes near the back of the water.  As I watched a good section moved away to the front of me and I discovered two further large flock so bringing the Crane total up to well over 300. 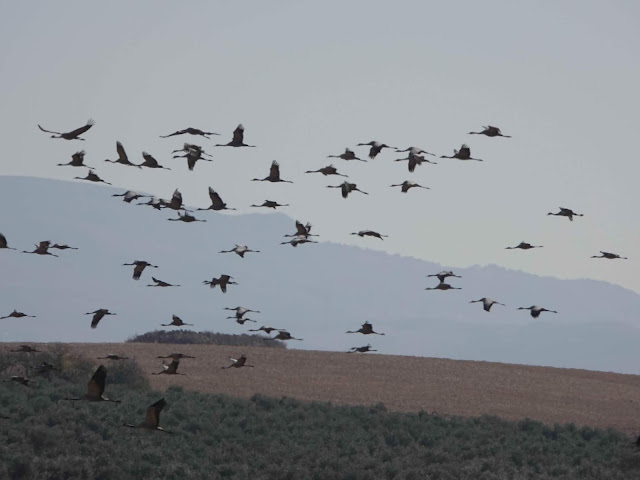 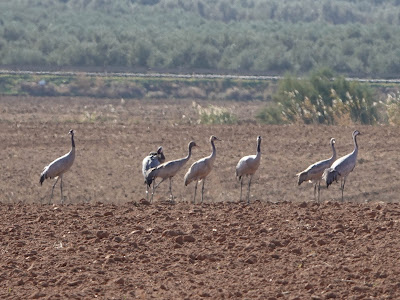 Continuing on down the track nothing to record at the old ruin though I did pick up a solitary Buzzard resting on a relatively recently-ploughed field.  A good number of Jackdaws were seen at the "nesting tower" along with a few Spotless Starlings.  More Linnets and then both Serin and Goldfinches before re-joining the road and taking the anti-clockwise circuit to the salinas of Fuente de Piedra. 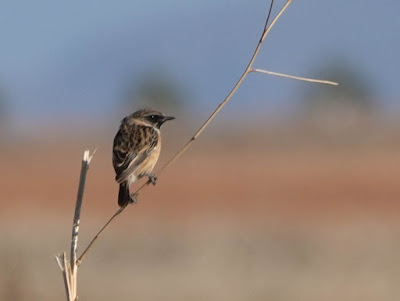 Unlike the Laguna Dulce, Fuente de Piedra was almost devoid of water, just a couple of large puddles and the entrance fields and scrapes completely bone dry.  The only birds to be seen on the "lake" was a tight mixed flock of mainly Lesser black-backed and Black-headed Gulls.


So round to the back and the laguneta where, even here, the water level was conspicuous by its dramatic fall in level.  Never mind islands, all we now had was a couple of small humps on the barren bed.  On the remaining water mainly a few Mallard, Shoveler and Coot along with little more than a handful of Flamingos.  A Lapwing walked the nearby shire and in the bushes the occasional Linnet and House Sparrow.


Walking back towards the car both Goldfinch and a couple of Greenfinch were recorded then a male Sardinian Warbler and a number of feeding Blackcaps in the olive trees.  A female Black Redstart put in an appearance and a male Blackbird made a hasty retreat as a Kestrel drifted overhead, so bringing up the day's total to 45 species. 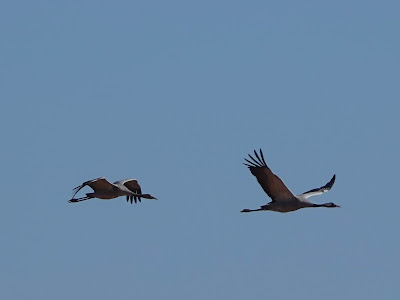 Check out the accompanying website at http://www.birdingaxarquia.weebly.com for the latest sightings, photographs and additional information
Posted by Bob Wright - The Axarquia Birder at 02:49