A very early start for the long drive down to the Cazalla watch point above Tarifa to join the Andalucia Bird Society's September meeting.  A very good turn out in cloudy conditions and we even had the benefit of a couple of Azure-winged Magpies crossing the road on the outskirts of Marbella.  But still good to meet up with lots of friends who I have not seen for weeks, months or even years.

The day started slowly with the occasional Barn Swallow and then our first close sighting of a large, very pale, Short-toed Eagle.  Soon we had numerous Common Kestrel and Sparrowhawks moving about the hillside and eventually also added both Booted Eagle and Egyptian Vulture.  Ere long we had our first of very few Griffon Vultures.  Meanwhile, the Cattle Egrets seemed happy in the valley below and to our left (sea side) the pair of hunters out after a rabbit or two disturbed a Red-legged Partridge which bade an early retreat form the danger zone. 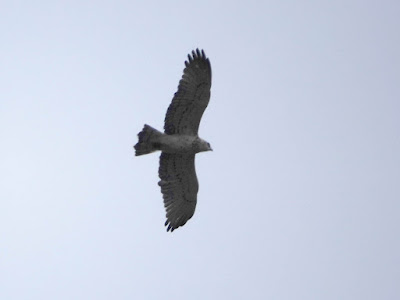 Leaving the rest of the group we three, accompanied by Helen Burgers and John and Sally Slatterley, took off to take a look at what me about in La Janda rather than straight to Barbate with the main group.  A couple of  Buzzards noted on the drive along with House Sparrow, Collared Dove and large flocks of Spotless Starlings.


Once at the top of the track leading down to the canal no surprise to find Stonechats on the posts and fences and very large flocks of mixed, mainly Spanish rather the House, Sparrows.  A few Crested Larks on the track itself and near the bottom both Goldfinch and Linnet recorded.  Indeed, approaching the end I was in time to see the rapid departure of a Green Sandpiper from the neighbouring ditch to the right.  However, a couple of Short-toed Larks were a pleasant surprise.


From our observations once a the canal we quickly added both Little Egret and Heron followed by a couple of Mallard further up stream.  A Dutch birder already on site reported that as we approached a Spanish Imperial Eagle took of from the other side of the main canal.  Also present a good number of resting White Storks and lovely to see large groups making a kettle (soaring in a circle) before streaming away.


On the far side the first of at east six Marsh Harriers was recorded and making our way along the track numerous Common Kestrel and more Spanish Sparrows, Zitting Cisticola and even a Kingfisher flashed past the two cars in the deep ditch to our left (canal on the right).  Up on the wires, as well as Kestrels, both a singe Corn Bunting and Turtle Dove were seen.


Once up towards the "smelly farm" we, as expected, added both Red-legged Partridge and Pheasant and at the farm itself the resident Jackdaws and Rock Doves.  A "strange looking" eagle was resting on a pylon a little way back but had moved on by the time I lifted the camera for a record shot.  Then it was down to the end of the road and just before the and our first sighting of a Black-shouldered Kite.  The raptor moved off but we found it again once round the corner towards the bridge over the small steam and all were able to take photographs.  The a stop at the river itself where, from the lower bank, were able to not only find a small group of Little Egret but also a half-doze Glossy Ibis.  meanwhile, in front of us a couple of magnificent Montagu's Harriers were quartering the grassy slope.

Leaving the sight to move on to Barbate, we had hardly set off on the road when we found a juvenile Woodchat Shrike on the fence and an on the other side of Benalup added the flock of Wood Pigeon that were flying across the road.  At this point, Helen and company carried on towards home once on the N340 and we made our way to Barbate where we found the tide well out.  Driving straight to the track at the back of the pools o the east of the town we could see plenty of distant Flamingo and a nearby Audouin's Gull.  Using the scope we managed to locate a couple of Stone Curlew on the nearest island and a handful of Avocet and Black-winged Stilts to the left before heading off to to the far end of the track where most gulls and others could be seen in the far distance.

Upon arrival we discovered not only the large flock of mixed gulls, including Black-headed, Lesser Black-backed and Auduoin's Gulls but also most of the other members of the ABS who we had last seen up at Cazalla.  Franky and company had found a nearby Northern Wheatear and looking at the Pied Flyctcher in a nearby tree I also found the Whinchat in the small tree immediately in front.  Out to my left on the green covered water both a Little Ringed Plover and Little Stint were seen and another member had found a Redshank.  But perhaps the best sighting f all was the lone Osprey that was standing on the sandbar immediately behind the gulls.  (Now why did I not walk back to the car and collect my camera?)  After a very long rest the bird then moved at least fifty metres to stand in the water in front of us; maybe 100 metres away but in a clear line of sight.  Whilst we had seen some birds missed by the others the main group had watched a flock of 50 Black Kites pass low overhead whilst near the coast at the Migres office.  What a wonderful way to end a most satisfactory and enjoyable  day in good and pleasant company.


Check out the accompanying website at http://www.birdingaxarquia.weebly.com for the latest sightings, photographs and additional information
Posted by Bob Wright - The Axarquia Birder at 09:56