A beautiful, warm sunny day to be out with our guide, Jimshaw for the day with a morning visit to the  Chorokhi Delta followed by an afternoon exploring the wonderful scenery of the mountains and waterfalls close to the Turkish border.

Arriving for the south of Batumi to the pools at the northern end of the delta close to the town's rubbish dump, we immediately had views of many Yellow-legged Gulls and Black kites.  Once out of the car and looking at the narrow, reed-bordered stream below and sea and pools to our right we immediately picked up more Yellow-legged Gulls along with a few Little Egret, a couple of Great Crested Grebe and a number of Hooded Crows.

Looking at the water below us we found a pair of Kingfisher which appeared much larger than we are used to seeing and I suspect an adult still feeding a well-grown youngster.  The bird remained in sight for most of the time we were present.  A small flock of Mallard flew over our heads and a White Wagtail was patrolling the edges.


Then it was back in the car to drive past the airport and on towards the bridge over the Chorokhi river and take the long track down to the shore.  Whilst a handful of military were still working to clear the former Soviet military base of, presumably, land mines and other ordinance we had a female Marsh Harrier resting on the ground.

To our right the first of many Red-backed Shrikes seen during the next hour. 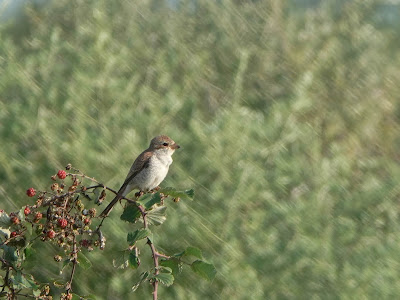 A Hobby was seen perched in a tree and within minutes we had more Red-backed Shrikes followed by a Sparrowhawk.  Much discussion on the sight of another large hawk which our guide suggesting a juvenile Goshawk and, indeed, the photos would seem to support the identification rather than a juvenile Sparrowhawk.  Moving on we were in time to see a rapidly departing Turtle Dove.

Stopping at a large, weed covered and shallow pool we sound found half a dozen Wood Sandpiper and then a similar number of Coot.  However, closer inspection with the scope enable me to find one of the rare-for-the-area Purple Swamphens.

The next pool up and close to the shore presented many Yellow-legged Gulls and Hooded Crows at the latter whilst, in addition to more gulls and Cormorant plus a couple of Little and Great Crested Grebes, we also had a small flock of feeding Little Terns.  A lone Heron was resting to our right and on the coast a passing flock of Sanderling and a couple of Isabelline Wheatear.

Our final part of the exploration of this boggy grassland with thick bush cover produced a Common Buzzard and Black Kite overhead and then a stop to take a closer look at a perched Roller.


Our last bird seen on the site was that of a Hoopoe and, indeed, the only bird recorded up in the mountains was a Jay.


Check out the accompanying website at http://www.birdingaxarquia.weebly.com for the latest sightings, photographs and additional information
Posted by Bob Wright - The Axarquia Birder at 07:50