The hills opposite Mtskheta, Georgia

A Uber-type taxi this morning to 25km north-west of Tbilisi at the Monatery of Jvari on top of a hill on the opposite bank of the river Mtkvari to the (very) old capital of Georgia at Mtskheta.  Amazing to think that it cost us all of 4.50 Euros!  Tourists were already in mass attendance as the early morning rain had long since departed and the promise that the cloudy skies would become very warm by mid-afternoon.  But after a tour of this amazing building, having already recorded the local Hooded Crow, we left the public behind and set off to the relatively nearby lake in search of our birds for the day.  But, before departing, we were able to look down on the rove and record the many Yellow-legged Gulls, a couple of Grey Heron and at least a handful of Little Egret.  Above and below us a couple of small parties of calling Bee-eaters made their presence known and Marieke even recorded the few Common Swifts, I was to see them later in the day. 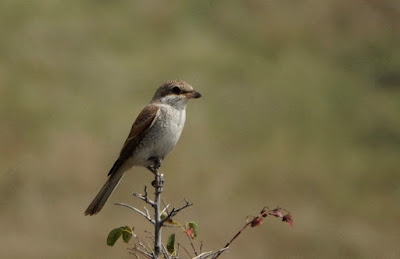 Once sorted on our way we stopped to see a couple of very close Isabelline Wheatear and making our way down to the now dried up small lake we had close views of juvenile Red-backed Shrike.  Also lurking in the low, thick gorse bushes was a small brown bird which was only identified in our returns a Nightingale.  Overhead we had our first raptors with the appearance, we're pretty sure, of a pair of Bonelli's Eagles.

Truth be told, it was all very quiet which we much appreciated with more regular sightings of Red-backed Shrikes.  A Jay flashed through the nearby woods and much time was pent trying to identify what was obviously a family trio of buzzards.  A mixture of calling, sighting and eventual look at the distant shots taken on the Sony RX10 convinced us that we were looking at resident Long-legged Buzzards.

And that was probably it till we arrived back at the car park to the monastery where we , as above, eventually identified the smallish brown bird as a Nightingale and had more views of the Isabelline Wheatear.  The Long-legged Buzzards were still up in the air and then, immediately below us, first a moulting White Wagtail followed by a pair of Hoopoe.


Check out the accompanying website at http://www.birdingaxarquia.weebly.com for the latest sightings, photographs and additional information
Posted by Bob Wright - The Axarquia Birder at 11:35