Ten days after visiting the Cazala raptor watch point above Tarifa on the western end of the Mediterranean Sea I find myself on a mountain top at Sakhalvasho about 16km north of the city of Batumi, Georgia on the eastern coast of the Black Sea.  What a difference.  Sakhalvasho is the now place to observe raptors by the thousands as they make their autumn return migration to Africa and amazing to think that the site was only really discovered as a birding hot spot about ten years ago.


Our first visit was on Sunday, the day after arriving by train from Tbilisi, and the forecast was absolutely awful with the promise of torrential rain and storms.  However, arriving on the mountain top at 8.30 and greeted by Black Kite and Marsh Harrier along with calling Bee-eaters not a sign of rain.  Lots of cloud but quite calm.  And so it remained until we set off back to the old town of Batumi at 3.30pm.  On the other hand, the overcast weather of low cloud seemed to have held up most of the birds and looking at the final count for the day it was then lowest total since 23 August.  Indeed, check out the "Batumi Raptor Count" site for the day and you will see that the reporters actually use the word "boring!"

Whilst we had regular passages of Bee-eaters and Barn Swallows and a good number of Rollers later on, most off the raptors, save for an early morning passage of harriers were very high and lost in the cloud.  To say that I was amazed by the eventual total is an understatement.

Of the birds seen, most were Black Kites followed by Honey Buzzard but it was lovely to see a number of Sparrowhawks and old Spanish favourites such a Booted Eagle, Short-toed Eagle and a Black Stork.  In addition, I did get to see my first Steppe Buzzard but only as a result of it being pointed out by one of the very experienced raptor recorders.

The "Official" count for the day (4691) was as follows (small birds are not counted):

So what did I make of this my first experience at Sakhalvasho?  Most of the passing birds are high, indeed very high and you certainly need a scope and experience in identifying raptors by silhouette and movement.  Very few came close enough for good sightings by binoculars never mind the naked eye.  Counting was undertaken by a good-sized group of experienced birders with set target areas to observe and then results are coordinated and collated for the final total.  On both days there were at least ten recorders and a combined total of at least twenty birders.

For me, migration of raptors at Sakhalvasho was about the actually movement of the birds.  You would see numbers gradually increase as raptors formed kettles (groups spiralling upwards on thermals) before achieving their desired height whereupon they would then stream southwards, usually just about the mountain summits but also passing through the valley below us.

And whilst the birds were above and around us, very close to hand, within a couple of metres, was a couple of dragonflies resting on cut stalks.  But what might they be?  Perhaps a reader with more expertise will let me know so that they can be properly identified. 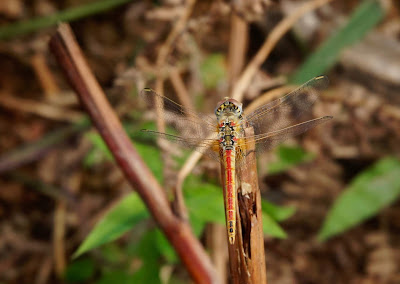 Monday was a completely different kettle of fish (I wonder how that expression came about?) with lovely warm sunshine and increasing cloud over the mountain top.  The birds could now be seen settling and streaming southwards and even a few lower individuals for the benefit of birders like me with good views of both Sparrowhawk and Hobby plus a late low-flying Osprey towards the west and sea.  Again, hundreds of Bee-eaters along with a smaller number of Barn Swallows and even an early morning passage Sand Martins.

In addition, more Booted Eagles and another Black Stork along with Pallid, Montagu's and Marsh Harriers.  However looking at the final total for the day it would appear that another visit by Crested Harrier had also been recorded.


But, of course, this is only a brief snap shot based on two days.  I am sure that there must be occasions when the raptors do fly low just as in the same way, especially following bad weather when the birds are held up at the coast, when you can see streams of raptors and other birds making the relatively short crossing to Africa from the southern coast of Spain in the Algeciras - Tarifa area.

Check out the accompanying website at http://www.birdingaxarquia.weebly.com for the latest sightings, photographs and additional information
Posted by Bob Wright - The Axarquia Birder at 21:37