Still dark when I arrived at 7.45, no sign of any Red-necked Nightjars as I drove along the track from the airport end, and at the ford across the river above the airport near Zapata almost immediately welcomed by the ghostly apparition of a Little Egret as it casually drifted up river.  Then, as the light began to improve, a lone Green Sandpiper landed at the water's edge to start feeding.  Time to exit the car and wander up towards the weir now that there were signs of movement and ere long had a handful of feeding Moorhen and a couple of Mallard dropped on to the river.  On the far side whilst looking at the single Grey Heron I noticed that it was accompanied by a couple of Night Heron with a further couple in the next tree.  At that point five more Night Herons flew off further upstream.

By now I had been joined by a couple of Little Egret on the far side, more Moorhen and then both a single Green and Common Sandpiper on the weir itself.  All this whilst a couple or more Cetti's Warblers were blasting away behind me.  A few Coots on the water, a resting Yellow-legged Gull and then the arrival of a single Cattle Egret to join its cousins.

All now quiet so moved on towards the airport to check out the reeds before heading south to the Guadlahorce reserve.  House Sparrows and a mixed flock of Goldfinch and mainly Greenfinch followed by a handful of Serin.  A single Red-legged Partridge was busy trying to find a way off the track to get away form the car but had to keep moving till it found the end of the fence near "Short-toed lark Corner" but also revealed a couple of Blackbird.  But only the single Collared Dove seen.

Walking up the bank to enter the Guadalhorce reserve and take the track towards the footbridge immediately a lone kestrel resting in a dead tree on the opposite bank.  Then over the bridge with a single Grey Heron below me and just the one Rock Dove/Feral Pigeon on the motorway bridge I made my way to the Laguna Casillas hide on the eastern arm.  At first it appeared to be just the lone sleeping Common Pochard but then I noticed that hew was joined by resting Coots and a sleeping Little Grebe.


Away to my distant right was a sleeping Booted Eagle and I began to think I, too, should still be in bed!  But, moving on, I then picked up the Kingfisher on the opposite bank along with a family of Little Grebe and, wonder of wonders, a pair of Pintail dropped in to keep me company.

Moving on to the Wader lagoon I started by counting the 10 Black-winged Stilt before adding a couple of distant Cormorant before a boisterous flock of two dozen Monk Parakeet screamed over.


The Rio Viejo (Old River) produced a further 24 Black-winged Stilt along with a single Avocet and a small flock of Sanderling.  A few Black-headed and Lesser Back-backed Gulls plus a couple of Ringed Plover completed the sighting before continuing on to the Sea Watch.  All very calm and nothing about so returned to the previous two hides recording a Hoopoe, Zitting Cisticola, male Sardinian Warbler and a small flock of Greenfinch on the way.  At the Wader Hide I noticed that the Pintail had moved across and even a couple of Teal now on the back water with a single Little Ringed Plover below me.


So off to the Laguna Escondida hide as I rounded the corner away form the main track I cam across a small party of Blackcap.  Not only dd the Blackcaps change trees but, all of a sudden, a male Sparrowhawk shoot across the track in front of me and disappeared to my right; presumably he had been lying in wait for a Blackcap breakfast!  The water itself contained an early arrival of a score or more Shoveler in addition to a few Mallard and a couple of Gadwall at the back.  Closer scrutiny with the scope also picked up a single female White-headed Duck and more Coot.

So, finally, to the Laguna Grande and main hide picking up a single Whinchat almost as soon as I left the hide.  By now there were maybe a dozen or so Cormorant along with at least three Heron and the same number of Little Egret.  On the near water a further 30 Black-winged Stilt and to the back 17 Flamingo, what looked like a creche of mainly young juveniles. 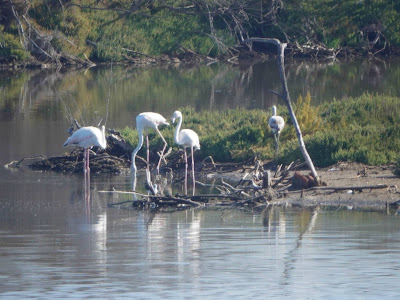 Lots of Collared Doves and a small flock of Spotless Starling before I found the lone White Wagtail.  Few gulls, mainly Black-headed, but I did record the pair of Slender-billed Gulls.  In the tree at the back a resting Booted Eagle that took a short flight before returning for more sleep.  The final sighting was that of a pair of Barn Swallow that flew past the hide before I made my departure at 11.30 before the day became too hot for comfort and so giving me a grand total of 48 species for the morning.  But,upon arriving back at Mezquitilla, the resting gulls on the beach almost in front of the house, mainly Yellow-legged and a few Lesser Black-backed, also included a small number of the resident Mediterranean and even a quartet of Audouin's Gull so bringing the final tally u to the half-century.  All turned out to be a lovely relaxing birding morning on my own.