Just back and my first message is from my friends John and Jenny Wainwright with a short report on their Sunday visit to Turron/Tajarja area.  Looks good to read about Little Owl, Green Woodpeckers and Short-toed Eagles.

A very hot and dusty day today.  Not a lot to be seen along the autovia but en route to Turron via Morelada we saw Collared Doves, House Sparrows and Spotless Starlings.

Nothing in the "Saker" cages, or at the ruin, but lots of Crested Larks in the fields just prior to the track and the turning through the campo to Castillo de Tajarja.  As we approached the ruin, two Little Owls were noted but they had dropped out of sight before we got to them.  So we turned left at the solar farm and quickly spotted an Iberian Grey Shrike and several Common Magpies on the camera heads.  We then took a track that we had never driven down and to our right another Little Owl was logged,  atop a large dirt-pile, then a couple of Goldfinches and some Blackbirds.  Woodpigeons were in good numbers, most of them were feeding in the recently harvested fields.  A little later, we surprised two Green Woodpeckers that were feeding on the ground under the olive trees, while above them Jenny spotted a soaring Booted Eagle.  There were a few Barn Swallows about as were Common Swifts and another ruin held Jackdaws and a Common Kestrel.  As we passed over a dry streambed Nightingales were heard singing but no sightings today.

Another two Little Owls were then seen in a broad-leafed tree along with Sardinian Warblers, Greenfinches and Goldfinches.  As we approached a bend in the track an Ocellated Lizard sat there, and gave us ample time for photos before it scarpered back into the undergrowth.  On the wires Collared Doves and two Turtle Doves were logged just before the main road.

Heading into Tajarja on the pylons we saw two Short-toed Eagles, another Iberian Grey Shrike, a few Bee-eaters and a Corn Bunting. 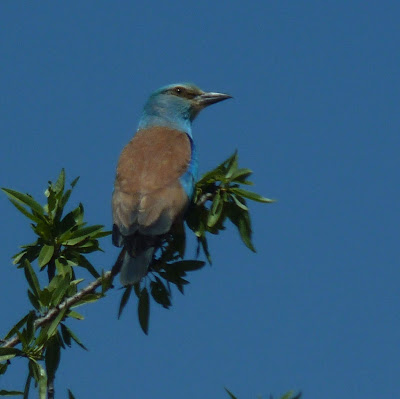 After coffee in the village we headed back in the same direction and took a different track.  Here we spotted number six Little Owl sitting under an olive tree, then two Jays were logged, more Blackbirds and another Common Kestrel.  As we passed a small group of olive trees a Roller flew past us and landed in a tree not fifty yards away it then moved away to be joined by another one (a female) and posed for us on the top of an olive tree.  While we were scanning the fields for more Rollers a Stone Curlew was noted; this was the male as we located the female even closer, but hunkered down in a depression.

As we were coming back into Turron several pairs of Stonechats and Crested Larks were seen.
We stopped for lunch at the exercise equipment and as we were lunching a pair of Golden Orioles landed in a pine tree to our right, they flitted about for several minutes before moving off down the valley.  Here we had Azure-winged Magpies, Greenfinches, Serins, Jackdaws, a Hoopoe and down the track a Common Buzzard was seen.

Maybe not a great total, but some great birds. And by the way we have never seen so many rabbits as we did today, there were literally scores of them.


Great report from John and I especially like the shot of the Stone Curlew.


Check out the accompanying website at http://www.birdingaxarquia.weebly.com for the latest sightings, photographs and additional information
Posted by Bob Wright - The Axarquia Birder at 07:24